Jack Bruce is one of the most enduring artists to emerge from the 1960s. A prolific songwriter, bassist, vocalist and an artist comfortable in just about any genre, he is best known for his time in the iconic British rock trio Cream.

Bruce’s initial musical forays into London in 1962 were in trad-jazz groups. He sat in on performances with Dick Heckstall-Smith and Ginger Baker before the three became members of the seminal British blues group Alexis Korner’s Blues Incorporated. During Bruce’s tenure the lineup also included the likes of Graham Bond, Cyril Davies and future Rolling Stones drummer Charlie Watts.

As successful as Blues Incorporated was in London, Baker had other ideas and, unbeknownst to Bruce, most of its members were about to splinter off and form the Graham Bond Organization, which upped the ante with Bond, Baker, Bruce and Smith joined by another refugee of jazz, John McLaughlin (of Mahavishnu Orchestra fame). Bruce then switched to six-string bass while Baker was experimenting with the extended drum solos he would perfect in Cream. Bruce also penned an early version of “Traintime” which he would resurrect with magnificent results later.

Cream played its first official gig in July of 1966 at the Twisted Wheel in Manchester and their final show at the Royal Albert Hall in 1968. The band broke up after this short run, but they left behind one of the most praiseworthy catalogs in modern music history.

Since leaving Cream, Bruce has recorded many successful solo albums and was also in the group West, Bruce & Laing (with Leslie West and Corky Laing). He has played and recorded with scores of jazz artists including groundbreaking work with Tony Williams and Carla Bley. His newest project is Silver Rails (Cherry Red Records), his first solo studio album in 10 years, which is drawing unanimous praise as one of his best. 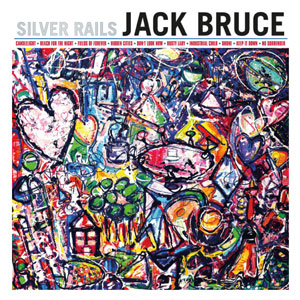 Long Island Pulse: Why did you decide to record a solo album after such a long time?
Jack Bruce: I’ve been following other paths. I have played hundreds of shows with my Latin band The Cuicoland Express and toured from Brazil to Japan with my Big Blues Band. During that period I also released several live albums and decided it was time to make a studio album.

Pulse: You always attract great people to collaborate with. Silver Rails features Phil Manzanera from Roxy Music…
JB: I first worked with Phil years ago on a show in Seville called Guitar Legends. We backed up Bob Dylan, among others, and I always wanted to work with him again. Two years ago we went to Cuba and played with Enrique Gonzalez and became good friends. When “Candlelight,” the first track on Silver Rails was written, I knew I had to have him play on it. The calypso, island feel is just right up his street and his solo is unforgettable.

Pulse: It seems you tend to work with musicians from varied backgrounds. In addition to blues and rock, you’ve worked in jazz.
JB: I always jokingly say “I don’t play jazz, I play Jack!” I don’t consciously change my style for different genres. I just try to fit in and make the other musicians sound as good as possible.

Pulse: Did you ever consider working only in jazz, like John McLaughlin?
JB: Blues Incorporated had Mingus-like elements. It was very much a learning experience because I was still very much into free jazz—Ornette Coleman—and it was difficult for me because I didn’t know enough about the blues. But that made me fall in love with the blues and want to know more. After my beginnings in jazz and classical, I decided to try and forge my own kind of music. That’s what I managed to do with Cream and it’s what I’m still trying to do.

Pulse: What was it like to work with Ginger Baker?
JB: We were good friends and Ginger, being older than I, became my rhythmic mentor. His playing was phenomenal and he played a drum kit he had built himself! I was full of admiration for him.

Pulse: You also played briefly with John Mayall & the Bluesbreakers when Eric Clapton was in the group. What was that like and why didn’t it last?
JB: I thought Eric was the leading blues guitarist of his generation and it was great to play with him. However, he had planned to take off on a world tour. (He got as far as Greece and told me he returned to England because he saw a butcher’s shop swarming with flies!) I really lost interest in the Bluesbreakers after Eric left. When Manfred Mann asked me to join his band I agreed. It was fun being in a successful pop group but when Ginger asked me to form a band with Eric, which of course became Cream, I jumped at the chance.
Cream was very much Ginger’s project. Ginger had the idea of forming a band with Eric… and Eric said, “Yeah, but Jack’s gotta be the singer.” Ginger and myself had fallen out quite badly so Ginger then had to come and ask me to sign with the band. Although we got known, when we were together for these very long jams, I think it was the songs. I think the things that actually stand the test of time are the songs. I’ve always considered myself a working musician. Cream was a kind of aberration, really. It was very successful in a commercial sense, but I never planned to be a commercially successful musician. It was just something that happened accidentally.

Pulse: The Cream reunions in 1993, at Rock Hall inductions, and 2005, in NY and London, went well. Is it true another reunion was about to happen but Baker somehow caused a problem with Clapton?
JB: I’d always be happy to play with those great guys again, but you’d have to ask Eric or Ginger about the second part of your question. The induction was sweet. I thought it was an emotional experience for all of us. You had to remember all the good times without the problems. I was quite happy with the 2005 reunion and the love we all felt from the audience was incredibly moving.