Nightmare and the Cat
Simple
nightmareandthecat.com

Let’s face it, not every band that includes the offspring of rock royalty lives up to the hype. The Webb Brothers (sons of Jimmy Webb) made one album and disappeared. TAB the Band (featuring the sons of Aerosmith guitarist Joe Perry) were so bad they changed their name to Dead Boots and hoped no one would notice. Julian Lennon? Damian Marley? Had a hit lately? If the title track off their debut album is any indication, Nightmare and the Cat might be that rare apple that didn’t fall far from the tree.

Raised in London and currently residing in Los Angeles, the core members are Django and Sam Stewart, the sons of Eurythmic Dave Stewart and Bananarama’s Siobhan Fahey. Rounded out with three other members, main vocalist Sam said he “wanted it to be a mixture of Jeff Buckley vocals and the Pixies’ music.” To us it sounds like the singer of Muse fronting MGMT at their most playful and poppy. Capitol Records has already signed them to a deal and is releasing the album on July 8. Or catch them the day before opening for Neon Trees at Central Park Summer Stage. 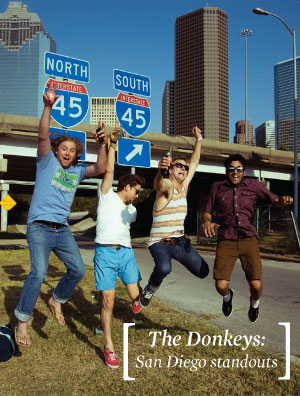 The “California sound” is hard to encapsulate, but whatever it is, this quartet has it. Given the fact that they’re often compared to bands like The Grateful Dead (San Francisco), Pavement (Stockton) and Crosby, Stills, Nash & Young (Los Angeles), plus that they’re from San Diego, one would think the Golden State would be all over their recently released fourth album. However, there’s something a little more sinister about the songs on the appropriately titled, Ride the Black Wave. Where on previous efforts the band had a psychedelic, sunshiny sound, songs like “Scissor Me Cigs” and the title track feel cultured and focused. They can still strike a playful pop note however, and this record might introduce them to a wider audience. We expect to see that when the band plays the Brooklyn Knitting Factory on July 16.

It’s been more than three years since this Brooklyn trio put out a record and not only was it well worth the wait, we think this will be the album that makes them indie-rock icons. Originally started as a bedroom recording project for front man Peter Silberman, this is the band’s third release as a group. The new songs are still filled with Silberman’s angelic falsetto and forlorn lyrics, but the band’s musical repertoire has expanded to include horns and fuller instrumentation. Their tunes often sounded like hipster lullabies in the past, but on Familiars (check out “Hotel” and “Palace”) they are accessible without losing artistic cred. They’ll be wrapping up their tour with a homecoming gig at Webster Hall on July 26.