Dom Famularo is a smiling, swirling, stick twirling supernova. Between the frequent drum clinics and speaking engagements that have him globetrotting from Port Jefferson to Peru and his bustling teaching practice, Famularo reaches thousands of drummers every year with his world class chops, ebullient personality and message of pure positivity. The 61-year-old Famularo works out of the drum school/studio/bunker he’s tucked into the side of a hill in his expansive backyard. It’s from this space that he operates as a premier drum educator.

As such, Famularo is a proponent of the Moeller method, a drumming technique adapted from Civil War drummers by Sanford A. Moeller and popularized throughout most of the 20th century by modern drumming patriarch Jim Chapin. This hard-earned method encourages a softly rounded arm/hand posture that can be described as “hugging the cat,” which allows the hands do less while the drumsticks do more. Once mastered, the Moeller method leads to the holy trinity of percussive nirvana: More speed, more accuracy and more energy. And energy is Famularo’s primary export.

“Every day to me is extremely exciting,” Famularo exhorted as he detailed his endless projects, travels and teachings. “I live my life with true enthusiasm. As long as I keep feeding myself knowledge and inspiration, I keep going. I think I got another twenty years in me.” 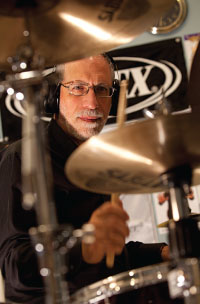 Over time, Famularo honed his craft, hung around the scene and became an integral part of the drumming elite. While his might not be a household name, Famularo holds his place at the fore of the drumming brotherhood. “[Long Island drum teaching legend] Al Miller introduced me to Buddy Rich. That opened up to a whole different world. I met Carl Palmer, Steve Gadd, Max Roach, Art Blakey, Elvin Jones, Philly Joe Jones… all drumming royalty. Ellington would be [backstage], Count Basie. Buddy was connected with Sinatra. You got to meet these incredible talents. So the passing of lineage to me, that’s what’s thrilling. And the Long Island thing was a big part of it.”

Famularo has shared more than a few licks with many of Long Island’s best drummers. He’s helped many of them on their journeys and his take on this uniquely suburban/percussive phenomenon has real roots. For Famularo, it simply comes down to space.

“Long Island has access to New York City, so we can hear the greatest musicians in the world,” Famularo said. “Then we can come back and have room at home to practice drums. It’s not tenement or apartment living. We’re not cramped and restricted by sound limitations. You can go in the basement and woodshed!”

But as a teacher, drumming is only half of Famularo’s story. What he’s really sharing through all this shake, rattle and roll is his worldview, one that evokes the teachings of self-empowerment gurus like Wayne Dyer and Eckhart Tolle. Famularo’s mantra is blindingly simple and readily accessible.

“If you put your mind into your bliss and you live in that reality, then anyone that steps into the circle of your bliss gets it,” he said. “There’s no fear. There’s no ego. You’re just pushing your abilities as far as you can with the tools and the gifts that you have. You have to allow it to happen. You have to believe.”

The Long Island Drum Tree
Looking up into the branches of the mammoth Long Island drum tree, everyone and everything can be heard from the intricate math rock of Michael Portnoy (Dream Theatre/Long Beach) to the psychedelic polyrhythmia of Mickey Hart (Grateful Dead/Lawrence) to the early hard rock thunderfunk of Carmine Appice (Vanilla Fudge/Brooklyn) to the original sweat and swing of jazz giant Roy Haynes (Miles Davis, John Coltrane/Baldwin). To the casual listener, he might not be the best known, but perched in the middle of it all is Famularo—Port Jefferson’s high priest of the paradiddle.