Even if you’re a dedicated guitarist, you might not know that the world’s second-largest guitar string manufacturer is located on Long Island. Beneath what looks like an office building in Farmingdale is a factory where about 800 workers produce 700,000 strings daily.

D’Addario, maker of strings for electric, classical and acoustic guitars, has called Long Island home since Charles D’Addario emigrated to the US in 1905 from Salle, Italy, where people were either farmers or string makers. Over the course of three generations, what started as a small string production company in the garage of an Astoria home has grown into a multinational operation that sells strings in 120 countries.

“I can remember going to my grandparents’ house and seeing the strings in the basement,” said Jim D’Addario, the company’s CEO. 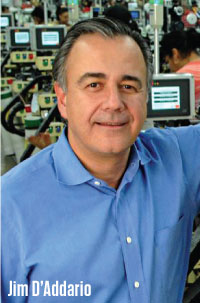 If ever there was a Long Island success story, it is the D’Addario’s. In 1994, the company moved into their current building in Farmingdale with almost 340 employees. Ten years later they’ve grown to about 1,000 employees worldwide, mostly located on Long Island. Many of them, like the D’Addarios, have been with the company for generations.

“The fourth generation is actively involved,” said D’Addario, who recently decided to move their carbon steel mill to the area. “We want to keep the company private and family run.”

And apparently, innovating. There’s a piece of cable wire from the Brooklyn Bridge that sits on the desk in his office. A friend gave it to him and it inspired the new NYXL string. They’re made on-site from high-carbon steel alloys with a revamped wire drawing process. It starts on a machine that looks like an oversized sewing machine loaded with wire, reducing the diameter of the line to the right thickness—sometimes as thin as a 1/10,000th of an inch. Then each string takes a dip in a steaming tub before receiving a molten tin coating, which helps stave off corrosion. The new process is meant to ensure the strings bend farther and stay in tune longer.

On the factory floor, Jim, who plays guitar, can often be seen out of his suit, wearing jeans and fiddling with the machines. There’s a loud wheezing noise that fills the open-layout of the factory—workers shout to be heard. Employees use machines to complete the majority of the string manufacturing process, except shipment prep. That task is done by hand with groups of workers sitting in a row taking strings off the machine, rolling them up and placing them into bags. They’ll end up in the hands of musicians from the inexperienced child picking up a guitar for the first time to established artists like Dave Matthews, Keith Urban and Sheryl Crow.