Richie Moloney tightened his legs around Slieveanorra and the 12-year-old chestnut Irish sport horse left the ground with the grace usually reserved for ballet dancers. Show jumping requires an athletic mount and a bond between man and beast closer than most marriages. In front of a grandstand full of spectators, both rider and horse glided over the obstacle, a well-manicured pair of hedges anchored by striped poles blocking the path. They touched down with a thud and continued to blaze through the Hampton Classic competition course.

Let there be no doubt, in show jumping circles the Hampton Classic is the ultimate prize. Moloney was the breakout star of last year’s equestrian show, winning its Longines Cup and the $40,000 purse. He also finished a close second to the repeat champion in Florida’s $250,000 FTI Consulting Grand Prix 5 months earlier.

Moloney gave his gelding carrots as a reward and his fair share of the credit. “He’s a good jumper when he’s in the ring,” the fast-rising rider said. “He’s quite a fast horse when he gets into a jump-off. Sometimes you feel like you’re flying.”

Yet Moloney, 32, would prefer the hypnotic chirr of the stable, sequestered with his charges, over the celebrity glow that comes with the last rousing annual event of the East End’s summer season. Born in Ireland to a horse racing family, he was groomed to be a show jumper, but his is a chase for perfection, not fame. Splitting his time between Riverhead and Wellington, Florida, Moloney is a promising rider and trainer for Equanimity. He competes in 30 equestrian events around the world for his sponsor, oversees 16 horses, mostly jumpers, including Slieveanorra. 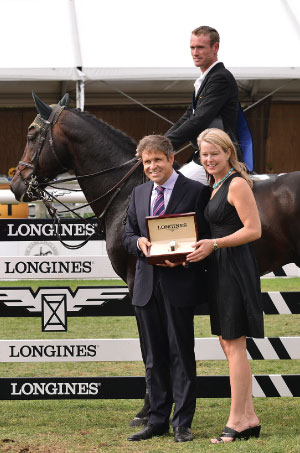 Unlike the slight jockeys circling the tracks at Belmont and Aqueduct, the 6-foot, 160-pound Moloney cuts a bigger figure and nurtures a relationship with his horses that may last years. “He’s very compassionate as a rider,” said Fiach Byrne, Equanimity’s barn manager and Moloney’s childhood friend. “He loves his horses. He likes to spend a lot of time with them. He’s a perfectionist, I think. Everything has to be right for Richie.”

Moloney’s family ran an equestrian center in Kilkenny, Ireland. He began competing at eight, the youngest of five hard-riding siblings before coming to the US to break into the jetset sport. When the rider he worked for recommended him to Equanimity’s owners, the wealthy Mercer family, he got his break. Three years later the modest Irishman is a force on the showjumping circuit, perhaps the most blueblood pastime this side of polo. “I’m very lucky to have the job I have. I started riding young, didn’t really know anything else. It was the only thing I ever wanted to do.”

It’s been quite a ride, both literally and lucratively. Moloney’s second place at the FTI Consulting Finale Grand Prix earned $100,000 in prize money. In the process he bested Jessica Springsteen, the Boss’ 22-year-old daughter. Now his sights are set on the premier event of that world, staged in his own backyard, where he’s placed as high as second in four years of competing. In addition to prize money, Moloney won two Longines timepieces in Bridgehampton a year ago. The Longines Rider Challenge was a new addition in 2013, the latest evolution for an event that attempts to rival tennis’ US Open in Flushing Meadows for attention and relevance.

The Hampton Classic brings red carpet pageantry to the East End for eight days beginning Aug 24. Sure, there’s elite equestrian talent, but the sideshow is just as impressive: Top-shelf brands hawking everything from handbags to Land Rovers set up shop shoulder-to-shoulder alongside an endless buffet of food options on the 60-acre Bridgehampton property. “It’s a very unique atmosphere,” Byrne said. “Every top rider in America is there. The grandstands are full. There’s a buzz all week around the show.”

The Hampton Classic has expanded through the decades, tracing its roots to the early 1900s when Southampton hosted show jumping events. The Southampton Riding and Hunt Club debuted in the 1920s, giving the sport a venue and voice. Equestrian showcases boomed and waned from one generation to the next until the Classic was born in 1977. Today the purses are bigger, paparazzi roam in packs and even grilled cheese sandwiches get the gourmet treatment.

There aren’t many places where deep-fried Oreos command respect among lobster roll elitists and American royalty test-driving the latest Jaguar or moms intent on getting their kids a pony ride. The Hampton Classic melds the sophisticated world of championship equestrian show jumping with an atmosphere that’s equal parts family carnival and A-list extravaganza.

“The shopping is amazing and some people come just to shop,” said Marty Bauman, who has represented the Hampton Classic for 23 years. “You can buy anything from a t-shirt to a Land Rover or a yacht. And it’s probably one of the few places where you would buy a Land Rover on a whim.”

Actually, you could buy a yacht, jet or supercar at the Classic. There will be more than 70 vendors, ranging from jewelry, artwork and apparel to toys and equestrian products like custom boots and saddles. Food trucks, caterers and local restaurateurs add spice. Nearly 50,000 people attended in 2013. It is uniquely Hamptons—like Alec Baldwin at an East Hampton Library board meeting or Katie Holmes sunning on the beach—and it has long been the final hoorah of summer on Long Island.

Our tagline is: The perfect end to the perfect summer,” said Shanette Barth Cohen, who competed in the Classic as a teenager and now serves as the event’s executive director. “I hear from people all the time when they see our tents go up [at the beginning of August] that they’re excited for the horse show coming but it always means the end of the summer is coming.”

That probably accounts for the swarm of celebs who invariably turn up. Billy Joel, Jerry Seinfeld, Matt Lauer, Martha Stewart, Mary-Kate Olson and Sofia Vergara were spotted last year while Michael Bloomberg watched daughter Georgina compete—and place third—in the Grand Prix. Thoroughbred racing may be called the sport of kings, but show jumping today is even more aristocratic. There’s little chance of a money-making operation since purses are scarcer than in the wager-fueled world of horse racing. And fielding a successful team is first and foremost about the love of the sport.

“It’s certainly one of the most prestigious and important show jumping events in North America, if not the world,” Cohen said. “When we look at sponsorships and those things, our biggest competition is the US Open because it’s right on top of our event. We’re competing for some of those same sponsors.” 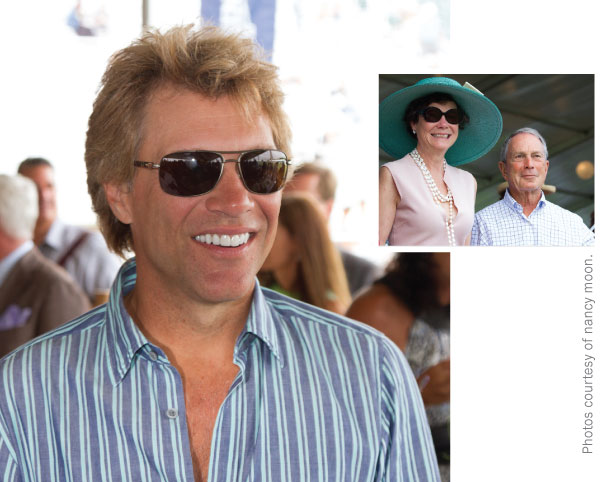 Cohen runs a multilayered operation, a non-profit devoted to helping other Long Island organizations. Southampton Hospital received a $100,000 contribution a year ago and several service-based organizations are given space at the Classic. Yet at its core, the Classic is a still a horse show. And the stars are the animals.

“It’s a true community event,” Cohen said. “It appeals to the top riders in the world who compete, but it’s also a family event. Leadline competitors—who are as young as two or three years old—get led around the ring by an adult. And there are a lot of people who come to the show who maybe have never sat on a horse.”

One local is simply seeking another epic ride. “Richie was always—even when we were kids in Ireland—going to be a fantastic rider,” Byrne said. “All he needed was an opportunity. There was no doubt in my mind Richie was going to rise to the top. I’m just happy I get to be a part of it.”

Fast Facts
Admission is $10 per person or $20 per car load. Anyone who shows up in a Land Rover or Jaguar gets in free. Southampton Hospital employees attend free. Any person/car who brings three or more non-perishable food items on Aug 26-27 enter free.

The American Society for the Prevention of Cruelty to Animals will bring animals for adoption on Aug 25 from area cat and dog shelters along with horse rescues.

The Long Island Horse Show series for riders with disabilities will hold its championship on Aug 25.