Most fitness lovers are not strangers to the barre craze, but Elements Fitness Studio takes the movement in a new direction—by restricting it. Back in May, the studio opened in East Hampton, the first barre venue in that area. As their tagline says, it is now possible to go straight from the barre to the beach.

“There is an electric energy here in East Hampton—both from my clients and the growing fitness community,” said Elements’ founder Andrea Fornarola Hunsberger. “In Manhattan it is about survival. In East Hampton it is about thriving. It is also a popular place for my NYC clients to stay in the summer [Elements’ original location is in Tribeca], so I wanted my first brick-and-mortar studio to be accessible to old and new Elements students.”

Fornarola Hunsberger formed Elements in January 2010 as a consulting and training company after being hired to design a custom workout for a fitness studio in upstate New York. She is a trained dancer who started taking classes at five-years old while growing up in Rochester where she learned ballet, modern, jazz, tap and ballroom. After developing a roster of private clients she launched a series of studio classes in Tribeca, renting space at Downtown Dance Factory. The signature classes at Elements (barre fitness, dance cardio and cycle barre fusion coming in July) are based on a customized formula that incorporates her background in dance and fitness.

Unlike many other barre classes, Elements routines do not use weights. It’s exclusively resistance bands, which are “an amazing tool because they target the biceps, triceps, deltoids, trapezius and rhomboids in a more efficient and safer way than weights,” Fornarola Hunsberger said. “The resistance of the band can be easily adjusted to be more difficult or easier, unlike weights that you need to switch out. The bands are used throughout class, as they increase the intensity of the exercises, add stability and also help with increased range of motion in stretching.”

Before starting the Elements Barre Fitness class, participants are given a resistance band and towel. As class begins the house music kicks in and the lights are turned up. Small red balls, resembling those used for kickball, are neatly lined up on the barre in the 1,200 square-foot studio. Fornarola Hunsberger helped dissipate any fears beginners may have had by explaining the positions and what body part each movement targets. She is friendly and energetic, offering a welcoming vibe that quickly puts the class of about 12 to 15 women at ease, even for those who have never gone near a ballet barre in their lives. “Barre fitness is for everyone,” she said. “There are no restrictions. Young, old, dancers and non-dancers alike…anyone can do the workout. It can even be useful for those who are recuperating from an injury, as the exercise is low impact yet also increases flexibility.”

The class begins with a warm-up on the floor, starting with lower-back stretches, leg lifts, a series of push-ups and planks, followed by tricep dips. Fornarola Hunsberger keeps the pace light with her friendly, encouraging tone, offering words of encouragement without being overbearing. After 10 minutes, the floor work is done and the class heads to the barre section of the studio where a series of arm and leg stretches are introduced. This is where the real work begins.

At first, this seems simple, like pliés while holding onto the barre, but after 5 to 10 minutes of several sets, muscles start to shake and burn. Fornarola Hunsberger reassures that “shaking means changing” and “when you feel the muscle start to heat up and shake, that is when you are making them change shape.” In other words, it hurts so good. 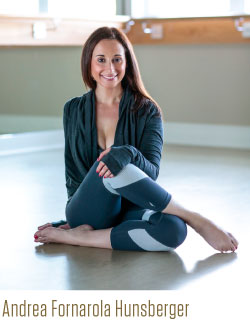 For the next portion, the resistance bands are wrapped around the barre, which is at a comfortable 38 inches off the floor. Participants are led through a series of hamstring stretches; the bands are used for assistance. In other typical barre classes, an instructor might incorporate light weights at this time, with participants moving to the center of the room, weights in hand, for a series of bicep curls and hammer grabs. Here, only the resistance bands are used for strength training, creating a smaller range of motion and isolating the targeted muscles, which is what the small red ball is used for.

After that Fornarola Hunsberger called for a series of thigh work reps. Participants stand a few inches away from the barre, with one hand on top of the barre while the other hand is directly in front of them. The ball is positioned between the legs, a few inches above the knees, as participants do a series of 10 slow squeezes. Then the intensity is raised to 20 fast reps in the same position, ending with the hips being tucked in as the ball is squeezed again for a short series of reps. After several reps this becomes extremely fatiguing, but the leg shaking starts to feel like a sign of victory.

Just in time a large, full body stretch is introduced into the mix, with participants guided to alternate arm and leg stretches. This big stretch is part of the recovery period, giving the muscles time to rest. The final set of exercises is done with the bands placed up and over the barre. Participants lay flat on the mats, heads directly under the barre and its custom, artistic brackets. Fornarola Hunsberger leads the group in a large exhale, meant to activate the transverse abdominal wall. The bands are then used to pull the arms while the legs work the tabletop position; legs alternated to target the oblique muscles.

As the class comes to an end the music becomes gentler, the lights dim; the focus shifts to Fornarola Hunsberger’s soothing voice as she slowly winds the hour-long class down. When it’s over, everyone is red faced but happy; the feeling of accomplishment quickly winning out over any pain. “Way to work!” Fornarola Hunsberger said in her friendly and encouraging tone. “You made it to the end of class. You might hate me today, but you will thank me tomorrow.”

Located in the heart of town on Newtown Lane, the studio is across the street from another luxury fitness brand, Soul Cycle. Walking into the new studio is a pleasant experience as sunlight streams in through the large, street-facing windows, bouncing off the freshly painted walls in soothing blue, grape and grey. Leaving after the class, it was easy to forget that this is a place where a certain amount of pain takes place every day.

Those resistance bands will get a lot of use this summer when Elements launches one of their biggest, boldest ventures to date—the cycle barre fusion class. Demos will begin in June before they officially launch in July. The class combines barre with fitness bands and indoor cycling. Offered in 60- and 90-minute sessions to small groups, the barre-cycling hybrid features intense cardio, toning and sculpting techniques, as well as core stabilization and balance, both on and off the RealRyder bicycles. Riders hop off the bike to perform push-ups, forearm planks and resistance band work, then get back on to peddle up hills and burst through sprints.