In an earlier era Captain Kidd and other merchants bartered for bundles of contraband leaves with Long Island’s Native Americans to avoid England’s tobacco tax. Later, the region’s first farmers grew tobacco for their own consumption. It’s no longer necessary to take the pains Kidd did to enjoy a good smoke. Today the experience can be very graciously had at several Long Island shops. 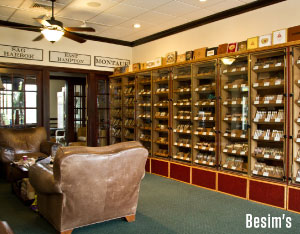 One would be hard pressed to find a more knowledgeable and friendly tobacconist than Besim Cukaj, who regularly helps novices as well as aficionados navigate his selections from around the world. Besim’s features individual lockers, loose tobacco, specialty pipes and accessories such as humidors and cutters.

“We help people new to cigars all the time. The more popular cigars are those that can be smoked in twenty-five to thirty minutes, like a robusto,” he said. While acknowledging that cigar smoking is “very personal,” Besim noted most prefer a mild to medium selection. “You don’t need to be overwhelmed,” said Besim. “The only rule is to find what you like and smoke it.” 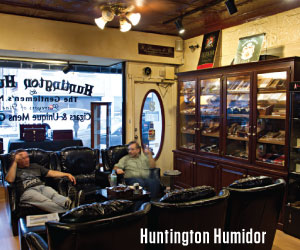 Huntington Humidor
The Vibe: A haven for the literary smoker

The quaint old-English library atmosphere is a unique find: Modern touches like a poker table and big-screen TV are happy complements to curling up with William Blake over good smokes. It displays a “cigar store cowboy” instead of the traditional Native American and the team truly takes pains to learn your name, said staffer Charlie Dipietro.

In addition to having an in-depth inventory covering all price points, Huntington Humidor has a lively events calendar. The lobby contains oldstyle cabinet humidors and glass cases displaying smokers’ accessories; there’s no walk-in humidor. While the cigar lineup is broad, cigarettes are limited to the Nat Sherman line, especially the New York Cuts (some imports are on hand). So-called “roller nights” as well as “launch nights” when new cigars are presented, offer the novice a chance to learn and experience social smoking. “We’re a friendly bunch here,” said Dipietro. “We welcome newcomers and veteran smokers.”

The Little Cigar Factory
The Vibe: A smoke amid the vines

Attached to Vineyard 48, this cigar- smoking sanctuary offers hand-rolled cigars made at its parent factory of the same name in Massapequa. They use imported and domestic tobacco, some of which is grown to their request. While inventory is limited, the shop has a cozy, tropical motif. In addition to cigars, smokers can enjoy the vistas, the music (on weekends) and the wine made next door.
18910 Rte 48, Cutchogue vineyard48wine.com, (631) 734-5200

Matador Cigars may be the most complete cigar lounge on Long Island. It features a nearly endless inventory, 2 smoking lounges, 60 lockers, 6 TVs, a billiard table, leather seating and a walk- in humidor.

“We’ve got something for everyone and are happy to explain the various nuances behind each cigar,” said Matador’s friendly proprietor Boris Grossman who added that about 10 percent of his customer base is female. Matador can also be counted on to regularly feature the latest cigars from high-end manufacturers such as Ashton and Tatuaje. “People shouldn’t be intimidated when cigar shopping. It’s a great experience and tradition.” 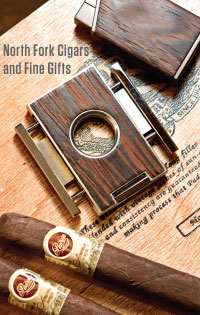 This recently opened smoke shack is one of the most eastern points to buy a cigar. It features over 100 types of cigars from $2 to over $50 and regularly adds to its inventory. Stored in temperature- and humidity-controlled, Spanish cedar-lined humidors, the small but elegant shop also has a full line of accessories such as lighters, cutters, humidors, travel cases and ashtrays. Co-proprietors Todd and Rachel Johnson are planning cigar-maker talks, rolling demonstrations and book signings.

“Cigar smoking is quite popular among young professionals,” noted Rachel. “When looking for a cigar gift, it’s important to know what kind of smoker you’re buying for. If a customer isn’t sure, we have a few go-to brands. Most look for a good thirty- minute cigar. When buying for, say, a golfer, consider a box-pressed cigar. These last longer than a traditionally rolled cigar.”
28100 Main Rd, Cutchogue (631) 734-5130

Entering Polanco Cigars is like going into a small, ethnic restaurant with a limited menu but where each item is first rate. Polanco may be low on atmosphere—just two couches, a television set and glass display cases—but fresh tobacco is delivered almost daily and each cigar is rolled on site. President, tobacco buyer and chief roller Julio Polanco personally rolls 100-200 cigars per day. Most feature a long, Dominican filler and classic Connecticut shade wrapper, such as in his signature corona. The inventory is predominantly limited to what’s produced on site, which in the case of Polanco Cigars, leaves one with excellent choices. The reasonably priced, pyramid-tipped cigars are a great value for strolling along the local waterfront where one can often peacefully enjoy a cigar. 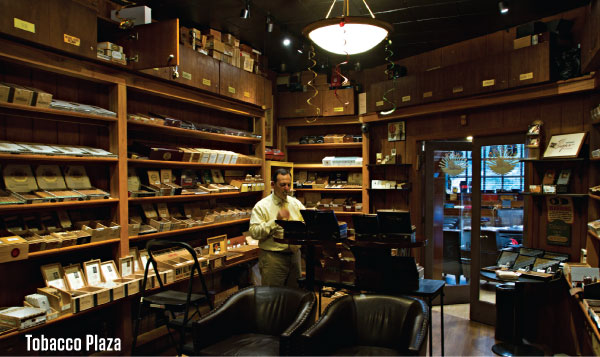 Co-proprietor Mike Holman, who is fond of hosting “cigar launches,” said customers are welcoming new offerings such as Kentucky fire-cured cigars. Cultured over hickory, maple and oak woods and rolled in Nicaragua with a Mexican-grown wrapper and some American-grown filler, it is of medium strength and delivers a “smoky, barbeque taste.”

What to Buy/How to Buy
Giftshopping? Try to determine when and where the lucky smoker enjoys his cigars. If he enjoys a smoke in a relatively isolated spot like the golf course, on a boat or during a long walk, a medium- to long cigar like a corona may fit. If he smokes during lunch hour or on the drive home, think robustos, which are less than six inches and can be consumed in 25-35 minutes. For a special-occasion smoker consider a “limited cigar,” such as an Opus X or Zino Platinum. Ranging in price from $15-25, limited cigars are made in strict quantities and are typically something smokers appreciate but do not regularly buy for themselves. Brands such as Ashton, Arturo Fuente, CAO, Camacho, Davidoff, Cusano and Macanudo reliably make them. Most cigar shops also sell other merchandise that can make for good gifts like cutters, humidors, cases, lighters, pipes, pipe tobacco and high-end cigarettes.

When buying cigars online it’s impossible to get a feel for their condition and they can be damaged in shipping. While a lot goes into what’s often perceived as a simple pleasure, selecting a cigar needn’t be confusing, intimidating or expensive. Most Long Island tobacconists are friendly and willing to help a curious novice or seasoned smoker with fine selections.

Cigar Selection 101
Like all matters of taste, cigar smoking is highly subjective. Tobacconists can generally be relied upon for good suggestions. Below are some basic terms that should help.

Binder: The better binders come from Cuba, Connecticut, Mexico and Ecuador. Java and Sumatra binders are also prized for their durability and flexibility.

Fillers: The best cigar filler or interior comes from Honduras, Dominican Republic and Nicaragua. Long-filler cigars demand a premium over medium-and short-filled versions. Long-filler cigars also burn more smoothly and must be puffed to keep from going out. Short-filler cigars burn quickly as the tobacco length resembles that used in cigarettes and is generally considered of lesser quality.

Size: Cigars are measured by length and width. Length is in inches. Width is in ring gauges. One ring is 1/64th of an inch. A typical robusto is a 50-ring gauge and 5 inches long. A “gran robusto” will be longer or wider. A toro is 6 inches long and usually a 50-ring gauge. Churchills are narrower at 48-ring gauge but stretch to 7 or 7 1/2 inches in length. Other popular sizes include corona (the larger version of robusto), panetela (a long, thin cigar) and lonsdale (longer than corona but shorter than panetela). The “torpedo” is slightly irregular in composition, about six inches long, pointed at one end and a bit fatter in its center. NB: One manufacturer’s petit corona may overlap with another’s robusto.

Tasting Notes: Terms used to describe cigars are difficult to define because they can mean different things to different people. A light- colored cigar typically means it is mild. But “mild” to one smoker may be “weak” to another. While some seek a “robust” or “full-bodied” cigar, others may find such traits “overpowering.”

Wrapper Leaf: The wrapper or outer covering is made from tobacco leaf that’s often different from the interior. It provides most of the flavor. Connecticut shade is traditionally one of the best wrapper leafs. Wrapper color ranges from very light tan (claro) to an almost black-brown (maduro), with many variations. Wrapper color should be rich, even and smooth with a slight shine from its natural oils. A box of cigars should be consistent in appearance and free of leaf veins, cracks or tears.