It’s sunrise on a mid-summer morning and a few hundred people are gathered along the shore of the Great South Bay near the Fire Island lighthouse. From here, most Long Islanders would return to the mainland by simply driving over the Robert Moses Causeway, or perhaps catching a ride on the Fire Island ferries or a water taxi. But not these people. The ones standing here are a select group of athletes who’ll return to the mainland by a method unimaginable to most: They’ll swim.

One hundred swimmers in brightly colored swim caps, an equal number of kayakers to accompany them and a gaggle of spectators on both sides of the bay wait in nervous anticipation. Then the serenity is broken by the intensity of the start. “At first it’s such a crazy scene,” said Isabella Danzi, a 17-year-old senior at Bay Shore High School who was last year’s youngest finisher. “The kayakers go out, you’re standing on the shore, someone says ‘go,’ and everyone is swimming on top of each other, trying to find their kayakers. But somehow people sort it out.”

One mile slips by, then another. The swimmers aren’t even halfway across the bay when they’ve already gone farther than the swim leg of an Ironman triathlon. “When your eyes come out of the water, there are parts of the bay where you see nothing,” said Brightwaters’ Bob Fischer. That’s when it’s time to dig deep and stave off panic. Swimmers often check in with their nearby kayak escorts, get their navigational bearings, maybe even tread water for a moment to swig some fresh water or have a light bite to eat. Then it’s time to resume the journey. 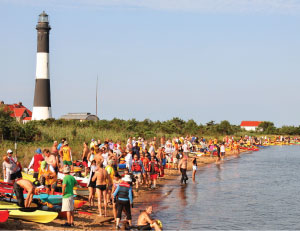 The event began in 1927 after the first female swam across the English Channel, completed by New Yorker Gertrude Ederle the year before. Though it has gone on some hiatuses over the nearly nine decades since, it has always returned, most recently in 1999, when Fire Island Ferries captain Rory Allen resurrected the swim, recruiting local lifeguards to make the trek.

Maggie Fischer, a 17-year-old senior at St. Anthony’s High School, was going to be part of it. Her family’s from the Village of Brightwaters, where the swim finishes and she was a lifeguard on Fire Island where her family’s ties go back four generations. But just days before the swim, she tragically died in a car accident.

About a dozen swimmers completed the feat in her memory and the modern day Maggie Fischer Memorial Great South Bay Cross Bay Swim was born. It’s a long name for an even longer swim that has connected the athletes, families and communities of the Great South Bay for the better part of a century.

The swim—with Maggie’s father, Bob, as race director—is now capped at 100 participants. Hauppauge native and New York City fireman Rich Wilde is one of them. He’s been a summer lifeguard at Saltaire for 25 years and was Maggie’s boss when she worked there in 1999. “The people who were going to swim it, we all knew each other. Plus it’s so close to home and I know the Fischers so well,” Wilde said, thinking back to Allen’s initial invite. Now, “it’s hard not to do the swim.”

Some people train years for the event, swimming 4,000 to 6,000-plus yards per day; come race day they’ll attempt all 9,000 yards. But while the distance is one thing, other factors really define the challenge. For instance, there’s the chop—fighting to breathe, each stroke an increasingly exhausting struggle to clear your arm over the successive, relentless waves, until your shoulders burn and your triceps turn to Jell-O. “We’ve had years with huge amounts of seaweed. Last year we had a big jellyfish problem,” said Fischer.

Danzi, the high school student from Bay Shore, knows something about that. She got a bad jellyfish sting around her neck within the first mile of the swim. “I just had to suffer through it the whole time,” she said. It’s why many swimmers opt for full-body wetsuits as a form of protection even though the water temperature usually hovers around 80 degrees on the day of the swim.

Still, the greatest challenge proves not to be the seaweed or the jellyfish, but actually navigating and fighting through the waves of the open bay. “If you can feel that slight little breeze, it’s going to multiply by ten by the time you get to the middle of the bay,” said Wilde. “It’s wide open—no landmarks, nothing blocking the wind. That’s when it gets the most challenging. That middle third is where the race really starts and is what separates the people who are ready for the swim from those just trying to eek their way across.” 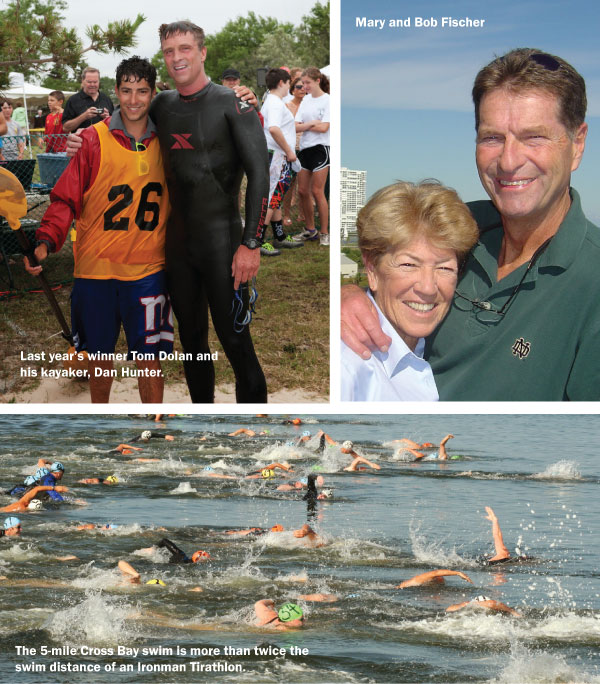 Though the Cross Bay Swim is billed first and foremost as a memorial—swimmers fundraise to benefit Long Island’s Hospice Care Network’s children and family bereavement program, as well as a scholarship at St. Anthony’s High School in Maggie’s memory—everyone knows there’s a race within the larger event. “The Fischers say it’s not a race, just a swim,” said Wilde. “But if there’s a start and a finish line, people are going to race no matter what.”

Last year, the winner was Tom Dolan, a 46-year-old New York City fire chief from Breezy Point who once swam the 28.5 miles around Manhattan. He’s obviously no slouch, but the Cross Bay Swim has challenged even him. One year, just a quarter mile from the finish, “I completely blew up,” he said. “I was doing the double-arm backstroke just trying not to drown.” He determined to return and “swim it properly the whole way.”

He’s won it three times and plans to defend his title again this year. “Let’s be honest. You’re not gonna show up and try to be slow,” he said with a laugh. But then his voice calmed, adding with sincerity, “But this is a memorial swim to recognize Maggie’s life. That’s why I keep coming back; that’s more important. My brother Kenny died in a car accident when he was 21. I know firsthand how important it is to have people participate in events like this,” Dolan said, referring to the 5k memorial run his family holds in Brooklyn each year.

“Everybody who swims this has an inspirational story,” said Fischer. Isabella Danzi does, too. She was winning Suffolk County swim championships by the 5th grade but in high school she walked away from competitive swimming to focus on music. The Cross Bay Swim is her last connection to the sport she loves and it’s drawing her back for another go. “I would really like to have this be something that I always do. It’s something I never want to miss. It’d be cool to someday be someone doing it for my 20th year in a row.” In that way, Danzi is continuing what Maggie never had the chance to start.

The swim’s namesake lives on in the 100 swimmers who’ll wade into the Great South Bay on Aug 1, in the 100 kayakers who’ll accompany them, the dozens of boats that will line the course, the hundreds of volunteers that will make it happen and the hundreds more spectators who’ll be waiting at the finish in Brightwaters. They’re all there to be part of a legendary swim greater than themselves and they’re all swimming for Maggie.