It was somewhere in the mid-1990s and Andrew Lack, then head of NBC News, lay sprawled in the dirt, his face a Kabuki mask of pain and confusion. His shoulder was contorted at an unnatural angle while nearby on first base stood Gerry Cooney, the former heavyweight boxer whose heads-up hustle (and bone crushing collision) had won him an infield single in the late innings of the annual East Hampton Artists & Writers Softball Game. 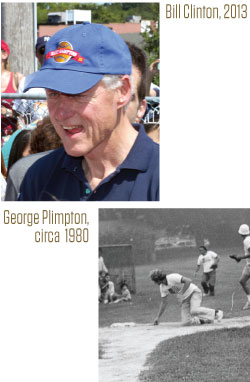 Among the spectators who came to see celebrities like Paul Simon, Christopher Reeves, Christie Brinkley and Regis Philbin, the initial response was a kind of shocked silence. As the television executive was being carted off the field and taken to Southampton Hospital, I heard someone nearby break the startled hush, “What the hell was that? I thought this was a friendly game.”

The Artists & Writers game may be made up of friends, but in the many years since I started watching as a child I’ve seen the evolution of a competition that is, in the deluded minds of the players themselves, as intense and legitimate as the Yankees/Red Sox or Ali/Frazier. Motivated by the same explosively flammable combination of competitive drive and repetitive familiarity (absent, of course, any discernable athletic prowess), the Artists & Writers game illustrates with immediate clarity that victory is most satisfying when it comes at the expense of one’s familiars.

I once heard the noted author and media critic Ken Auletta intone, he whose graceful fielding at first base is so often accented by quotes from Louisa May Alcott, “Rivalry adds so much to the charm of one’s conquests.”

So when did this blood feud actually begin? Some maintain it started in the 1960s when the writers began showing up more regularly and insisted on playing by legitimate rules. Up to that point the games were distinctly pick-up affairs where rules and regulations were less important than beers and bloody Marys and where the final score was often unknown.

By the early 1970s however, a premium was placed on actually knowing the intricacies of the game, subtleties often lost on artists like Willem de Kooning, Esteban Vicente, or my father Jimmy Ernst—European émigrés who loved American baseball but who had been raised playing soccer.

As for the writers, each year always seemed to boast a dramatically better lineup than the year before with luminaries like George Plimpton elegantly patrolling center field like a WASP Joe DiMaggio, playwright Neil Simon slinging wisecracks and cracking doubles over Larry Rivers’ head or James Lipton playing a scrappy second base like a cross between Dodger great Eddie Stanky and an angry badger.

Throughout my youth, the artists never provided a serious contest against this kind of lineup—no true rivalry really developed. Then, sometime around 1972, Leif Hope expanded his role from artist manager to PT Barnum-like promoter on behalf of the various worthy causes the game benefits. 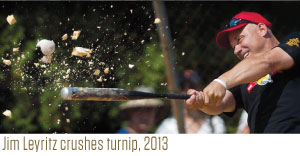 The idea to raise money for charity began in 1968 when the game was used to gather campaign funds for Eugene McCarthy (the only poet/senator ever to run for president). And then a few years later to help defend artists Bob Gwathmey and Bill Durham in a landmark civil rights case. (They were arrested for flying a bath towel that was painted to look like the American flag with a peace sign where the stars would be.) Having realized the game could be an effective fundraising vehicle, even for whimsical causes, Hope began to consider expanding on its altruistic possibilities even as he also recognized that it would be necessary to promote the game in a whole new way.

As a result, his first promotion was fielding an all-girl team of artists and hiring a professional female softball player to fire 90mph inside fastballs at the writers for the first inning.

For some inexplicable reason, many of the scribes found this distinctly unfunny and were even more chagrined when she was brought back into the game later to shut them out at the most crucial moment. The artists ended up winning a game for the first time in modern memory and, among the writers, the manager of the artists earned the loveable nickname “that son of a bitch Leif Hope.”

Over the years other professional athletes would follow, among them Jim Leyritz, Dale Berra, Wesley Walker, Pelé and Marty Lyons—whose mammoth home run into the tennis courts at Herrick Park in East Hampton is still spoken of in hushed tones. It was, however, the actual accumulation of talent on the artists’ team in the early 1990s that truly leveled the playing field and led to more competitive contests. Admittedly, this was achieved by expanding the definition of “artist” to include just about any profession that was even remotely creative, but then again, the term “writer” was also becoming significantly more elastic as well. 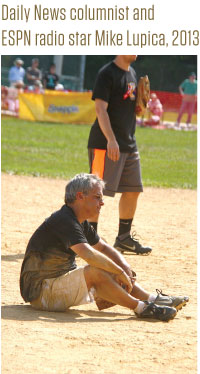 The artists added a landscape architect only to find their move parried by the writers’ addition of an ad exec who wrote copy; a lawyer who had an artist client was added, a move offset by the writers’ acquisition of a real estate agent who once wrote a short story…

One wonders then, what new manifestation of gamesmanship will be required for the two teams to remain competitive in the coming years, especially as the core players for each team inevitably must bow to the inroads of time. Already within the past few years, a number of incidents involving the use of performance enhancing substances have been documented—including an overdose of Red Bull (leading the overly energized and wide-eyed runner to forget that one can’t go from first to third by bisecting the diamond thereby skipping second base entirely) and steroid use (actually a cortisone injection for a bad shoulder but hey, it’s a steroid). Further, at least one storied member of the artist team has for years been a known aspirin and milk junkie.

It should be pointed out however, that even absent these recent evolutionary trends towards more competent contests, the historical enmity between artists and writers will always guarantee a measure of personal animosity regardless of talent on either side. This has been true from the moment in 1456 when it was rumored that Renaissance sculptor Donatello taped a “kick me” sign to the back of author Leon Battista Alberti’s cloak. It was evident when Cooney flattened NBC’s Lack and it’ll be just as apparent this summer when sportswriter Mike Lupica has his annual collision at home plate with sculptor Randall Rosenthal.