Nobody thought it would last. The Touareg, upon launch in 2002, seemed too similar to its dozens of rivals, many of whom were better-looking and less expensive. But Volkswagen had (and still has) legions of fans who’ve remained loyal through decades and were eager to spend dollars on their favorite team rather than bailing to another automaker when they were finally ready to take the Sport Utility Vehicle plunge. The Touareg thus found its market before it was even introduced, and it’s still here 12 years later while rivals like Mercedes’ R-Class, for example, bit the dust.

The 2015 Touareg’s got larger headlamps, four hood lines instead of two, handsomer, more piercing fog lights and both front and rear are widened for a more aggressive stance. Google “Touareg 2012” and put it up side by side with the refreshed model and you’ll see the change is the equivalent of taking your selfie and “popping” it with software. More is more in this case – it looks more elegant, more modern, more in line with its price tag than in previous years.

The Touareg’s strength is in its well-appointed interior, road manners, comfort and smooth-as-a-baby’s-tuchus ride. Sweet chrome accents surround your control panel controls, and switches have been replaced with better-looking, better quality materials. You’ve got a choice in leathers and wood trim with names like “Bonanza Brown” and “St. Tropez” for the cow and “Sapelli Mahagoni” and “Engineered Ebony” for the trees.

Visually, despite the makeover, the Touareg neither attracts nor repels. Finding it in a parking lot may prove as much of a challenge as looking for the guy wearing the suit on Wall Street. Also, it’s hard to get behind buying a Hybrid of any kind that delivers a mere 24 miles to the gallon under the best of conditions, and you may find yourself wanting to yell at the accelerator in addition to stepping on it to get some decent blastoff at dead stops. But there is a reason the Touareg has survived and thrived, and it’s not because of its badge – it’s a well-made car worthy of a drive and perhaps a buy. 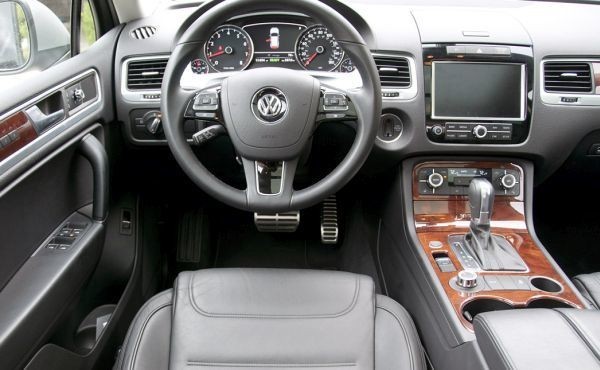