Seascapes are not new; painters have been trying to capture the elusive enormity of the sea for centuries. The way Devereaux makes them new is by pursuing the light and the movement of the sea instead. And she renders it with her swirling, churning, burling technique that has the same energy as the waves and the wind. It is violent and rapid; she’s working with acrylic, she has to move quickly to outpace the drying of the paint.

“Those things that are ominous are also beautiful… They’re destructive, yes, but there is a beauty in all of that… There’s an excitement you feel when there’s a storm.”

And though it’s simply about the power of nature, she’s acutely attentive to composition. Her horizon lines always adhere to the classical principle of thirds and the imagery is obviously realistic, despite resonating in a very impressionistic fashion. “There’s really no statement here, it’s really the emotional forces of nature.”

Each panel relies on its hidden gems. Nebulae and suns appear and disappear and reappear in the canvases depending on the light. And though they are seascapes, the horizon usually sits lower on the panel, making it more about the sky, which has everything to do with our feeling intimidated by that endless sea.

For Devereaux it’s mostly about refracting light. She’s using paint to create millions of little mirrors on the canvases that go from black to copper, depending on where the viewer stands.

“I’ve always been interested in the abstraction of light that’s created from nature.” That’s a big part of the excitement for Devereaux but not all of it. The sea represents freedom and “the type of awe” that few things can make us feel. When a storm is rolling in, all the chatter and the weight of the day is hushed. That first-person audience with nature is what she delivers. 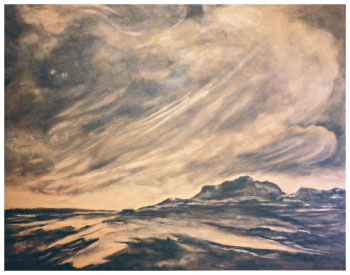