The art she creates is a world where “swimmers, crawlers and flyers all live together and it’s a dream.” That’s why she calls them dreamscapes. 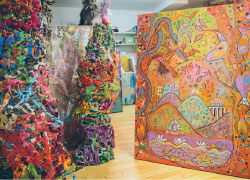 “A lot of it goes back to being childlike but not childish,” and that’s where Ginger Balizer-Hendler takes us as viewers. At first glace the work resonates as a celebration of femininity, but she’s not trying to make a statement. What’s she’s doing is using the concept of the female as a reference for Mother Earth to create testaments of peace and non-injury.

“It’s kind of primitive work, I’m not a representational artist, although I do have figures or lifelike things. But I’m not looking for anything to be real. I’m creating a fantasy world. And I think of myself not as a painter, but as a storyteller.”

In fact with her painting she’s working intuitively towards the goal of creating a world where creatures are safe, even if they are not actually there. In her windows series, it’s easy to imagine it’s the side of a multi-story building with rows of windows. In each pane there is a world, a character of some kind. Though an actual portrait is absent, the viewer’s imagination places one there.

Balizer-Hendler’s world is one of harmony with colors and animals and fairies; it’s a world of candy. It’s the free feeling of running through a field and chasing butterflies. It’s a cross section of theater and clothing and prayer. In some cases, it’s three dimensional, like in her totems. Other times, it’s two dimensional, like the flatness of a panel. In both cases she’s rendering a landscape of sorts. “A lot of it is starting to feel like theatrical sets, which goes back to my interest in theater,” she explained.

And other times, like with her hoodoos (fairy chimneys), it is a physical manifestation of her spiritual world. And she’s sharing the expansion of her inward journey outward by seeding these objects out into gallery spaces or downtown settings so the rest of us can participate in her emotion when we stumble upon one.

Ginger Balizer-Hendler’s installation Adventures of Gingerella and the Peaceful Planet Project will be on view at 213 East Main St, Riverhead, beginning Aug 8 as part of the JumpstART revitalization program. gingerlyart.com