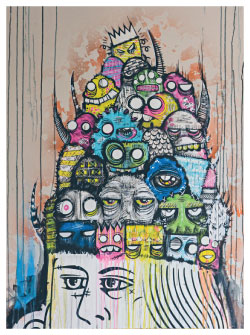 I put down graffiti for a couple years and when I came back looking for a new name, Phetus was the rebirth of me, so to speak.

I’ve been doing it for 20- something years and I’ve traveled the world. I’ve been with SEEN and Banksy and I have a passport full of stamps. I grew up in the 80s. I was into the whole hip-hop thing. Everyone jived together with the arts and the music. I just kept pushing forward and grew along with the culture.

Graffiti’s out in the street. And it’s free. It’s illegal, it’s risky and it’s everything you’re not supposed to be doing. But if you got your paint paid for you and you have allocated time to be on the premises, it’s not graffiti. That’s where the term “street art” came in. If someone purchased a canvas, they might vicariously be able to live through what’s going on in the street scene, like they have a little tangible piece of something they can’t really be a part of.

I went to the School of Visual Arts, but being in the city, would you rather paint a bowl of fruit or go run around and spray paint the alleys? The classroom was the city.

The high that I get out of it is when people take pictures in front of it, whether or not they tag me (in social media) or not. I like finding the pictures—a group of kids or somebody walking their dog or jumping in front of it. When I’m not there my impression is left on that block for whoever walks by and whatever emotion they get out of it. When I do these characters, anybody can identify.

After this whole thing dies out I’ll have to reinvent myself. I’ll probably come out with my government name and just paint.

I like the freedom of painting. What I paint is what I paint. If you like it, you like it. If you don’t, you don’t. And that’s kind of where I’m at.”

Recent works by Phetus will be shown at Paint Circus running at Poppington Art in NYC Aug 14-30. phetus.com