“I’m awed by really remembering that we are on a rock and we’re spinning around… it’s not sci-fi and it’s not astrology—I’m not looking for patterns in people’s behavior—but I am interested in the universe as the whole night sky. I don’t aspire to go to another planet, it’s just sort of magical.”

Until now, Sarah Jaffe Turnbull’s sculptures have been largely figurative, but this new direction is significant because it is literally constructive. And in this case they resonate because geometrics are the rendering of our need for order even though the shapes are disparate and assembled almost teeteringly.

She believes in the need for non-verbal expression and for spiritualism. “The more you do it, the more you open up to possibilities. This just started to happen. I started to think about shapes and combining them. And then they started to look architectural… I see them existing elsewhere, in a bigger version. They’re like a kind of building… I’m interested in planetary things, like could they be somewhere else?”

The works are about weight and architecture. They’re about relationships. They’re put together spontaneously, but light is an instrument and guiding principle. “It feels like an opening of my own kind of aesthetic. It’s really not representational, except in that kind of Oz way…the way that we invest things with power that sometimes is completely not there.” Someone once told Jaffe Turnbull the works are like elephants on stools at the circus and that’s true. There’s an awe in seeing something so masculine and powerful poised so precariously. To some extent, they’re reflective of her interest in Japanese aesthetics, which are minimalistic and clean, and of course the material and finish are part of it. It looks like brass or steel, but it is airy ceramic. 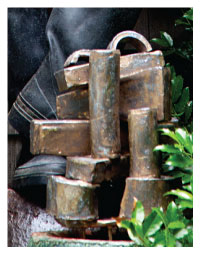 As for their relatable quality, they’re appealing because they’re like constructs we engage with daily, like buildings and temples, but also metaphorically. Our experiences stack up sloppily, interrupted by conundrums and surprises. Seeing it on a table in a way that can be handled gives the viewer the sense s/he can handle the world.

And then there’s the freedom of imagining they’re space stations to travel in intergalacticly and roam freely through.

Sarah Jaffe Turnbull will be included in the Long Island Biennial at The Heckscher Museum of Art, Huntington, Aug 16-Nov 30. sarahjaffeturnbull.com