Anyone who has survived a kitchen renovation can attest to what seems like a rapid-fire succession of problems. If it’s not the wrong cabinets that show up, it’s the plumber that doesn’t, or the mushrooming budget. While things didn’t get that trying for chef George Hirsch during the renovation of his Noyak kitchen, he did cut it close to a deadline. “It was finished two days before the first shoot,” Hirsch said, referring to the production of his new show George Hirsch Lifestyle.

After 20 years of traveling and filming the culinary world for public television, the Islip native decided to return to his Long Island roots and the fundamentals of cooking. While portions of the show are filmed on South Fork locations with artisanal purveyors, the cooking happens in his kitchen. Because the space pulls double duty as a studio and a home kitchen, the makeover had to balance aesthetic details and smart design that would fit any home.

When Hirsch cooked in restaurants it was all about efficiency of movement and that’s still the case here (lots of open shelves), but the kitchen also has inviting warmth. “It doesn’t matter where you set guests up when you entertain,” Hirsch said. “You could have a drinks station off to the side or a platter in the living room, they all gravitate into the kitchen. 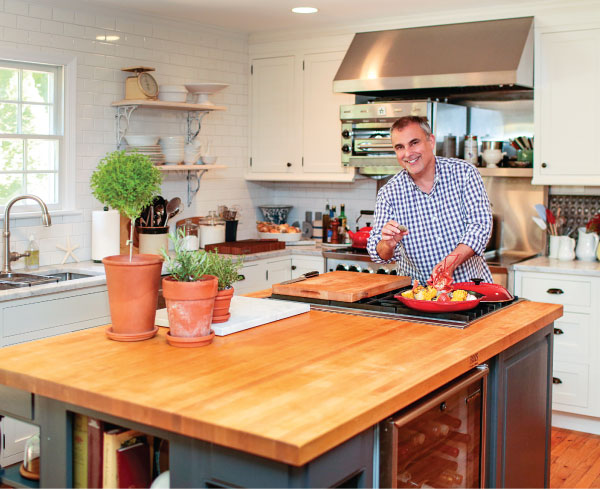 The wet wall features an 11-inch, extra deep sink with a sliding colander for rinsing and draining. The faucet’s pull down head reaches every corner without the countertop clutter of a separate sprayer.

The salamander is a splurge typically found in commercial kitchens that blasts food with up to 22,000 BTUs of flame heat, finishing them quickly for the show.

This island is wider than the one it replaced but there is still at least 36 inches between it and the base cabinets so 2 people can walk by. The cooktop makes it easier to interact with guests during meal prep.

The hot wall’s commercial-style range sports six burners with grates at the same height so pans can be pulled off the burner to a lower heat without tipping. 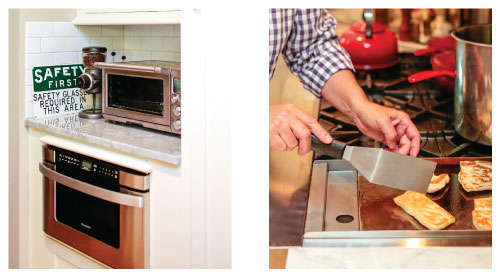 Hot, hot heat
Hirsch expanded his pantry area and made room for less frequently used appliances like the toaster oven and drawer-style microwave. While the salamander isn’t a must, Hirsch loves the griddle option on his range for everything from Johnnycakes to flatbread.