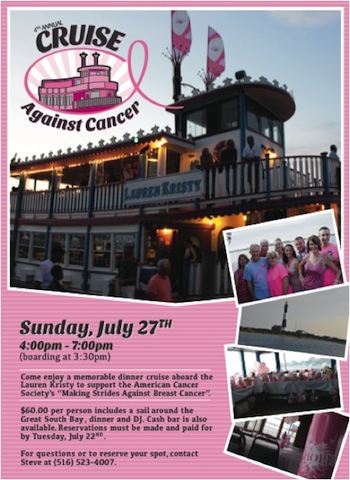 You won’t want to miss the 4th Annual Cruise Against Cancer event on Sunday July 27th, a night full of dancing, dining and raffles for a good cause.

What sounds even better than a beautiful summer evening of music, dancing and dining while cruising along the Great South Bay? Doing all of that for a good cause. Meet Steve Russell. The man behind the annual Cruise Against Cancer event; a night of fun onboard The Lauren Kristy while raising money for The American Cancer Society. For $60, cruisers get to enjoy three hours of dinner, dancing to a DJ, raffles, and of course donating to an amazing cause.

Russell’s involvement with The American Cancer Society started after his mom’s passing from cancer.
“She lost her battle in 2001 and I wanted to do what I could in her honor,” Russell said.

Before fundraising for The American Cancer Society onboard The Lauren Kristy, Russell started fundraising with help from Applebee’s Restaurants and hosted a barbeque lunch and dinner event one year at Long Island Macarthur Airport for the employees. He had the idea to begin fundraising on the cruise after spending time on the boat during a Father’s Day cruise. Russell spoke with Captain Mike on holding a fundraiser on the ship and after agreeing to do so, the first “Cruise Against Cancer” event took place in August of 2011 and raised $1,400.

The cruise is becoming increasingly successful each year. Last year’s cruise drew in a whopping $3,200. Combined with the money that Russell continues to raise each year for the breast cancer walk, Russell proudly wrote a check of more than $5,000 last year to The American Cancer Society.

“My two goals are to simply make more than the previous year and to run a cruise that everyone will enjoy and be happy to contribute towards,” Russell said.

Tradition and good cause are just two of the things that draw cruisers back to the event each year as well as attract new cruisers. Russell said that each year the same DJ company, caterers, and ship are used and “the people that come back each year do so because they believe in the cause, they want to help in the fight to end cancer and they always have a good time on board.”

Each year, however, Russell tries to think of ways to improve the cruise. Some of the improvements he’d like to implement are doing a video presentation on board and inviting sports or TV celebrities on board to “treat” cruise guests.

For those who haven’t attended Russell’s event yet, he gave Pulse Insider an idea of what to expect on this summer’s cruise.

“Our three hour cruise boards at 3:30 pm sharp, sets sail at 4 pm and tours The Great South Bay along the peaceful shores of Fire Island. Dinner is served on the lower deck, while continuous music and dancing take place on the upper deck. The Paddlewheel Bar is also available for cash purchases. We will also have a Chinese Auction, a 50-50 and a special Gift Card raffle.”

If you want the chance to win awesome raffles, eat delicious food, and dance to amazing music, clear your calendar for Sunday July 27, for what will be an unforgettable night in the battle against cancer. Reserve your spot by Tuesday July 22, by calling Steve Russell at 516-523-4007 or e-mailing him at srr1528@nulloptonline.net. 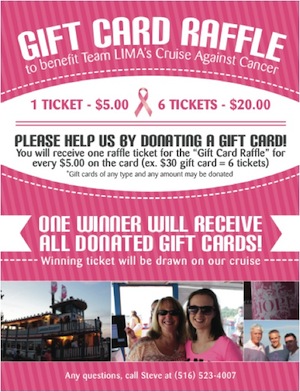 Steve Russell relies on the community’s help in putting on this amazing event. Donate a gift card for the big “Gift Card Raffle” where one lucky raffle winner will win all of the donated gift cards. For every $5 worth of a gift card that you donate, you get one raffle entry towards this awesome prize. For questions or to donate a gift card, contact Russell at 516-523-4007.