The diverse group of playwrights and directors spent about two weeks on campus collaborating with fellow artists, experimenting with new ideas and talking about the future of theatre.

“It’s the chance to step away from the daily routine,” Jim Nicola, artistic director of New York Theatre Workshop said. “There’s no pressure to perform.”

Adelphi’s Performing Arts Center and theater program aided the playwrights and directors in the development of ideas for new and in-progress productions while holding forums that examine critical issues in the theater community and encouraging conversations around those issues. 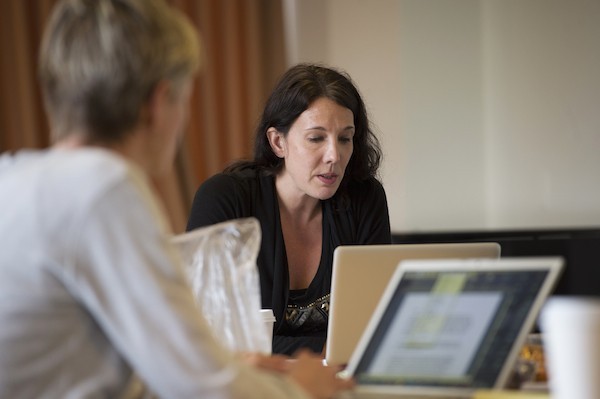 This summer those discussions focused on how to develop folks to lead theatres, a conversation the university sees as important as it continues to educate emerging playwrights and directors.

“It keeps us connected to the performing arts,” Adelphi University Dean of the College of Arts & Sciences Sam Grogg said.

University faculty had the chance to participate in the discussions and some Adelphi University students served as interns during the residence.

“I’m very proud of the combination of workshops and development of new plays,” Grogg said.

Much like Larson workshopped his play, but during a short time period, New York Theatre residents at Adelphi University workshopped their ideas finishing their time on campus by sharing performances, but only if they wanted to. Maybe someday the director of playwright of a new Broadway show will be able to say the play started on Long Island at Adelphi.