There’s nothing in our lifetime that hasn’t already been written or said about Bob Dylan, and there’s nothing about our lifetime that Bob Dylan hasn’t already written or said. So, in this the sixth decade of his creative life, Dylan’s artwork – as featured in Bob Dylan – The Drawn Blank Series, showing at Mark Borghi Fine Art in Bridgehampton from July 4 to July 18 – might not be the revolutionary acoustic-to-electric revelation that “Like A Rolling Stone” was in 1965, but it is yet another valuable window into the creative mind of the minstrel whose words and music continue to reverberate throughout the canyons of our cultural lexicon.

As always with Dylan, it’s interesting to follow the river to the source. The sketches and drawings that culminated in the Drawn Blank Series were originally created during Dylan’s time on the road between 1989 and 1992 and finished five to ten years later. That trajectory might be seen as a microcosm of Dylan’s process at large, where ideas surface, crystallize briefly, disappear and then return later on to reach their organic conclusion.

At the time of the original drawings, Dylan’s ever-evolving recording career took its requisite left turn as he moved away from the thick production of Oh Mercy (1989) and Under a Red Sky (1990) to re-visit the acoustic vibe for the production of Good as I Been to You (1992). Of course, since then Dylan has cycled through multiple phases; including the Grammy greatness of Time Out Of Mind (1997), only to come full circle and light the old torch once again with rootsy albums like Love and Theft (2001) and Together Through Life (2009). 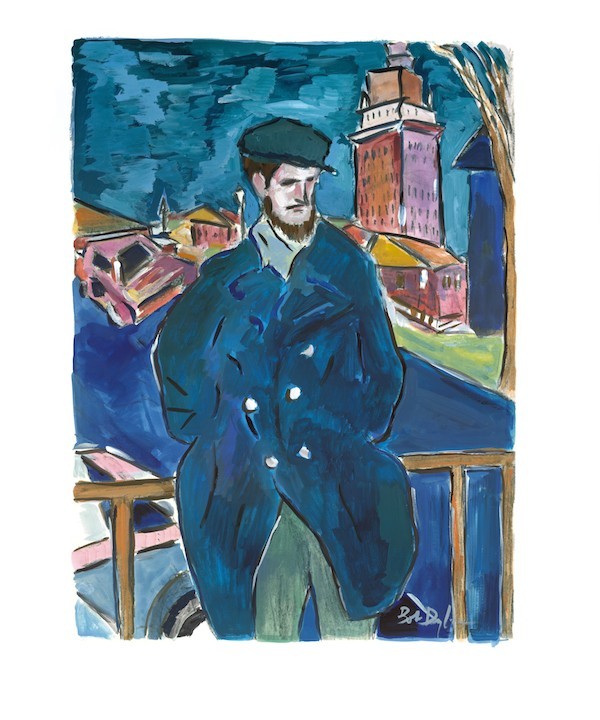 Back in ’92, Good as I Been to You contained no original Dylan compositions. Instead, it put the troubadour on the road back home, with Dylan interpreting a big handful of warm folk standards and covers. The stripped back sound and earnest delivery of those recordings dovetail effortlessly with the works in the Drawn Blank Series.

This relationship might best be seen in Train Tracks (2007). Using depth of field and nuanced depth of color within the blue/purple sphere, Dylan gives us what he knows best; a sense of longing, loneliness and the thirst for discovery. Just as wanderlust lies at the heart of Dylan-kissed folk standards like “Froggie Went a Courtin’” and “Step It Up and Go” from Good As I Been to You, so too does Train Tracks stir the gypsy soul. The painting begs us to hitch a ride, to re-discover the rail riding hobo America of Kerouac and Cassady – and gives us hope that this America might still exist, if only in the blue/black shadows of our collective memory – and of course, in the music of Bob Dylan.

Rose on A Hillside (2010) is a brighter effort, one in which Dylan’s sense of elegance and fragility shines through. The acrylic on canvas piece is an exercise in simple shape and shades of primary color, yielding a result that evokes the homey, happy yellow and brown thatched roof villages and the phantasmagorical pinks and reds of Marc Chagall’s work while also hinting at the loose brushstrokes and effervescent pre-cubism of Picasso.

Man on a Bridge (2010) is a warm sketch of mixed media on paper that, while showing a solitary man in stationary mode, somehow speaks to the weariness of the road and the imagined miles under that man’s feat. Even the title reflects Dylan’s itinerant reality. The figure in the piece hints at Cezanne’s Man With a Pipe (1892) while at the same time reminding us of late-era Dylan himself, relentlessly restless, stopping only long enough to get a glimpse (and for us to get a glimpse of him) before moving on to the next city, the next gig, the next blurred landscape.

The beauty of all of Dylan’s work, musical or otherwise, lies in its honesty. From Freewheelin’ to Tempest and everything in between, we get the sense that the arc of all of Dylan’s work would have remained the same whether he was catapulted to superstardom or not, whether he ever transcended his Midwestern roots and West Village folkie beginnings or not. Dylan’s perceived obscurity is mere smoke and mirrors; the truth is that he quite readily and accessibly embodies the paradox of complexity and simplicity; which is to say, he embodies humanity. Count The Drawn Blank Series as another compelling signpost on that dusty dirt road. 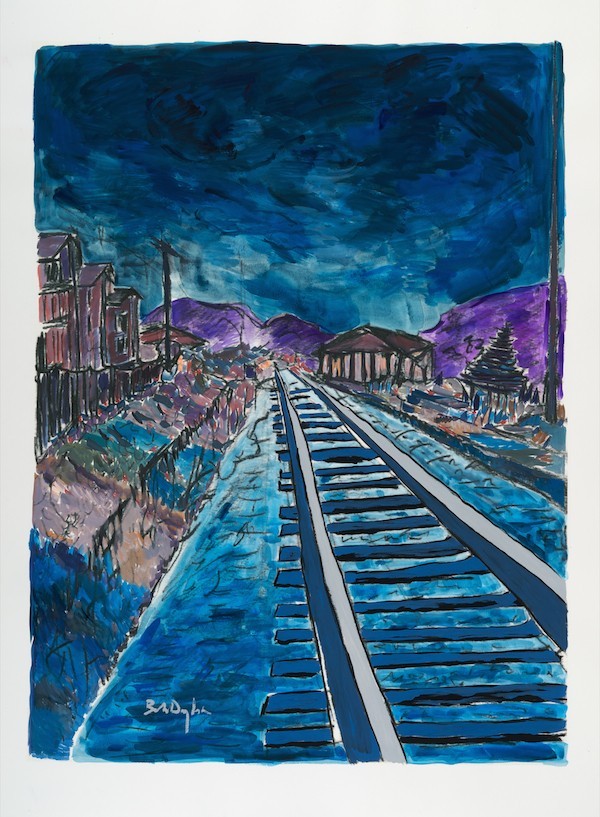