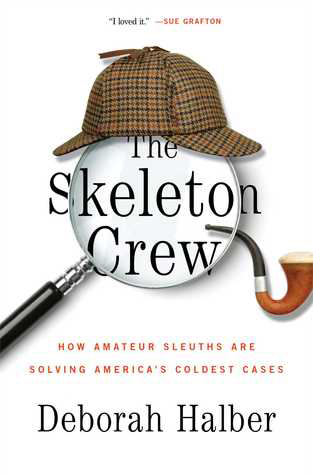 You can’t find your keys. Again.

It happens every now and then: you get busy, distracted, and you put them down somewhere they don’t belong. Then you spend an hour looking for them.

Fortunately, you always find them because they won’t travel far without you. But, as you’ll see in the new book “The Skeleton Crew” by Deborah Halber, some things go missing for a lot longer…

Wilbur Riddle was a well-driller back in May of 1968 and was waiting for a job to start when he noticed a canvas sack on a stone slab just off Kentucky ’s Route 25. As he got closer, he could see that something was inside, and then he could smell it. He kicked the tent-canvas bag and was shocked at what he spied.

Inside the bag was a girl, curled up and bound tight with a rectangular bit of white cloth over her shoulder. She was long dead – long enough that identifiable features were nearly gone. Without a name to attach to the body, the media dubbed her Tent Girl.

If you’re a fan of TV detective shows, you might think that the world is littered with unidentified bodies – and there are “shockingly large numbers of them out there,” says Halber. A survey done several years ago indicated “more than thirteen thousand sets” of unidentified bones moldering in morgues, but one estimate places the number nearly three times higher. While “many people are unaware of the extent of the problem,” a fierce group of folks are well-acquainted with the issue.

Lurking online under pseudonyms and handles that often belie their age and gender, these people spend hours “obsessed” with matching data for missing persons with data for unknown bodies. Often sneered at by local police (and sometimes totally ignored), this “Skeleton Crew” has single-handedly solved decades-old cold cases, given names to corpses anonymously buried, and offered closure to families of people who vanished generations ago.

They’ve solved murders in Missouri . They’ve ID’d vagrants in Vegas. They’ve closed cold cases in Canada . And in a situation that launched a career, one man ascertained the identity of Tent Girl.

You know you’ve got a great read in your hands when, on page two, you mourn that the book will end. That’s what happened when I read “The Skeleton Crew.”

With a mystery-true crime-science mix of facts and detective stories, author Deborah Halber explains why this two-pronged issue exists and how modern technology and amateur sleuthing is helping lessen it.
Along the way, Halber tours morgues and back-rooms, lurks near an exhumation, and tries her hand at solving one of New England ’s best-known cases.

And on that one, she learns that there’s some information best left buried…

If you tend to get a little queasy, this isn’t the book for you. It’s graphic and gruesome, but oh-so-fascinating and hard to put down. When it comes to your Books to Read pile, in fact, “The Skeleton Crew” is one that shouldn’t be missing.