The success of Niko Weisse, my #beerselfie, has prompted Great South Bay Brewery to revamp the concepts of several beers—and the new focus is my beard. The first revamp is Great South Bay’s summer seasonal, Blonde Ambition. Its new incarnation, Beard Ambition, will debut at undisclosed and nonexistent locations on Saturday, July 19. The label is below. 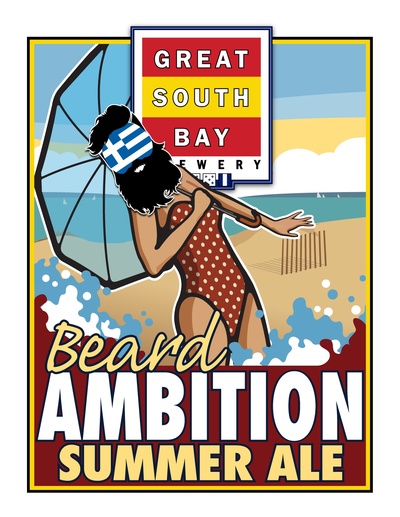 Great South Bay will host a parade prior to the release, starting in Brooklyn, where I currently reside, and ending at the brewery’s 13,000-square-foot home on Drexel Drive in Bay Shore. The route is roughly 65 miles. I will ride the length of the parade on a motorized cloud of existentialism. The motorcade will include miniature mechanical mermaids used in the 1953 film, Attack of the Coney Island Merbots, and Mom’s Plate. A performance by musical duo, Kid Break, will close the ceremony.

Beard Ambition will have the same recipe as Blonde Ambition, a light-bodied, pale-colored, apricoty-flavored ale, “but with much lower levels of estrogen,” says brewmaster Rick Sobotka. “There is something about Niko’s facial hair that empowers our customers unlike anything I have ever seen. The ancient Greeks believed in mystical powers embedded in the braids of their hair that gave them Zeus-like strength. We want every one of our beers to simulate this same stimulating feeling found in Niko’s beard.”