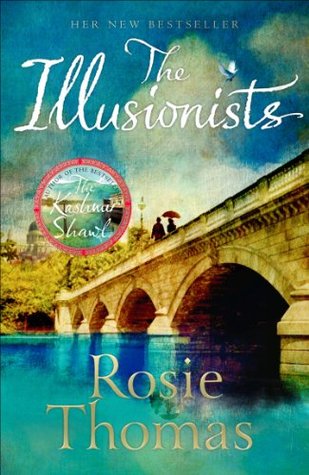 Now you see it. Now you don’t.

The magician’s coin jumps from hand to hat and though you’re astounded, that would be an easy trick to learn. You could research, and know how he made an elephant disappear. You could teach yourself how to conjure the right card from a deck.

But why would you? Being baffled is half the fun – unless your life depends on sleigh of hand. And then, as in the new novel “The Illusionists” by Rosie Thomas, the trick’s on you.

At the age of ten, and just before he killed a boy, Hector Crumhall fell in love with magic.

He couldn’t quite get over the stunts an itinerant conjurer performed. Hector pestered his father until the elder man explained that there was no such thing as magic, that it was all just entertainment for fools, but Hector thought it fascinating. So when he needed to flee tiny Stanmore for London , there were dreams of magic that the boy took with him, and little else.

But that was all he needed – that, and a name change to something more mysterious. And thus, only his best childhood friend, Jasper, knew the truth about Devil Wix, and that was how Devil wanted it to stay.

And it might have remained so, if not for a fortuitous meeting with a street performing dwarf who called himself Carlo. Recognizing an opportunity, Devil partnered with Carlo for a feat of illusion that would make them rich by attracting a good audience.

At just twenty years old, Eliza wasn’t like other women. She spoke her mind, traveled without chaperone and, against her father’s wishes, took a job as a model at an artists’ school. For a Victorian-era lady, that was scandalous but Eliza knew what she wanted – and what she wanted was Devil Wix.

Though she had surely caught his eye, Devil wasn’t the only man who wanted Eliza’s company. Jasper was madly in love with her, as was Carlo. And so was Herr Bayer, the automaton-maker who craved Eliza’s beautiful voice…

I suppose, with a theme of Victorian magic, sideshows, and darkness, it’s inevitable that this novel would be compared to two blockbuster books from summers past.

Here’s the thing: “The Illusionists” starts out well, with shades of malevolence that will give you shivers for around 30 pages. And there’s about as far as it goes.

After that, author Rosie Thomas’ story continues like a broken-down dray horse, forever plodding nowhere in particular; in fact, I waited for a punch line that never seems to come. There is no edge-of-your-seat climax in this novel – there’s no climax at all. The characters aren’t particularly likeable. I even thought the romance here was trite and predictable.

I guess if you’re a fan of 19th-century theatre or early prestidigitation, this novel might appeal to you; the descriptions and historic details here are exceptional. Other than that, though, as far as big enthusiasm for “The Illusionists,” I just can’t see it.