Infiniti doesn’t make a bad car, and the Q70 continues the company’s skill at providing upscale comfort, smart looks, speed when necessary and the latest in technology. The only odd thing about the Q70 is that it was known as the FX until this year’s name change. Ditto almost all Infiniti’s new models now sporting different monikers, none of which seem to have anything to do with anything. The newly-named QX-60, QX-80, Q40 and Q70 all sound like something you’d buy to loosen a bolt or stop a hinge from squeaking.

That said, the Q70 was a lot of fun over a week’s test. Its strongest suit is its appearance, with signature left/right hood bulges implying authority and power. The base model comes with a V6 and a more powerful V8 engine is also available for those wanting more blast-off and passing power. A seven-speed automatic transmission comes standard and it’s reasonably smooth, though quickly finding gears can be challenging when doing the drive-reverse-drive-reverse parallel parking tango. Fuel economy is an EPA-estimated 17/24 mpg city/highway, typical for this class. Whether V6 or V8, though, nimble handling and precise steering make this a fun summertime whip.

The inside is plush and comfy, with all the high-quality materials one demands in this class. There isn’t a whole lot of trunk or backseat room, but the driver gets a cushy ride, so maybe this is the car you buy when you want solo time. Standard features also include an 11-speaker Bose stereo system, Bluetooth phone connectivity, dual-zone automatic climate control and a backup camera. Spring for options and you can get a voice-activated navigation system, heated and cooled front seats and an Around View Monitor camera system. Distance Control Technology and Intelligent Cruise Control help you avoid bashing others. Exclusive VVEL®technology continually tunes valve lift and timing to give quicker engine response and a broader torque curve with enhanced economy.

There are other vehicles of varying charms and demerits in this class and price range, of course. But if you’re already an Infiniti fan, the Q70 will wow you. 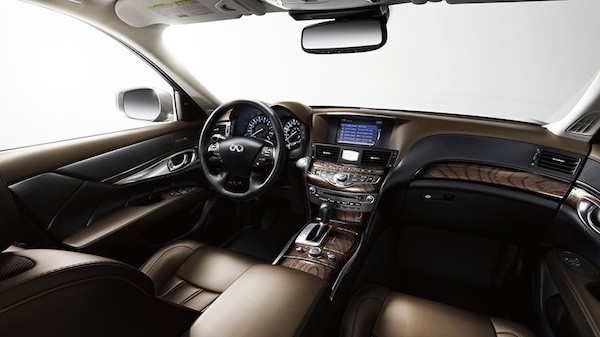