Roz Dimon has what many might consider to be the luxury of making art from a secluded space surrounded by natural beauty. At her studio situated on the same bucolic property as her home on Shelter Island, Dimon looks out over an expanse of garden that abuts a nature preserve. Daily visitors include deer, rabbits, and birds, the last finding nourishment at several feeders hoisted in the tree outside the glass sliding door of her studio. 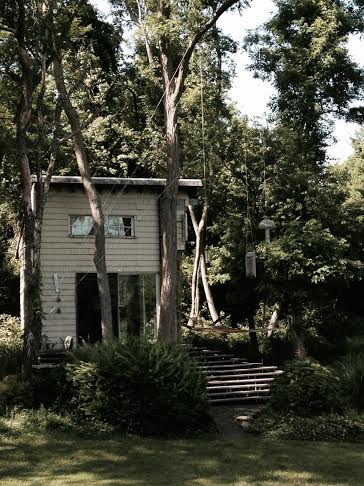 Her surroundings, however, don’t seem to impact and are generally not reflected in what she creates. Not only is her subject matter usually about man-made objects and not the natural world, Dimon has been creating her work over the last two decades exclusively on the computer, that window onto a virtual world.

Using a Wacom tablet with her computer, Dimon makes digital paintings and drawings, many with socio-political content, most lately representing everyday things like cutlery or pencils in subtle tones of black, white, and gray. With these, the artist makes reference to her mixed media work from the 90s representing common supermarket items like a Pepto-Bismol bottle or a jar of Grey Poupon.

In these feverishly rendered 20th Century Artifacts the artist, who has a B.F.A. in Drawing and Painting from the University of Georgia, exhibits a personal Pop style not just in her use of familiar commercial items. In addition to the graphic quality of the nervous lines and bold colors she employs, Dimon scrawls words, such as “Shit No Longer” in Pepto Bismol (1997), or “Seeing Clean” and “Seeing thru bullshit” in Windex (1996). There’s a street-savvy edge to these works and they’re in all senses fun, fresh, and critical of our materialistic consumer society. 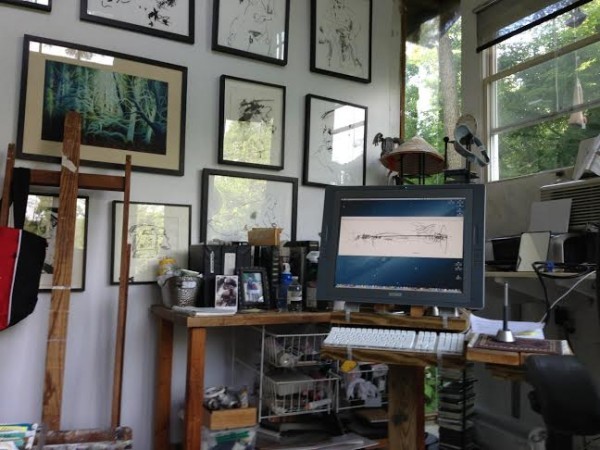 The artist’s tools, including the Wacom tablet

Dimon’s early essay into a digital realm came in the 80s. In the beginning of that decade she started her Information Paintings and wondered at the “pixilation” of her compositions. These works and the earlier Wall Street Boys are highly patterned, composed of multiple visual layers and small squares that one could consider as pre-digital picture elements.

In 1984, Dimon began studies in Computer Arts at the School of Visual Arts, New York and officially embarked on her exploration and application of digital media. While she did not entirely abandon traditional modes of painting and drawing, the late 80s and early 90s found her making digital paintings. One dense urban representation, Lost in a City of Dreams (1990), is in the permanent collection of AT&T.

Digital has had a seemingly inexorable appeal for Dimon. She has been known to settle into life drawing sessions with this relatively unusual (and misunderstood) artistic tool, to create simple, dynamic nudes. Today, when most everyone knows what Photoshop is, but may resist its non-traditional application, she continues drawing on her tablet, refining her expression and certainly able to do many more things than were possible in previous decades of computer art.

Seeking to cope with September 11th attacks on the World Trade Center, where she had worked for many years, Dimon was led to study religious iconography and icon painting, with a resulting work holding pride of place in a corner of her studio. This experience brought her to the intricately layered, multi-dimensional works titled DIMONscapes, such as Pale Male. Two editions of this work were acquired by the 9/11 Memorial Museum and the Metropolitan Museum of Art, respectively.

At her studio, in addition to the usual assortment of finished work, sketches, clippings, notes, and images for inspiration, Dimon has a collection of objects piled around, ready for use in a drawing. Friends are known to leave things like tennis rackets and golf clubs for her to portray. Often, the objects have some meaning, sentimental value, or association, so that they become like portraits of their owners.

While the majority of these objects might seem inoffensive, closer observation of selected pieces (knife, razor, arrow, even the safety pin) and an evaluation of the series on whole may render them potential weapons. This is a direction Dimon admits she has been leading to in her choice of objects, always at the ready to make a statement on potentially contentious topics, though it will always be expressed in an eloquently poetic, sometimes humorous, manner. 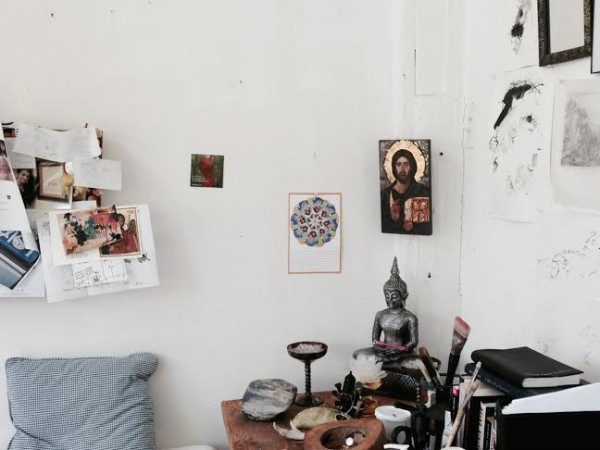 Inside the studio, an assortment of clippings, sketches, materials, and objects, including an icon painting by the artist

The upcoming exhibition Artifacts II at the Havens House Barn of the Shelter Island Historical Society, will feature several of these digital drawings. Small- and large-scale prints on rag paper incorporate the selection, including Safety-Lost (2013) and The Hutto (2014). Some will be presented in a 60 x 30-inch size that is sure to impact; all the better to see the details that compose these intriguing drawings.

The exhibition will have an opening reception on Saturday 26th July, from 4 to 7pm, and is on view the week of the 21st to the 29th July, noon to 5pm, or by appointment (917-406-2657). A percentage of sales will be donated to The Shelter Island Historical Society.

The work will already be on display during the 2nd Annual Black & White Benefit on Saturday 19th July, 6 to 8pm, though ticket reservations for this event are required.