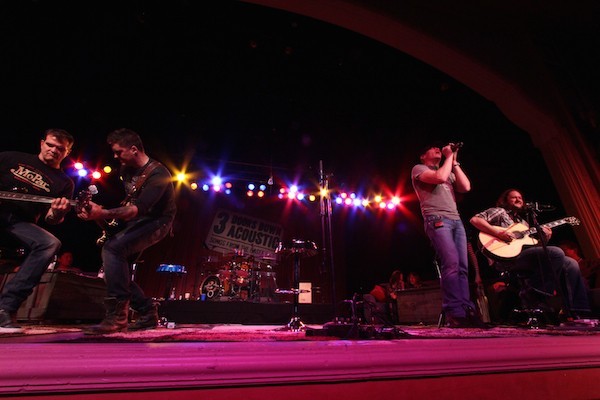 In the nineties, 3 Doors Down drew crowds from the Deep South of its native Mississippi to New York’s (now defunct) CBGB’s. The early 2000s brought post-grunge mega hits like “Kryptonite,” “When I’m Gone” and the ballad “Here Without You.” Their latest studio release, 2011’s Time of My Life, debuted at number 3 on the Billboard charts. Then they released The Greatest Hits in 2012, which included nine remixed number ones and three new songs, including “One Light.” Having sold over 20 million albums worldwide since the start of their career, the alt-rockers are working on a new album set for release in 2015.

3 Doors Down has been getting good feedback on the three new songs they’ve completed from the upcoming record: rocker “You Better Believe It,” the Latin-infused “I Don’t Want to Know” and the reflective “Pieces of Me.” Frontman Brad Arnold recently said this about the upcoming record: “I want it to be fun and have some substance to it. I think people are done with songs that are so serious. I think we got that out of our system in the late 90s and 2000s.”

The quintet has played Jones Beach and they sold out The Paramount in Huntington last year. Now you can catch 3 Doors Down: vocalist Brad Arnold, lead guitarist Chris Henderson, drummer Greg Upchurch, guitarist Chet Roberts and bassist Justin Biltonen —in an intimate setting when they bring their acoustic tour, Songs from the Basement, to the Space at Westbury on Tuesday, July 29th. Expect to hear the hits, some deep cuts from their catalog and some surprises. And check out opener Amy LaVere, an Americana singer/songwriter/upright bassist from Tennessee.