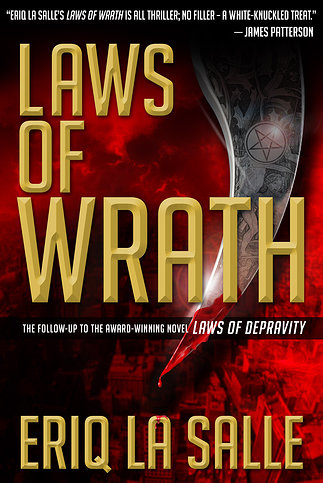 One for me, and one for you.

Divvying up candy when you were a kid was an almost-exact science. Everybody had to have an equal amount, and they watched closely to ensure that happened.

One for you, one for me. Even Steven, it’s all the same. But, in the new book “Laws of Wrath” by Eriq La Salle, what’s good for the goose might kill the gander.
Phee Freeman could never forget why his brother left the family.

A.J. was gay, which was something that neither Phee, nor their father, Clay, could accept back then. When Phee and Clay learned the truth, it was as if A.J. had never been born. Phee couldn’t forget that, nor could he forgive himself for shunning his only brother – especially when A.J. was found mutilated and dead.

Naturally, Clay Freeman mourned for his eldest son but as an older man, Clay had seen death before. He’d lost his beloved wife years ago – but prior to that, he’d been on the wrong edge of trouble and the right end of a gun. It wasn’t something he was proud of, but that was all in the past.

Although it wasn’t protocol, when Detective Quincy Cavanaugh was assigned to investigate the murder of A.J. Freeman, he needed his partner by his side. Having been a team for years, he and Phee were known around the NYPD for being the best at solving unusual cases – so when a second mutilated body was found, Cavanaugh knew that this would be one of the strangest cases of all.

Years ago, there were other corpses with similar mutilations, but Dr. Daria Zibik, the person behind those murders, was sitting in prison. She couldn’t have committed these crimes, but Cavanaugh knew that Zibik led a Satanic cult and had prepared someone to take over until her release. It made sense for him to offer Zibik a deal in order to figure out why innocent people were being tortured and killed.

But time was of the essence. A killer was on the loose, and he apparently had the Freeman family in his sights…

There are two things you need to know about “Laws of Wrath.”

First of all, this book screams for an editor and a disabled comma key. Yes, it’s rough, littered with extraneous (and incorrect) punctuation and choppy sentences – both of which are increasingly irritating as the pages fly by.

Which brings me to the second thing: the pages will fly by because, though his story can be quite gruesome at times, author Eriq La Salle gives thriller fans that edge-of-the-seat feeling they crave. There are good guys here that are filled out nicely and criminals who couldn’t be more evil. I was also pleased to note that while I saw some of the ending coming, I didn’t see it all.

And when you ignore its punctuation flaws, “all” is what you’ll get with this otherwise fine thriller. If you want to pick a nail-biter, in fact, “Laws of Wrath” may be one for you.