They came, they grilled and one conquered. It was an overcast day at Shorefront Park as 10 restaurants competed to the win the Second Annual Battle of the Burger presented by Long Island Pulse and Amstel Light. The smell of grilled burgers wafted through the air drawing an estimated 1300 people to Patchogue, but the rain held off as if the skies above knew there was important eating and voting taking place. 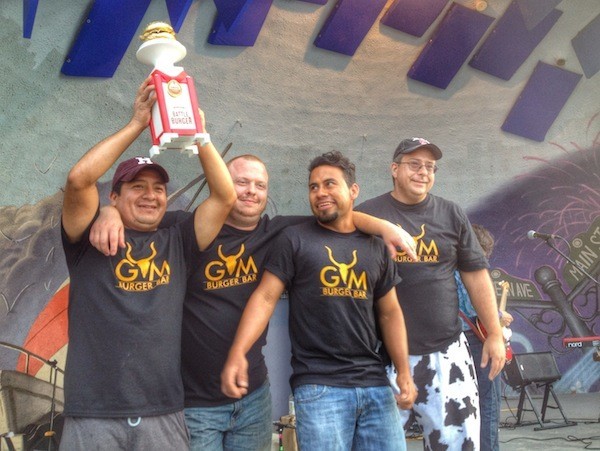 When all the votes were tallied, the winning burger came from the only Nassau County restaurant left in the three-month competition.

“I was surprised, we were coming from so far away, without a lot of support,” Frank Greco, the executive chef for the George Martin Group, which owns GM Burger Bar said.

GM Burger Bar won over the crowd with their Black Jack Burger. This wasn’t a burger created solely for the competition, as some other restaurants did, but rather one found on their lunch and dinner menu.

“It’s been a staple of our menu since the day we opened,” Greco said.

Composed of candied bacon, pepper jack cheese, black jack sauce, and cheery peppers on a brioche roll, it’s the burger blend that may have set them apart. Earlier in the summer GM Burger Bar manager Eric Bliss-Fila said their secret weapon is the burger blend.

The Black Jack Burger is their exclusive blend of sirloin, brisket and shortrib. But Greco said that in addition to the blend it’s the whole burger that set them apart.

“It’s got a lot of good flavor, not just the blend but the candied bacon, cherry peppers…”

It seems the crowd at Shorefront Park agreed despite a tough competition from the other restaurants which made voting difficult.

“How to choose a winner with so many great options,” Kristina Simonsen tweeted shortly before voting closed.

The Golden Burger Amstel Light trophy now sits at GM Burger Bar, but there was no celebratory rest for the winners. They were back at work Monday and Greco was busy preparing to open another restaurant in Syosset, George Martin’s Grillfire. In February, they’ll get a bit of rest, when GM Burger Bar enjoys their other winnings, an all expense paid trip to the South Beach Wine and Food Festival.