Stroke-play medalist Bethany Wu fell to 64th-seeded Lakareber Abe, 6 and 4, in Wednesday’s opening round of match play at the 2014 U.S. Women’s Amateur Championship, being conducted at the 6,297-yard, par-70 Nassau Country Club.

Abe, 18, of Angleton, Texas, took the lead with a birdie at the par-3 third hole and never looked back. Abe’s solid play, combined with Wu’s admitted struggles in all aspects of her game, allowed her to cruise through the rest of the match.

“It was just smooth sailing,” said Abe, the runner-up at the 2013 U.S. Girls’ Junior Championship and an incoming freshman at the University of Alabama. “I didn’t get too up or too down. Just kind of steady the whole time.”

Wu could not gain any traction. Two down at the turn, Wu parted ways with her local caddie, and good friend and 2013 U.S. Women’s Amateur Public Links champion Lauren Diaz-Yi took over Wu’s bag. But the change did not make a difference in her performance. Bogeys by Wu at Nos. 10-12 extended Abe’s lead to a daunting 5-up margin.

“I wasn’t hitting it solid,” said Wu, who became the first top seed since co-medalist Jihee Kim in 2011 to fall in the round of 64. “After I lost the third hole, it kind of got in my head. I tried to come back so quickly, and it just didn’t work out. Overall, just a terrible day.”

Abe survived an 8-for-3 playoff that lasted three holes – two on Tuesday and another Wednesday morning – to lock in the last spot in the match-play bracket. She also defeated Wu in the semifinals of the 2013 U.S. Girls’ Junior.

“We’re both such fierce competitors, it’s not hard to put (friendship) aside during the match, while you’re hitting the shot,” said Abe, who teamed with Wu on the victorious West Team at last month’s Wyndham Cup. “Walking down the fairway, you’re still friends, whatever happens.”

Abe’s next opponent will be fellow Wyndham Cup West teammate Hannah O’Sullivan, 16, of Paradise Valley, Ariz. O’Sullivan trailed for much of her match with University of Arkansas junior Gaby Lopez, 20, of Mexico. But birdies at the final two holes, including a masterful chip-in from just short of the green at No. 18, gave O’Sullivan a 2-up victory.

“I remembered all the chips I’d practiced and I just chipped it in,” said O’Sullivan. She called her victory “revenge” for her first-round loss at last month’s U.S. Girls’ Junior, held in her home state.

Defending champion Emma Talley, 20, of Princeton, Ky., needed a 19-hole marathon to eliminate Jiyoon Jang, 16, of Rancho Mirage, Calif. Jang went to No. 18 with a 1-up advantage. However, her approach rolled over the back of the green, and Talley two-putted for par to send the match to extra holes.

“Coming down the stretch, I definitely gave her the opportunity to close it out,” said Talley, who sank the winning putt for the USA at the Curtis Cup Match in June. “I also had some opportunities to get it closer and neither one of us did it.” 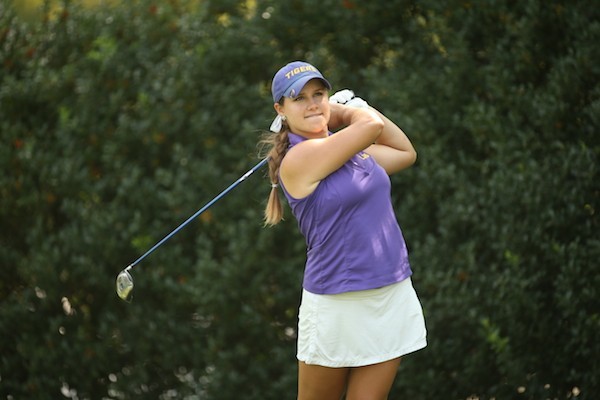 2014 U.S. Women’s Amateur Garly Ray Goldstein
Talley finally got her opportunity on the first extra hole, the par-4 first. Jang again sent her approach to the back of the green, and she stubbed her chip from the short rough well short of the hole. Despite an awkward stance, Talley deftly chipped to tap-in distance and took the win when Jang left her par attempt short.

“So far, every day has been better,” said Talley, who will meet 2014 U.S. Girls’ Junior champion Princess Mary Superal in Thursday morning’s round of 32. “Hopefully, it will continue.”

In addition to Talley, three other members of the 2014 USA Curtis Cup Team advanced. Mariah Stackhouse, 20, of Riverdale, Ga., won in 20 holes over 14-year-old Chakansim (Fai) Khamborn, of Thailand. She will next face Stanford University teammate Lauren Kim, 19, of Los Altos, Calif., who posted a 4-and-2 win over Saki Iida.

Ally McDonald, 21, of Fulton, Miss., never trailed in her 2-and-1 win over Carly Ray Goldstein, 19, of Coral Springs, Fla. Her round-of-32 opponent will be 2014 U.S. Women’s Amateur Public Links runner-up Eunjeong Seong. Seong, 14, of the Republic of Korea, advanced with a 2-up win over Elizabeth Doty.

Alison Lee, 19, of Valencia, Calif., advanced with a 3-and-2 win over August Kim, 19, of St. Augustine, Fla. Lee held a 3-up lead through seven holes, just to see Kim win holes 10-12 to square the match. But the UCLA sophomore won the ensuing three holes to regain her 3-up advantage and, ultimately, the win.

Lee’s UCLA and Curtis Cup teammate Erynne Lee was not so lucky. The 21-year-old from Silverdale, Wash., fell to Simin Feng, 19, of the People’s Republic of China, 1 up.

UCLA’s third Women’s Amateur player, Bronte Law, fell in 21 holes to Jing Yan, of the People’s Republic of China. Law played for Great Britain and Ireland at the 2012 and 2014 Curtis Cup Matches.

Other notables to advance include Grace Na, 21, of Alameda, Calif., who eliminated 12-year-old Karah Sanford; World No. 2 Brooke Mackenzie Henderson, 16, of Canada; and World No. 3 Su-Hyun Oh, 18, of Australia.

The 2014 U.S. Women’s Amateur Championship consists of 36 holes of stroke play followed by six rounds of match play. The championship is scheduled to conclude with a 36-hole final at 8:30 a.m. EDT on Sunday.

The U.S. Women’s Amateur is one of 13 national championships conducted annually by the United States Golf Association, 10 of which are strictly for amateurs.

Results from the first round of match play at the 2014 U.S. Women’s Amateur Championship, being conducted at the 6,297-yard, par-70 Nassau Country Club: