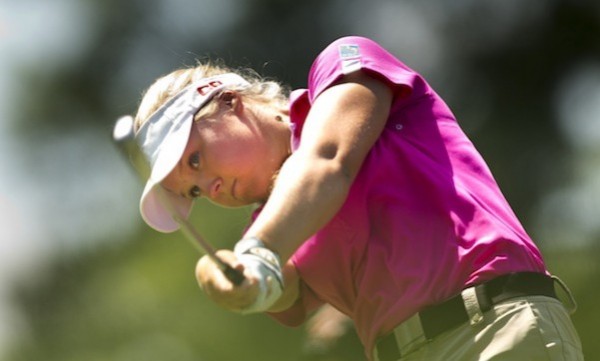 Brooke Mackenzie Henderson plays her tee shot on the 16th hole during the semifinal round of match play at the 2014 U.S. Women’s Amateur at Nassau Country Club in Glen Cove, N.Y. on Saturday, Aug. 9, 2014. Image: USGA/Darren Carroll.

Henderson, No. 2 in the Women’s World Amateur Golf Ranking™, found herself in an early hole. After Henderson lost the opening hole with a three-putt bogey, O’Sullivan birdied the par-4 second for a quick 2-up lead.

“I made a couple mistakes early,” said Henderson, the low amateur at the 2014 U.S. Women’s Open. “I was able to fight back, and that’s really key to learn how to do that.”

Bogeys from O’Sullivan at Nos. 3 and 10 squared the match, and Henderson converted a 50-foot birdie chip from just short of the 14th green for a 1-up lead.

That small advantage was all Henderson needed. The duo halved the remaining four holes, sending Henderson to the championship final.

“My short game was great all day,” said Henderson, who will represent her home country at next month’s Women’s World Amateur Team Championship in Japan. “I was able to squeeze it inside 5 feet and made it a lot easier on myself and even added a little more pressure on Hannah. Usually, that’s one of my weaknesses, but today it was definitely my strength.”

While O’Sullivan was disappointed with the final result, knowing that she took one of the best players in the world the full 18 holes helped soften the defeat.

“It gives me a lot of confidence,” said O’Sullivan, who has verbally committed to the University of Southern California for the fall of 2016. “I know I’m a good player … and it makes me believe that I can compete anywhere.”

Gillman earned her first lead when Lee three-putted for bogey at the par-4 ninth. Gillman’s steady hand paid off, as she won the next three holes with pars to build an insurmountable 4-up advantage.

“I knew that if I just kept (making pars), then I could probably close it out soon,” said Gillman, a 2016 University of Alabama verbal commit. “I just tried to stay focused and not get too ahead of myself.”

Lee showed a glimmer of life with a birdie at the par-4 13th. But Gillman immediately blocked that momentum by converting a 10-foot birdie at No. 14 to go dormie-4.

“I bogeyed so many … and you can’t afford that do that here at match play,” said Lee, who played to the equivalent of 5 over par, with the usual match-play concessions.

Gillman is enjoying three fantastic weeks of golf. She reached the round of 16 at the 2014 U.S. Girls’ Junior, where she notched 7-and-5 and 4-and-3 victories before falling to eventual champion Princess Mary Superal. She then won last week’s Junior PGA Championship by a runaway 11 strokes, shooting three rounds of 66 and setting a championship scoring record.

Those accomplishments have played directly into this week’s success at the Women’s Amateur.

“It helped me a lot about all the momentum and just the confidence I had in my game,” said Gillman, who rallied from a 4-down deficit in Friday’s 20-hole quarterfinal victory over Su-Hyun Oh.

Henderson would also become the 10th player to win both the U.S. Women’s Amateur and the Canadian Women’s Amateur, joining the likes of Dorothy Campbell, Alexa Stirling, Stewart Streit and Glenna Collett Vare.

The 2014 U.S. Women’s Amateur Championship consists of 36 holes of stroke play followed by six rounds of match play. The championship is scheduled to conclude with a 36-hole final at 8:30 a.m. EDT on Sunday.

The U.S. Women’s Amateur is one of 13 national championships conducted annually by the United States Golf Association, 10 of which are strictly for amateurs.

Results from the semifinal round of match play at the 2014 U.S. Women’s Amateur Championship, being conducted at the 6,297-yard, par-70 Nassau Country Club: