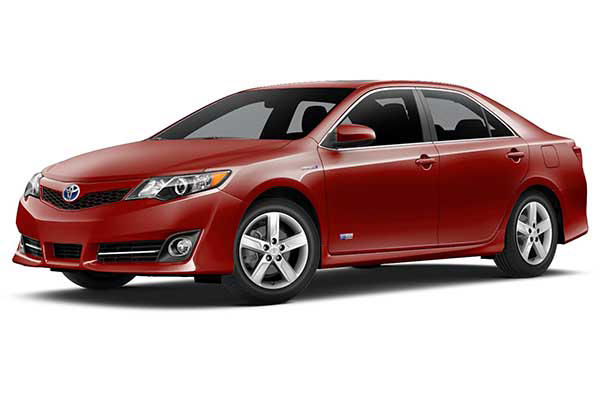 The Camry Hybrid is the #1 gas-electric vehicle in America despite getting an average of 10 or so miles per gallon less than the more-famous Prius. The Camry Hybrid deserves to be #1, though, because unlike the Prius, which never lets you forget you’re driving something sensible and therefore a yawn except when you orgasm over your great mileage, the Camry has style, speed and a healthy dose of cojones. It also manages to squeeze out something in the neighborhood of 40 miles per gallon. It’s a car, in other words, not mother’s milk.

Its inside is spacious and comfortable and responses are sharp and caffeinated, doing what you ask of it in a hurry. It doesn’t have a nav system as standard – wacky for a car in this price range – but its sound system is reasonably rich and you can find everything easily. If you want built-in nav, spring for the $1300 package and you’ll get an upgraded premium audio system, Bluetooth hook up and more. A 200-horsepower, 2.5 litre, 4-cylinder engine is surprisingly powerful given that this is a not-small 4-door sedan. Inside, it’s respectably tight and free of immediately noticeable cheapness, with brushed aluminum accents and a stitched dash. 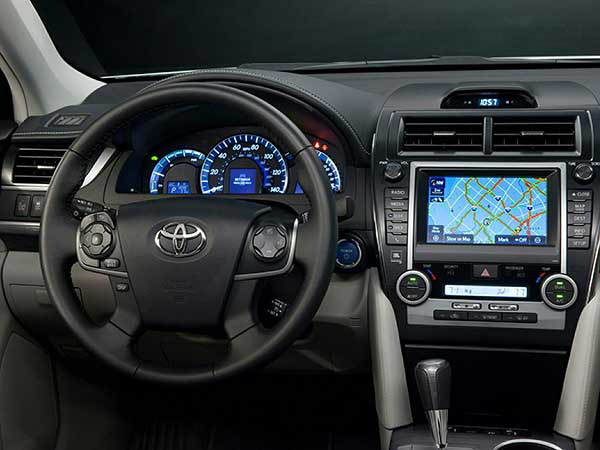 The car is offered in LE and more expensive, involved XLE trim levels. There’s also a “2014.5” Camry Hybrid which debuted in December of 2013 and is offered in an additional trim, SE Limited Edition, which differs in its equipment levels but not by much. The 2014 LE features 16-inch steel wheels, automatic headlights, keyless ignition/entry, dual-zone automatic climate control, full power accessories, cruise control, a tilt-and-telescoping steering wheel, a trip computer, Bluetooth phone and audio connectivity, a 6.1-inch display and a six-speaker sound system with a CD player, an auxiliary input and a USB/iPod interface that works quickly and therefore well. Go for the XLE and you’ll get 17-inch alloy wheels, foglights, heated exterior mirrors, a leather-wrapped steering wheel, an eight-way power driver seat (with power lumbar), an auto-dimming rearview mirror and rear seat air vents.

The Camry, for its quirks, deservedly occupies its #1 sales spot. For practicality, economy and sport, you won’t find a better hybrid in this price range.