“It was all his fault,” the sisters said, pointing at their dad. Seated at the head of the table, the gray, mustached patriarch smirked at the accusation.

The question was, “how did your family get into sailing?” Fingers flew in the father’s direction as soon as the words escaped my lips. Glenn Schimdt seemed content to accept full responsibility for introducing the family to the sport that has dominated their lives, and which they themselves have ruled on the South Shore for decades.

Long Island’s Great South Bay region has a long tradition of competitive sailing. The first yacht clubs in the area were founded at the turn of the century and the Great South Bay Yacht Racing Association, the governing body of sailing on the South Shore, was organized in 1906. The Schmidt family is ingrained in that history. At a young age, Glenn and Dianne Schmidt introduced the sport to their daughters, Gretchen Stang and Melodie Linekin, who both married men who sailed—or quickly learned the sport.

It was, in classic maritime tradition, a blustering, squally night as we sat around a table in the Bay Shore Yacht Club, sharing memories of sailing on the bay. 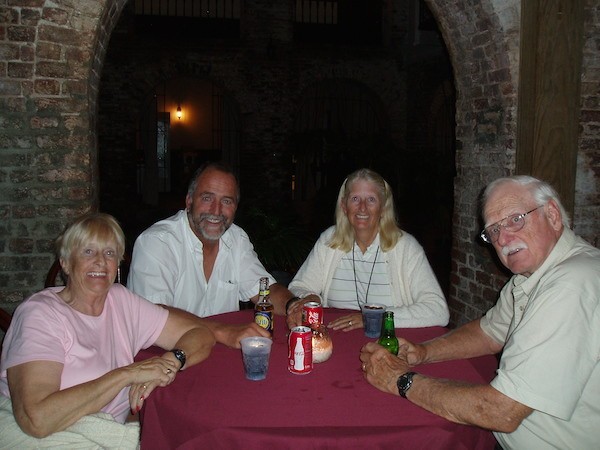 The family that sails together. Dianne, Mark, Gretchen and Glenn on vacation in Aruba.

“My first memory of sailing was being on a ‘tuck sailboat, getting tired, climbing up underneath the bow and falling asleep,” Gretchen recalled. “And then my parents tacked, and the water all slushed into my face. My mother thought I was drowning.”

Glenn bought his first sailboat in the sixth-grade with money he earned from his paper route. His family did not sail, but they joined the local yacht club in West Islip so Glenn could pursue his interest. Dianne grew up in upstate New York and never sailed until she married Glenn. Now she is a respected skipper.

Dianne said that when their daughters came along sailing was not optional. The Schmidts were a sailing family, and the girls were going to grow up on the water despite some bouts of seasickness.

“No,” said Melodie, contesting her mother’s version of events. “We sailed because they hadn’t invented automatic bailers yet. Gretchen and I would sit on either side of the centerboard with buckets, and that was our intro to sailing. We bailed. That’s why they took us; I don’t think it was for the company.”

Despite their labor-intensive beginnings, the daughters both took to sailing and it became a huge part of their childhood. While most teenagers on Long Island were on the beach in the summer, Gretchen and Melodie were on the bay. 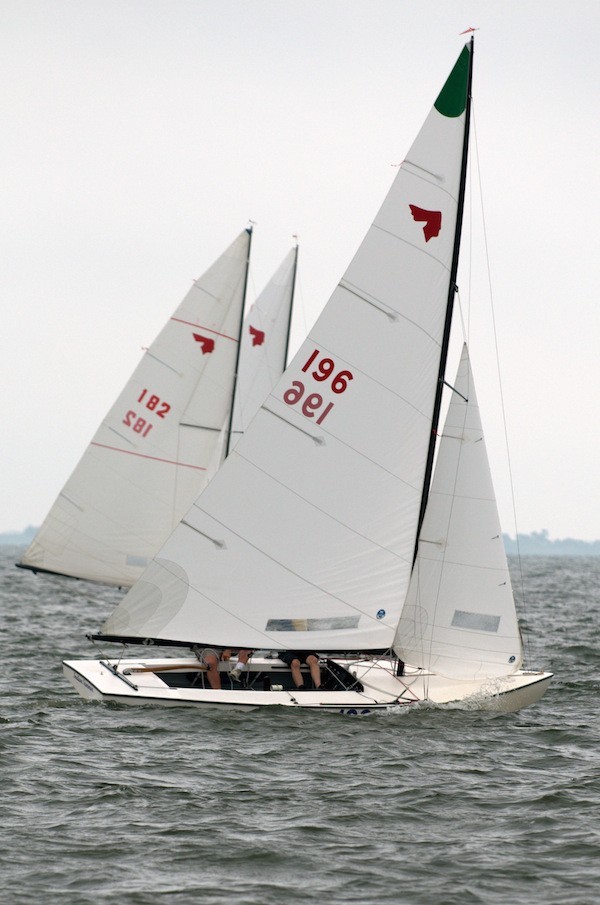 Glenn and Mark are shipbuilders specializing in Narrasketucks, the family’s boat of choice.
“We used to see the line of cars on the [Robert Moses] bridge, and we were down below them sailing around,” Melodie said. “We’d be out there for hours already having a blast.”

The women said that their mother always told them to “chase boys with boats.” Gretchen met her husband, Mark, sailing on the bay. He was an accomplished sailor in his own right, and they sailed the same class of boats—Narrasketucks. Melodie’s husband, Bob, claimed to be a sailor when they met, but the truth was quickly unearthed. Their first time sailing together, Gretchen yelled for the crew to get ready to turn, and Bob, not knowing that the lingo she used meant to duck, was clocked in the head when the boom—the metal pole that lines the bottom of the sail—swung across the boat.

Dianne outted Bob and said that while he and Melodie were dating, he was secretly sneaking off to sailing lessons. Luckily, the sport suited him. All of the men in the family, Glenn, Mark and Bob, are now past presidents of the GSBYRA.

“Anybody that comes near us gets sucked into sailing,” Melodie said. But when boyfriends became fiancées, the women said they knew better than to get married during sailing season. 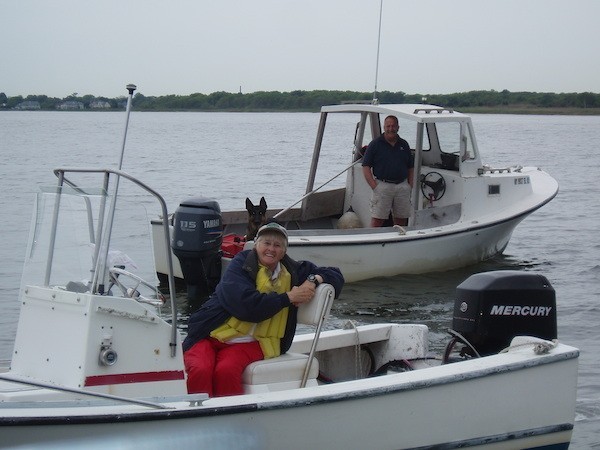 “My father was kind enough to inform us that if we got married in July or August, he would not be attending,” Melodie said. “He said, ‘You have 10 months to pick from. You don’t need to be a summer bride.’”

They were both married in the winter. During storms.

The family races Narrasketucks, which are characterized by their flat hulls. This type of construction makes the boat stable to move around on. One might think that the family would team up and pool their knowledge and skill to bring down the competition, but quite the opposite is true. Every family member races on a separate boat in the GSBYRA’s weekly Invitational Regattas. It’s wife versus husband, parent versus child when the family sets sail.

“When we get on the bay, it’s no longer family. It’s cutthroat,” Glenn said.

They all admit they are too argumentative to compete as a team. Glenn and Dianne attempted to compete together, but it was a short-lived experiment. “It was either separate boats or divorce, and the boat was cheaper,” Glenn said.

Though they say they don’t sail for the trophies, there are bragging rights that can’t be ignored.

“How you do over the weekend doesn’t matter, but you want to win the last race of the weekend, so you can stifle them during the week,” Mark said. “That last race you have to beat them.”

And out on the water, there’s no love lost between the couple that’s been married for 58 years. The worst collision they’ve seen was between their own boats. During a race, Dianne had the right-of-way coming around a mark, but when Glenn went to maneuver around her—at the last minute—the boat did not turn and he T-boned her.

“He hit my boat so bad,” Dianne recalled. “My mouth was bleeding, my head was bleeding. He demolished my boat. I said, ‘how did you hit me?’” The explanation was far from satisfactory: Glenn’s hiking stick—the rudder control—had gone up the leg of his shorts and become stuck so he couldn’t avoid ramming his own wife. But to make it up to her, Glenn said he spent all night fixing the boat and Dianne raced the very next day.

“Nobody ever really wants to think about their parents dying,” Melodie said. “But for me, the perfect situation would be for my parents to take each other out…and the last thing we would hear would be “dammit Di!” and that would be it. That’s like my fantasy way to for them to go, doing what they loved.”

The three women in the family have also been very involved with youth sailing programs all over the bay. Melodie, who taught at Bay Shore Yacht Club, earned her nickname “Opti Mel,” by spearheading an effort to bring a new youth boat, the Optimist, to the bay. It was no more that a bathtub-sized, single-sail craft. But because of its simplicity, instructors didn’t have to first teach kids all of the parts of the boat. They would just put them in and let them go. It let the kids build confidence and figure out for themselves how the boat worked, which the instructors could then build on to teach them proper technique.

“These little guys were buzzing around like you had stepped in a beehive,” Melodie said of one of the first Opti regattas she organized. “It was amazing. They could do this without knowing a single rule, they just had to be willing to put themselves out there.”

Melodie, Gretchen and Dianne also started the junior regatta series on the bay. Dianne believed that students couldn’t improve sailing only against their classmates. Her innovation allowed them to branch out and race against other juniors.

Gretchen said she was “hunted down” by the Unqua Corinthian Yacht Club in Amityville, and begged to take on their youth program. She finally acquiesced, and the program went from 4 kids to 79 on her first day when people found out that she had become the instructor.

Glenn and Mark don’t instruct; they are boatbuilders. Their company S&S Marine Enterprises has been building Narrasketucks for almost 40 years. Glenn said that in the 70s, the ‘tuck sailors on the bay wanted the boat made in fiberglass, but the builders they approached wouldn’t do it unless they could own and change the design. So Glenn and friend Dave Faber decided to do it themselves. Mark stepped in when Faber retired.

But the sailing culture on the Great South Bay is changing, the family said. Although they say the enrollment in youth sailing programs isn’t declining, kids specialize in other sports at a much younger age and with demanding, year-round practice schedules and scholarships on the line they can’t take the time to sail during the summer.

For those lucky families who do discover sailing, the sport usually becomes a lifelong love. You buy a boat once, and you have entertainment for years, Mark said, citing as an example that he and Gretchen sailed from Panama to Colombia on their last vacation. “Once you’re connected, it’s permanent,” he added. “This is forever.”