Famous names have long been linked with Long Island libraries. In 1874, poet and journalist William Cullen Bryant began building a reading room and lecture hall in Roslyn that led to today’s Bryant Library. In 1899, Theodore Roosevelt, then governor of New York, laid the cornerstone of a building on East Main Street in Oyster Bay that, remodeled and expanded, still stands as the community’s public library. In 1945, then General Dwight D. Eisenhower gave a boost to a proposed new Elmont Memorial Library by writing that it “will fill an important need for the returning servicemen.” In 2013, actor Alec Baldwin donated $1 million to the East Hampton Library to help complete a $6.5 million children’s addition to the neo-Elizabethan building originally constructed in 1912.

Though having celebrity attachments is generally not a goal of libraries, these famous names do point to the buildings’ long and rich histories, how they have been integral to local communities and how they continue to evolve and play an important role even now that the Internet has put much information at our fingertips. 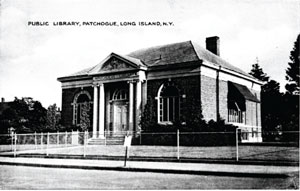 “In many ways, the library is the new town square,” said Kevin Verbesey, director of the Suffolk Cooperative Library System that includes 56 library systems. Increasingly, libraries offer meeting rooms for community groups, host concerts and other entertainment and provide computers and Internet access for job seekers and those who don’t have them at home. Cafés and other gathering spots, often with a coffee machine nearby, are becoming more common, too. “It’s no longer just about the four walls of the library,” Verbesey said. Students can reach out electronically or by phone for homework help and anyone with a library card can borrow an e-book from home or anywhere they travel.

More books than ever are being checked out, said Robert Dawson, author of The Public Library: A Photographic Essay, the culmination of 18 years of visiting libraries across the country. The last picture he took for his book shows a bright yellow bookmobile sporting the motto “Enrich your Life” parked in the Rockaways soon after Hurricane Sandy devastated the area in 2012.

Libraries not only bring books to the needy, they bring the past to the present. “The library becomes the repository for history, for civic memory,” Dawson said. And that is certainly true for Long Island, where many track both their community’s histories and their own. The Emma S. Clark Memorial Library in Setauket, founded in 1891, proudly proclaims itself “Suffolk County’s oldest public library in terms of continuous community service from its original location.” (Shelter Island’s first was created in 1885 and Northport had its first reading room in 1883, but these and other early incarnations didn’t stay in the same spot.) Meanwhile the Bryant Library in Roslyn, which dates its official founding to 1878, boasts of being “the oldest continuing library in Nassau County.”

The oldest tend to be in the oldest communities, often near a harbor or other body of water, as in the case of Setauket, said Ted Gutmann, director of the Clark. This library was named in memory of the beloved niece of Thomas Hodgkins, a philanthropist who made millions as a purveyor of candy. Hodgkins donated the property, building, fixtures and 1,500 books from his own collection to establish service to the Three Village Central School District. “We have only the one building. We don’t have a café,” Gutmann said. However, it has expanded and modernized over the years becoming a community center of sorts, especially after Hurricane Sandy when it regained Internet service and electricity before most residents.

“We had coffee set up, and people were talking and discussing. It was really a nice thing to see.”

But nailing down an exact chronology and individual branch ages isn’t easy. Some histories note “when library service began, not the dates the libraries were chartered by the State of New York,” said Jackie Thresher, director of the 54-member Nassau Library System. Myrna Sloam, the Bryant archivist, said that some older locations might have been discontinued. After the white-bearded Bryant died in 1878, his daughter gave his reading room building to the newly formed Bryant Circulating Library Association. In 1946, it was demolished to make way for the viaduct over Hempstead Harbor, and eventually moved to its present home in the Roslyn War Memorial Building. 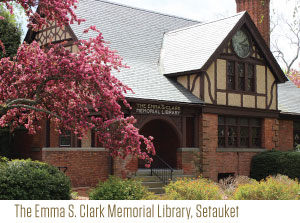 Beginning in 1899, the industrialist Andrew Carnegie gave a big boost to libraries around the country by awarding grants to build 1,681 new buildings. Rockville Centre, Northport and Patchogue each got one, and soon the Patchogue building will be re-commissioned after serving other uses and occasionally standing empty since 1980. “I think the community is delighted,” said Lauren Nichols, director of the Patchogue-Medford Library. “We will restore it to its 1908 splendor.” Within a year, she expects the building to reopen with books, videogames and community space geared mostly toward young people.

Though many benefactors were men, women and young people frequently had a hand in launching new libraries. “It seems to be a pattern. Men had the businesses and women had the leisure to open book clubs and libraries,” especially on the Gold Coast, said Elly Shodell, local history center director for the Port Washington Public Library, which started as a women’s book club in 1892. “It was the Gilded Age. Women who were wealthy reached out to help others with libraries.”

Young people have also played important roles. In 1891, two teenagers established Merrick’s first library in the hayloft of a stable with 50 donated books. In 1901, a 14-year-old boy in Bayville started lending books from a corner of his grandmother’s grocery store. In 1935, a student wrote an editorial in an Elmont community paper calling for volunteers to start a library and pretty soon they had a storefront staffed by students and teachers. In 1997, Girls Scouts in Glen Head started a drive that led to a Gold Coast Public Library District that opened its first building in 2005, Long Island’s newest.

Of course, it is more common for adults to do good turns for children. During a tour of East Hampton’s new extension, which opened this summer, director Dennis Fabiszak showed off the lighthouses that decorate one area, a windmill that stands in another spot and a boat-shaped desk for the librarians; older children have their own room. The new wing created a courtyard, which has been made into a “Secret Garden” filled with topiary animals. Almost every item on premises has “an educational spin,” he added. And books? Yes, the old-fashioned kind, printed on paper and bound between covers, are everywhere.

Recycling Libraries
Like old banks and firehouses, library buildings sometimes survive because they are put to alternate uses after being replaced. Northport’s Carnegie library building at 215 Main St, which served from 1915 to 1966, is now home to the Northport Historical Society. The Carnegie building at 11 Clinton Ave in Rockville Centre, which sheltered books from 1912 to 1962, has become a haven for law practices—some seven of them, according to Alene Scoblete, the library system’s archivist.

And then there is the Long Beach Public Library’s first site at 124 West Park Ave which opened in 1928 and lasted only 7 years before housing a string of bars and restaurants. About a dozen years ago, it became the Sutton Place Great American Bar and Grille, said owner Rob Richards. “We put in bookshelves and tried to keep the classic look on the outside. We tried to keep as much as possible.” They even added gold leaf to the original “Long Beach Public Library” concrete sign that still adorns the brick exterior. “It’s historical, so why not highlight it?” he said.
—Aileen Jacobson