Long Island’s East End was an artist’s haven long before it was a set piece for the Kardashians and the Parrish Museum honors this heritage by allowing creativity and a reverence for nature to intersect. The museum is currently featuring the work of American realist master William Glackens and 21st century experimentalist Maya Lin—two disparate artists whose works combine in some sort of curatorial bliss to give visitors to the Parrish a 360-degree view of our beautiful and mercurial Island.

This Glackens exhibit features over 70 of his works, many inspired by Long Island settings. Like the Lost Master (abstract expressionist Arthur Pinajian), Glackens found inspiration on the beaches and in the harbors and bays of the South Shore, particularly in Bellport.

Glackens’ work bridges the gap between his affection for the French impressionists and the influence of his American contemporaries in the Ashcan School. “Jetties at Bellport” (1916) features the thick paint, bright aeration and passionate brushstrokes of Renoir but hints at the more concise figurative painting of the artist’s American contemporary, John Sloan. Glackens seems to pull from both schools, but his departure lies in a preference for the cheerful and playful depiction of social gatherings, where Sloan was far more political, subversive and dark in his crowded, cranky depictions of urban strife at the turn of the 20th century. 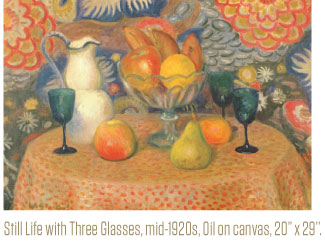 “Summer Day, Bellport, Long Island” (1913) is another impressionistic snapshot capturing a joie de vivre that defies the international chaos of World War I. In this poetic oil-on-canvas piece, a lone Irish setter prances along the water line as bathers enjoy the kaleidoscopic charms of the bay. Glackens touches the scene with soft use of the entire color wheel; wisps of brown marry seamlessly to pink, greens and reds swap sunlight in quick curly waves. If you’ve ever driven the Robert Moses Causeway as the sun sets to the west casting magic hour shards of orange, purple and turquoise across the shimmering, choppy surface of the water, that’s the moment that Glackens so passionately and accurately evokes.

While Glackens is clearly a landscapist, he’s a people person too, fond of crowd scenes full of soft figures in various stages of detail; he deftly puts a human face to the geographic place. The result is an impressionistic sense of carpe diem. And while the landscapes and the people may change slightly in Glackens’ creative muse as he moves from one beach and one pier to another, the summer sensuality that’s indigenous to Long Island life on the water does not.

21st century artist Maya Lin is Glackens’ dark counterpart. In a stroke of curatorial subversion of the best kind, the Parrish is showing her work at the same time. A century ago, Glackens was focused on the water and the joy people derived from it.

Today, Lin sees that same interconnectedness between man, machine and nature, using satellite imaging and computer renderings of topography as the foundation for sculptures that root us to the land and water because they are born of it. The world-renowned, Yale educated sculptor (who designed the Vietnam Veterans Memorial in Washington, DC) seems to enjoy working in threes. Her sculptures are extrapolations of the natural world—her approach evokes a sacred geometry blended with geography. One highlight of her installation are the three recycled silver sculptures “Accabonac Harbor” (2014), “Georgica Pond” (2014) and “Mecox Bay” (2014), each of which could be maps of mitochondria or sprawling celestial bodies of alien protoplasm. Only their titles ground them in a local reality. In their monochromatic glimmer, they appear as floating portals to other playas of consciousness. 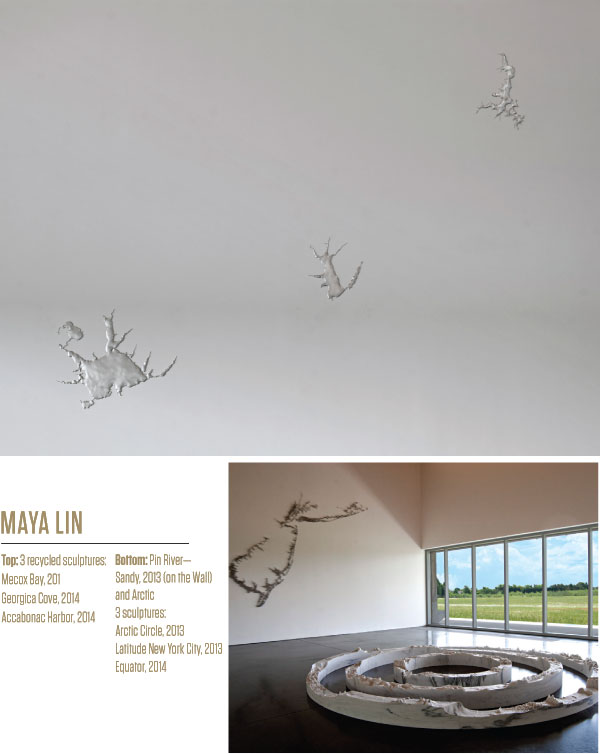 “Pin River—Sandy” (2013) offers another perspective on our Long Island lives. A 12-foot map of the Sandy floodplain made of pins offers some closure, playing to the truth that from all bad, something good can come. The Sandy experience left many indelible images. To see the topography of the storm represented in such an alternative way is by turns a revelation, an affirmation and a reconciliation. With her unique approach and intention, Lin has taken our base biological need and elevated it to the abstract. After all, we come from the water—perhaps these sculptures are just a glimpse of our God/source origins at work, unnerving and comforting all at once.

This macro-paradox of classic painting and cutting edge sculpture fuses effortlessly with the architecture and grounds of the Parrish itself. In its totality, the museum and the work within its walls may very well offer a working definition of Long Island and Long Islanders—we are sophisticated serfs, yeomen with style. We can be perfectly pressed in our summer whites, but look closely: There’s rich soil and thick paint under our nails and, of course, sand in our shoes.