The Miata occupies a well-deserved niche in the compact convertible department, holding its own in the face of challengers like the new Beetle, Honda S-2000, BMW’s Z4 and others. Enjoying non-stop sunny weather over a week’s test, my top was flopped constantly and I was in the zone, looking for any excuse to get behind the wheel and zip off somewhere. My top-of-the-line MX-5 Grand Touring included a retractable hardtop roof, keyless ignition, paddle shifters and other modern accoutrements, and the car comes in two other trims; the base Sport and the more expensive Club. A six-speed automatic transmission mated to a 158-horsepower, 2.0 litre, 4-cylinder engine making 170 horsepower moves the 2,500-pound car as fast as it can, which is to say Not Very. That’s due to my tester being automatic, though. With a manual you could make this thing moan, groan, patch and screech. I think. I hope. The 2016 model, coming our way in September, offers a turbocharger and will probably cause the model I tested to drop in price, so hold off on buying until then. There also isn’t, as everyone knows, much room in this thing. I plopped an 80-pound mastiff named Max into my passenger side and drove around the block just to see how he’d fare. He paced and turned and spat on the dashboard and looked at me as if to say, “Why don’t we try this again when we have a truck?” The advantages, of course, to having a tiny car include being able to zip in and out of sketchy highway situations at will, and parking is a snap. 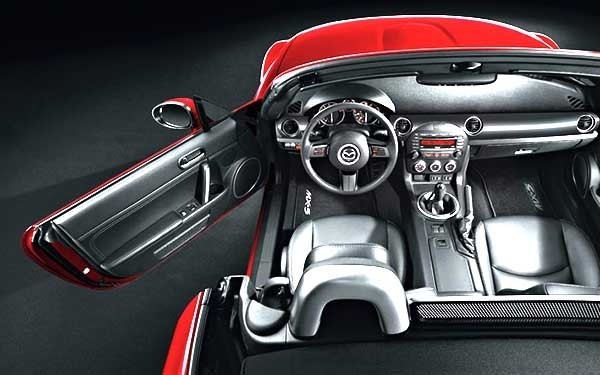 The biggest head-scratcher during my week’s test was the lack of a USB outlet anywhere in the car to both charge my phone and my iPod. Instead, I was offered a 1/8th inch jack, which sounded fine but anyone who buys this car will also have to buy a 1/8th inch cord and an adaptor to plug into the lighter outlet if they wish to power up their electronics. Do we need more little cords and adaptors in our lives, folks? I don’t. Which isn’t to say I didn’t love my little guy. I washed it three times, including the rims on its sweet 17-inch alloy tires, stylish cat’s-eye headlights, carved aluminum hood and hardtop which raises and lowers quickly so you get can get ‘er done at stop lights.

The Miata, according to all accounts, is coming into 2016 with an eye on more speed; let’s hope they bring the sound system up-to-date, too.