What To Know: An airy, wood-tabled gastropub chefed by Lia Fallon, formerly of Jedediah Hawkins Inn and the Riverhead Project, named with a colloquial term referring to the science of brewing. This is my type of laboratory: Beakers are used for glassware (three sizes are available) and surprisingly ideal for nose-based exploration, while the 24-draft menu resembles the periodic table. The latter features nothing boring, selections are from Mikkeller, Chimay, Moustache and others.

What To Drink: Terence Daly, also formerly of the Riverhead Project, is “brewmeister,” or chef de beer. He’s assembled a lineup with variety: Styles never appear simultaneously. “It pains me to walk into a place with six double IPAs on tap. It cannibalizes the lines, creates an imbalance and alienates a lot of people,” said Daly. “We have enough room here to explore everything.” This hodgepodge is discernable from my seat at the quartz-topped horseshoe bar (my server is wearing suspenders and Converse, both required): Rocky Point Artisan Brewers’ Hefeweizen, unfiltered and banana-y, pours alongside Dogfish Head’s Festina Peche, a peach-infused Berliner Weisse, Avery’s Ellie’ Brown Ale, which is malty and nutty and the stupidly hopped Coronado’s Idiot IPA.

Also: HaandBryggeriet’s Norwegian Wood is a gruit—a now-obscure style prevalent before the use of hops; instead, different herbs and spices were used for flavoring. This smoky interpretation features juniper berries.

What To Know: An interior revamp has added an L-shaped, marble-topped, 12-seat bar with 16 drafts to the Italian restaurant’s entrance (the new layout, which debuted in June, is nearly identical to the across-the-street Sapsuckers, a beer-dedicated gastropub owned by Osteria’s Nino Antuzzi and Kelley Danek). This lineup is occupied primarily by wines—unsurprisingly, as vino was/is the predominant alcohol at Osteria—but a quartet of taps are dedicated to Italian beer. These showcase the country’s burgeoning and experimental scene, seldom represented on Long Island.

Also: The menu of bottles, roughly 20, is predominantly Italian. Montegioco’s Quarta Runa is a tart, oak-aged, Belgian-style ale brewed with peaches from the town of Volpedo. 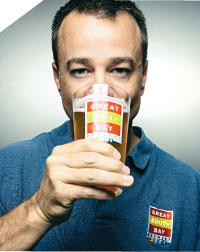 Rick Sobotka is an anesthesiologist for his day job, but only flights and pints of 14 drafts are prescribed at his 40,000-square-foot brewery on Drexel Drive. The beer/meds include the bold, earthy and chocolaty Dirty Deeds Russian Imperial Stout, the citrusy Blood Orange Pale Ale and Niko Weisse, a Greek-inspired Berliner Weisse with cucumbers. (The latter is a collaboration with, uh, me.) Another incentive to visit, aside from a game of cornhole, is Great South Bay’s Pro-Am, a monthly taproom-only series of collaborations with homebrewers from the Long Island Beer & Malt Enthusiasts. These are smaller, experimental releases (e.g., an IPA with basil and rye) produced with the brewery’s original one-barrel brewhouse.