The members of the indie-pop quintet Mr. Twin Sister know that three years is a long time between albums. Folks like Sting, Billy Joel and even Tool can get away with those kinds of shenanigans and know that their fan base will still be there to support them. But for an indie-rock band, even one as highly acclaimed as Mr. Twin Sister, three years might as well be three decades. Those critics, bloggers and listeners that were initially impressed? They’ve likely moved on. After all, if a band is dubbed the next big thing, they only have a limited amount of time to back up their, um, bigness.

Still, ask any of the members of this Long Island band what took so long and one might get a look that says, “Really? Where do we even start?”

“Well, we did get into a really bad accident,” said singer Andrea Estella. “I mean… I’m just happy we’re alive.”

The accident Estella referred to happened in early 2013 when one of the members lost control of the band’s van and crashed into a tree. Bassist Gabe D’Amico shattered his wrist, Estella broke her leg and none of the other members walked away unscathed. It set the band back for months.

“I still have trouble sitting in a car. I have some anxiety now,” said Estella, who added that she still has shooting pains in her leg when she walks.

Then there was the issue with their name. See, they used to be called just Twin Sister. The step up in formality was not taken by choice and while they were initially reluctant to talk about it, guitarist Eric Cardona convinced Estella to spill the beans.

“Just legal reasons,” said Estella. “We had been getting these threatening emails from a band in Pennsylvania since 2010. The back-up band was called Twin Sister. Then, when we started getting a lot of attention, they went out and bought the copyright. Whatever. I like our new name. It’s a little more formal, a little more grown-up and it rhymes too.”

Oh, and there were issues with their label, London-based Domino Records. Estella offered a simple “it didn’t work out,” but it is undeniable that disconnecting with the company that broke The Arctic Monkeys, Animal Collective and Franz Ferdinand was a setback. 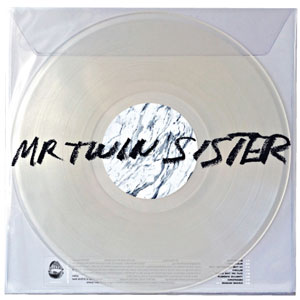 These misfortunes would have broken a lesser band, but Mr. Twin Sister took it all in stride. With a new album out this month, simply titled Mr. Twin Sister and released on their own Twin Group label, the band hopes to pick up where they left off after the release of their 2011 debut, In Heaven. Adding to their excitement is the fact that they view this record as a testament to their sticking together through all the troubles.

“We definitely challenge each other,” said Cardona. “When we first started, we all had our own individual tastes and projects, but we have a very strong bond together.”

For the members of what would eventually become Mr. Twin Sister, that bond started when most of them were still in high school. While Estella and Cardona were already playing acoustic songs together, bassist D’Amico, keyboardist Dev Gupta and drummer Bryan Ujueta, were all playing in other bands around the region. Getting together proved difficult at times with the members spread out over Nassau and Suffolk, but they bypassed this by recording material and sharing it via email.

Eventually they compiled enough songs to release an EP in 2008 (Vampires With Dreaming Kids) and another in 2010 (Color Your Life), both of which received lots of love from the blogosphere and prominent websites. The full-length debut, In Heaven, was also acclaimed—fans and critics compared their sound to artists like Stereolab, Young Marble Giants and even Björk. Even now, it’s hard to pinpoint a genre for Mr. Twin Sister. Lounge-pop? Indie-R&B? Chill-wave? One could even sneak in allusions to disco. Estella also has no qualms about a classification that some would consider negative: “I like easy-listening,” she owned. “I know we’re not that, but I like the name anyway. I just say pop. ”

It’s certainly refreshing to hear a singer unafraid of descriptors like “pop” and “easy listening” when most bands battle to escape those titles. Still, Estella acknowledged that it doesn’t fully sum up the band’s sound. Moreover, just as stylistically varied as In Heaven was at the time, the new album is just as unique and diverse, even at a brief 8 songs over 38 minutes.

“We’re just trying stuff out and dipping our pens in a lot of different ink when it comes to sounds,” said Cardona. “We love so many kinds of music and we love to play with different set ups. It all falls under the same kind of roof musically, but there are a lot of surprises on the album.”

He’s right. From the atmospheric trip-hop sound of the album opener, “Sensitive,” to the foreboding electro thump of the single “Out of the Dark” and climaxing with the Mazzy Star-channeling ballad “Crime Scene,” the band seems to be fully formed and secure with doing the unexpected. After all they’ve been through, they’re just happy to be playing together.

“We’re working on another album right now,” Cardona said. “There’s a lot left. The next batch is already up. We just have to give it one more push. No more three-year gaps. We don’t know what the future holds for us, but we hope that this time we can keep it up.”