Gunner, an 80-pound black Labrador retriever, proved himself a true guide dog just four days after meeting his partner. As they slept in a cozy Smithtown dorm room on a cool April night last year, Gunner sensed trouble. He ran over to his new charge, who was lost in a nightmare, and set his reassuring paws on the man’s chest. Gunner nuzzled his buddy’s rib cage and whimpered faintly until the man opened his eyes. 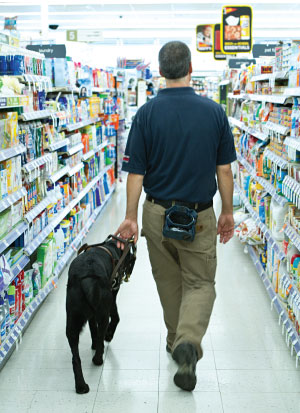 Prodded suddenly awake, Brian Pearce lay gasping in the dark on a small bed crowded by Gunner huddling up against him. In his turbulent sleep, Pearce had been reliving the moment he nearly died seven years earlier while on a tour of duty in Iraq. He’d had the nightmare countless times since then, always trembling in his slumber and awaking alarmed. But this night was different: Gunner was there and he had performed his first successful nightmare interruption.

“He picked up on what he needed to do right off the bat,” said Pearce, an Army veteran who lives with his wife and two children in Virginia. Gunner’s conduct caught Pearce by surprise, but it was a prime example of the work achieved by the Guide Dog Foundation. The Smithtown-based nonprofit has spent seven decades pairing the blind with highly trained dogs—mostly Labs and golden retrievers—using time-tested criteria such as need, lifestyle, pace and personality.

Pearce lost his vision in 2006 when an improvised explosive device (IED) hit his Humvee 18 miles north of Baghdad. He also sustained a traumatic brain injury and continues to suffer the ravages of Posttraumatic Stress Disorder (PTSD). Foundation staff recognized his need for more than a guide dog and matched him with Gunner, who had also received training from GDF’s sister organization specializing in raising service dogs, America’s VetDogs.

The story of Pearce and Gunner is one of about 150 similar tales that emerge annually from the two organizations that operate almost entirely on donations and spend more than $10 million a year uniting those in need with four-legged companions. “Our mission is to improve the quality of people’s lives,” Chief Executive Officer Wells Jones said. As CEO, he oversees a network of 100 employees and more than 1,500 volunteers located in hubs throughout the East Coast. “This is the type of organization where the whole village is involved,” said Deana Izzo, a long-time GDF trainer and field representative based in Georgia.

Guide dog programs begin even before birth, when breeders—stationed at the foundation’s Smithtown campus—handpick mating pairs to produce the highest quality offspring. Then carefully vetted volunteer puppy raisers, including prison inmates in eight state correctional institutions, foster individual puppies, housebreaking and socializing them for about 12 months.

“They never cease to amaze me,” puppy raiser Susan Semple said while keeping close watch over Max, the rambunctious 11-week-old yellow Lab she’s raising. “Every day is a new adventure.”

Max is the ninth puppy Semple has raised in her Huntington home in the last eight years and she’s never had a single regret. “People always wonder about that parting moment,” she said. “It’s why people don’t want to raise puppies. But it’s highly overrated as far as being a hard moment. By not being ready for it, you miss a year to fourteen months of pure joy.”

After leaving their foster homes, the puppies return to campus for four to six months of training in their respective fields. Guide dogs learn to lead and orient the visually impaired around obstacles, through crowds and elsewhere. Service dogs are taught to retrieve items, provide balance, respond to seizures and nightmares and assist with physical and psychological rehabilitation. All dogs, including those who end up working as nursing-home pets or law enforcement and military dogs, learn intelligent disobedience and unique evaluation skills. It’s what keeps them flexible and better able to mitigate specific disabilities.

“Exposure to the outside world is critical,” said Izzo. And that’s where the bulk of the training is done: At train stations, in busy residential areas, inside dining establishments and even on airplanes. “Dogs have to be well-socialized to be able to properly assess a situation. We make it as positive as we can for the high-stress environment it can be.”

The dogs are kenneled in Smithtown during their training and up until they’re matched with a recipient, but even then, they’re kept company. Kennel volunteers visit with the dogs daily, feeding and grooming them and cleaning their living quarters. Some also spend up to two hours a visit walking and playing with the dogs.

“They have to know the warmth of a human being,” said Jeannette LaRock. She and her retired husband, Dennis, have been puppy raisers for the better part of a decade and began volunteering at the kennel three years ago. Living nearby, they make regular trips to the campus. “You can’t walk away,” she said. “It sucks you in.” LaRock is proud of their part in improving the lives of those in need. She shed tears reminiscing about a recent encounter with Vinny Boo, a puppy she raised. He looked regal and resolute walking alongside his new handler, an amputee, a gratifying moment for LaRock personally. 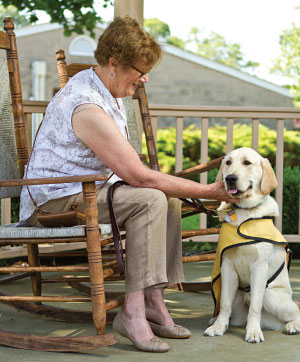 But getting there is no easy task. Although the dogs receive casual training early on and official training with the foundations’ 30 instructors (16 for GDF, 5 for VetDogs and 9 traveling field reps like Izzo), the real work doesn’t begin until they’re partnered up. Recipients are invited to stay on campus—or flown in if they live far away—for team training free of charge. They’re given private rooms, served meals cooked by an on-site chef and catered to individually for the duration of their 12-day training program.

The recipients meet their dogs and begin a bonding process that fosters a successful working team. They rehearse basic obedience, recite commands, participate in grooming sessions and practice crossing streets. They learn each other’s abilities, manners and styles; develop a solid rapport and gain an acute understanding of one another.

It took Beaudrie and her three-year-old black Lab, Jillian, some time to develop trust. They hit challenges early on, but Beaudrie decided to use GDF’s aftercare option to bring the dog’s original trainer to their home.

Once Beaudrie and Jillian overcame their barriers, life together flowed comfortably. “I was very well-matched with Jillian,” Beaudrie said. At the sound of her name, Jillian dropped her neon green football under the kitchen table and bounded toward Beaudrie. “She has an outgoing personality, she’s easy to work with. At home she’s just an ordinary dog, but she’s all business as soon as the harness is on.”

Grateful for her good fortune, Beaudrie jumped at the opportunity to give back. She joined GDF’s alumni council, conducting research and developing literature for projects aimed at offering disabled individuals more amenities in public places. “GDF gave me back my sense of pride, my sense of independence,” she said. “Now I’m trying to help make life easier for the grads.”

Pearce is also spreading awareness of the life-altering potential of GDF and America’s VetDogs. He speaks publicly about the groups, sharing his own story to encourage veterans in need to seek assistance. Pearce returned from Iraq devastated. He’d spent two months in a coma and endured numerous medical issues. He had to retire from his 17-year military career and relearn basic skills. He experienced flashbacks of the day when he was sitting atop a Humvee, gripping a machine gun and surveying the road when an IED exploded and changed his life forever.

Since he teamed up with Gunner, the nightmares have subsided. “If I told you I didn’t have dark days, I’d be lying,” he said. But things are better. “Having a dog gives you purpose. And when you’re feeling the worst about things, that dog will come to you. All he cares about is you. It makes things 100 percent better.”

Pact Mentality
A veteran and his dog form a lifetime bond

Up until February, Joseph Gormley was depressed and living a life of isolation in his Floral Park home. Retired, single, hearing impaired and suffering from Post Traumatic Stress Disorder, the 67-year-old leg amputee was fed up. He took his therapist’s advice and reached out to America’s VetDogs.

Gormley spent 12 days at the Smithtown campus getting to know London, a 2-year-old yellow Labrador retriever whose attentive brown eyes and gentle demeanor captivated him and melted some 40 years of pain from his heart.

It didn’t take long for the pair to adjust to life together, even though there were some big changes. Gormley was shy and soft-spoken, but London was friendly and forward. Where he liked to observe, she liked to approach. She brought him out of his shell and he helped her mellow. Socialization became a part of Gormley’s life, whether he liked it or not.

London was trained primarily to alert and orient her hearing-impaired partner to car horns, doorbells, smoke alarms and telephones. As a service dog, she was also taught to retrieve items—including Gormley’s prosthetic leg—open doors, turn light switches on and off and provide balance. But her greatest ability, according to Gormley, is recognizing when her handler is in need of affection.

Drafted into the army at 20, Gormley became a helicopter machine gunner and was sent to combat in Vietnam. He returned a couple of years later, crushed and carrying emotional baggage that would burden him for the next four decades. Gormley bore the burden quietly: He married and raised three children, worked as an electrician and spent his free time as a volunteer firefighter.

But Gormley was suffering from PTSD and combat stress, though he didn’t know it until a routine trip to the Northport Veterans Affairs Medical Center. “I went for hearing aids,” Gormley said, “and ended up having a reaction when I saw guys wearing different unit patches. I had a flashback, broke down and started crying.”

That breakthrough started Gormley on his three-year journey to recovery. He underwent a 90-day inpatient PTSD program at Northport and now attends group therapy there. London accompanies him on all of his trips.

“It’s good therapy for other people,” Gormley said. “People are depressed, they see an animal, it changes their attitude completely.”

Adorned in her black and beige harness, London garners attention wherever she and Gormley go—for a stroll around the block, an outing at the dog run or a long walk through nearby Alley Pond Park. “There’s times I’m up and out at five in the morning with her. This young lady loves the water and rolling in it, mud puddles and all,” Gormley said. “She’s had more baths…my friends laugh. They say, ‘Who’s taking care of who?’”