The circuitous Connecticut Art Trail leads to 17 art-centric venues like world-class art museums, studios, house museums and estates, all easily accessible from the area’s bridges and ferries. This itinerary—from Greenwich, along the New York border, up and east to the Cross Sound Ferry terminal in New London—focuses on venues within an hour’s drive from one another and can be adapted for a day-trip, an overnighter or a longer stay.

Greenwich, on Connecticut’s Gold Coast, is rich with galleries, antique dealers and the remarkable Bruce Museum of Arts and Science, making it a sophisticated first stop. Here, there’s a sculpture by Auguste Rodin and paintings signed by Childe Hassam, Emil Carlsen and Leonard and Mina Fonda Ochtman—all associated with the Cos Cob Art Colony. 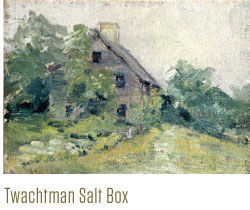 In the 1890s, the Colony painted en plein air at the Bush-Holley Historic Site (c. 1730), just a few miles from the Bruce. Today, its American Impressionist collection and restored grounds and gardens make it easy to imagine Hassam and John Henry Twachtman teaching there.

The route to the 153-acre Weir Farm National Historic Site, about 30 miles north of Cos Cob, nears the Center for Contemporary Printmaking in Norwalk, where works are on view in the 19th century stone carriage house. Julian (aka J.) Alden Weir, the Father of American Impressionists, purchased the farm in 1882 and he and his colleagues—Twachtman, Hassam, Theodore Robinson, Willard Metcalf plus Albert Pinkham Ryder and John Singer Sargent—painted their best work there over the next 37 years. Indoors, bucolic landscapes are on display within the fully restored and historically furnished house. Outdoors, the 60-acre park looks just as it did originally. For those who find the urge to create their own works, complimentary art supplies are provided. In nearby Ridgefield, the Aldrich Contemporary Art Museum delights enthusiasts of cutting-edge art with changing exhibits by emerging and mid-career artists. (The famous Sultana Salt Caves are also just two miles from the town center.)

From Ridgefield, it’s a 30-mile drive northeast, mostly along Route 202 in the unspoiled Litchfield Hills, to storybook Washington. The picturesque road passes The Silo, home to an art gallery, shop and cooking school; in town, the Washington Art Association’s gallery has a varied rotation of exhibits. Woodbury, “the antiques capital of Connecticut” is just 10-miles further and a must-stop destination for collectors of authentic 18th and 19th century American Federal antiques.

It takes an hour from New Haven to Farmington’s Hill-Stead, where masterpieces by French Impressionists include works by Cassatt, Degas, Manet, Monet and Whistler displayed in a gracious mansion overlooking a sweeping lawn. Ten miles east, in Hartford, there are old masters at the Wadsworth Atheneum Museum (Trumbull Kitchen is a perfect lunch stop) and 20th century American works at the Art Gallery at the University of St. Joseph. En route to New London, the Florence Griswold Museum—a former boarding house in Old Lyme—displays American Impressionists just 13 miles from the ferry. 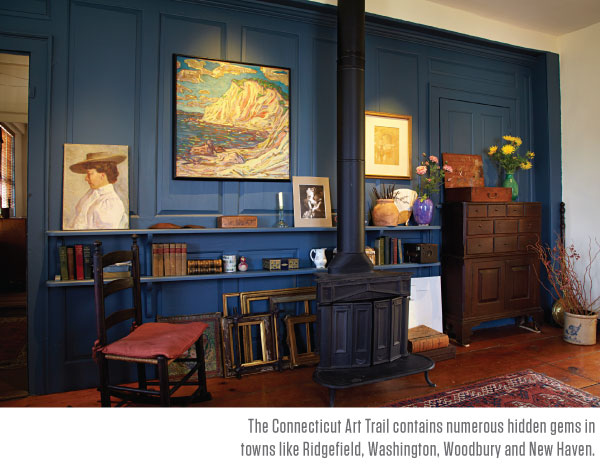 STAY AND DINE
Delamar Hotel
In Greenwich, the contemporary waterfront Delamar Hotel near the Bruce Museum boasts marina views from the Lounge and l’escale restaurants. delamargreenwich.com