Michael Brown, the 18-year-old black man killed by a white police officer on Aug. 9, was laid to rest today. In advance of his funeral, his family called for calm.

“Tomorrow, all I want is peace while my son is being laid to rest,” Michael Brown Sr., said Sunday night.

While the shooting of Brown by police officer Darren Wilson sparked two weeks of violence and looting in the St. Louis suburb of Ferguson, the Associated Press reported demonstrations have become quieter. The unrest, however, overshadows some of the central issues that impact the entire nation.

Ferguson is far from alone in being a suburb still deeply segregated. A study by Brown University found that while segregation peaked between 1960 and 1970, segregation in suburbs around big cities remains high. New York City comes in third in terms of cities the study found to still be deeply segregated. Detroit and Milwaukee tied for first, followed by New York, Newark, Chicago, Philadelphia, Miami, Cleveland and St. Louis. The study indicates that while in cities blacks have gained political power in the suburbs and counties that surround those cities political power still largely remains in the hands of whites. 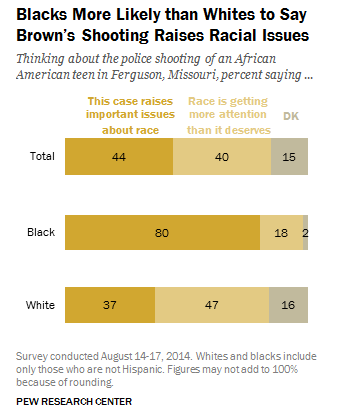 The national reaction to the police shooting also shows a country still very much divided. The Pew Research Center conducted a survey of 1,000 adults between Aug. 14-17: 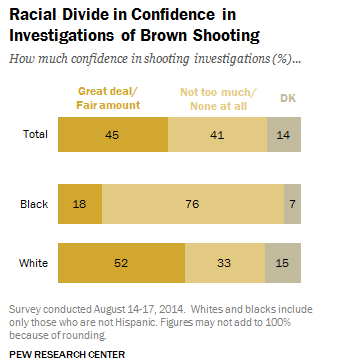 St. Louis Nine Network presented an evening of programs focused on what happens next in St. Louis and the country after Ferguson. Do you think the shooting of Brown raises important issues that require discussion? Why or Why not?