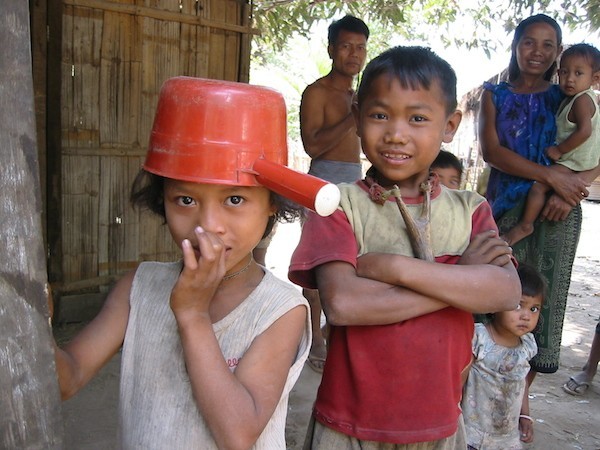 I’m sitting outside on a mini stool in northern Cambodia where my bent knees don’t fit under the table. A three-course meal arrives from the nearby food stall—a hard-boiled egg served as a delicacy with three additional finger bowls presenting spices, limes, and mint. Egg vendor #7, Chantheaea, giggles when she returns with a tiny long-handle spoon. Meanwhile, I watch two guys, Narit and Ponlok, shoot it out on a makeshift outdoor pool table. This jungle-encased village, Cheabb, probably won’t see electricity in the lifetime of these two pool sharks. Cambodia’s capital city, Phnom Penh, has just built its first shopping mall with an escalator that has become an instant tourist attraction. I realize later that Chantheaea was chuckling about my inside-out T-shirt. I haven’t passed a mirror in weeks.

I’ve flown 15,000 miles by plane, over-nighted on a bench of a chugging riverboat, spent a day in the dusty cab of a puny Japanese pickup crammed with 10 riders, and then 10 hours on a wobbling motorbike sputtering on rutted, meandering jungle trails. The trail, barely worthy of foot traffic, frequently requires crossing rivers on slimy log bridges. It becomes impassable during the wet season.

My brother Basil and I were repeatedly warned not to venture into this isolated region that’s supposedly rife with landmines and holdups by teams of bandits. However, our reward for forging ahead was a spontaneous night that fused a wedding and a bizarre theater odyssey. The first thing we saw in Cheabb was a mobile PA system announcing what later turned out to be a play. The PA system involved two guys on a motorbike rigged with a large horn on the handlebars connected to an amplifier sitting in the drivers lap. The rear passenger held a mike to a Walkman that made the announcements.

In this off-the-grid destination, the wooden box houses are raised on six-foot stilts. In the shade below, black buffalo, pigs, and chickens reside. The people, mostly rice farmers, steal naps in hammocks slung between stilts under the houses or between the trees. Everyone we pass waves hello. My hunch is that once war-ravaged, perpetually destitute Cambodia had a lighter side, and I wasn’t quitting until we found it. Landmines, civil war, and genocide dominate many associations with Cambodia, but life has returned to a new version of normal, even in Preah Vihear Province, one of the poorest and most isolated.

There’s no way for an outsider to know they’re crossing between the neighboring villages of Cheabb Lech and Cheabb Kart (Cheabb east and west). But that’s where we were invited into the soul of this village with zero tourism. In one magical night, we attended a wedding reception, which later segued into an outdoor theater performance, and then slept on the top cop’s porch.

The wedding highlights included proud toasts ladled from a 35-gallon jug of homemade milky-fermented booze, dancing to insanely loud Cambodian pop, eating bugs, and listening to the best man speech in which he noted that the bride’s premiere hobby was jumping rope. The groom, dressed in a frumpy, oversized suit, couldn’t stop snickering during the should-be solemn slow dances. Our go-to-guy, the only one in town who could speak English, told us about the local pothead, a little girl who wears a red cooking pot as a hat.

After the wedding reception, the group marched across town to join 200 people already seated on the ground before a stage that was amplified by a lone microphone hanging from a wire. The wooden stage set was draped in billowing, silky tarps. The performance, hours and hours of short bits, were punctuated by the manual closing of a dainty pink curtain. A flash photo (Basil’s) started a tizzy that startled the entire audience and made actors modify their act and speak in even higher pitched voices.

Where there are no televisions, traveling troupes are still the stars. Within the crowd, several campfires were maintained to combat the 70-degree winter chill. At one point during the six-hour Khmer epic play, half of the audience suddenly stood up and gasped—a reverse domino effect that didn’t seem like a standing ovation. It wasn’t. A six-foot-long heat-seeking venomous snake had crawled into the audience. Once the snake was hacked in half by someone who happened to have a machete handy, the show resumed. Basil suggested that the snake’s demise might be a metaphor for what happens here when someone threatens married life.

After the marathon performance, we feasted with the wedding gang, but passed on the cow stomach and dried blood patties that resembled black tofu cakes. After waking up on the hospitable police chief’s front porch, we visited several schools, all raised 12×12-foot platforms either under a home or outside covered by tarps. The blackboards were black paint on flat boards and the instructional guides were laminated posters, one for math and one for language. After Basil donated hordes of pens and notebooks to these makeshift schools, he also stepped in as interim teacher, which routinely inspired more laughter than learning.

Despite the forewarnings about landmines and holdups, we ventured to Cheabb where the people, like most Cambodians, exemplify warmth, grace, and pride, which is incredible when considering the unspeakable horrors many of them have endured in their lifetime. In these more prosperous times, some still manage to survive on one dollar and 1,000 calories per day. The Khmer capacity to overcome extreme adversity and still welcome unannounced travelers with smiles and respect is humanity. Being the first foreigners to visit a place where they’ve never seen any is a traveler’s cliché—but when you unearth the last remnants of virgin turf in Southeast Asia, dignity and joy is what you’ll find.

As my brother and I prepared to roll out of Cheabb, we enjoyed a final hard-boiled egg at the food stall. The newly married couple rode past and waved to us and all of the food stall workers. They were honeymoon bound—a visit to the other side of the village—which made the staff cheer wildly. That’s when it dawned on us that the bride was #7, our previous egg vendor, Chantheaea. 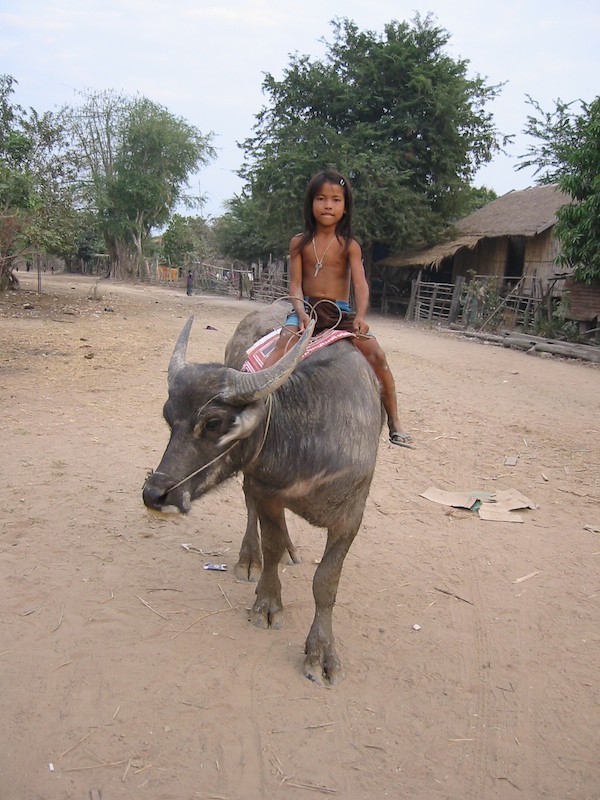