When asked about his favorite live performance of 2013, The Roots’ Questlove said it was a three-way tie between Prince, Beyoncé and New Yorked-based jazz pianist Jon Batiste. Twenty-seven-year-old Batiste is a skilled, charismatic bandleader and vocalist along the lines of 20s jazz great Jelly Roll Morton. And while his music is rooted in jazz, he creates his own style by incorporating elements of pop, gospel, classical and r&b.

Growing up in Kenner, Louisiana, Batiste was surrounded by music from a young age. The prodigy played percussion in the Batiste Brothers Band at age 8, transitioned to classical piano at 12 and released his first album, Times in New Orleans, at 17. Being one of the largest musical families in New Orleans, the Batistes were an inspiration for the HBO drama series Treme, in which Jon appeared as himself. 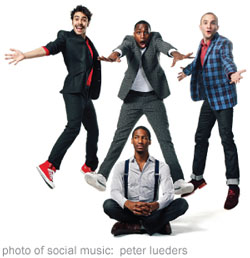 “The beauty of being on the New Orleans music scene from a very young age is that you learn how to play so many styles,” said Batiste, who began focusing on writing in his mid-teens. “I played everything from video game music to Latin salsa, hip-hop and jazz.”

Batiste arrived in New York City in 2004 to attend The Juilliard School where he met the members of his band Stay Human: Saxophonist Eddie Barbash, drummer Joe Saylor and Ibanda Ruhumbika on tuba. During this time he also toured the world with many of his mentors including Wynton Marsalis, Lenny Kravitz and Prince. “That was inspiring for me,” said Batiste. “I learned a lot from watching Prince move around the room and seeing how he communicates with others.”

Stay Human has no shortage of ways to communicate with its audience today. In trying to bring live, jazz-based music to millennials and others who wouldn’t experience it otherwise, the group began playing free concerts on subways and street corners. This involved temporarily swapping Batiste’s grand piano for the portable melodica (or, as he calls it, “harmonaboard”) so that he could play anywhere. Taking jazz out of the context of the stuffy club setting and making it more engaging and accessible to the masses resulted in a strong fan base of people under 40. But the music appeals to everyone from young children to jazz aficionados, who were standing on their seats when the quartet played Carnegie Hall in October of 2013.

Using social media to connect with fans, Batiste sometimes announces spontaneous performances in unusual places around the world—from the ski slopes in Utah to a Long Island beach or a desert in the Middle East. The band’s infectious energy leads numerous people to join its signature marching ensemble, creating a nonviolent “love riot.” One of the most impactful ones took place on the Lower East Side of New York City when 5 people turned into 300. Cops arrived on horseback to break up the pandemonium as the band marched. 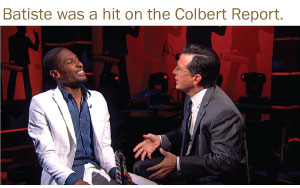 “I think the love riot is an entrée into a deeper understanding of music,” noted Batiste. “When people experience a love riot, it’s my way of lighting a spark within them that makes them look at this music in a new way, which can further be developed when they come to our live show or explore the sounds they heard on their own time.”

On a recent episode of The Colbert Report (after which the band’s album went to the top of the Billboard Heatseekers chart) the collective took its uplifting music to the street, with Colbert and the studio audience dancing in tow. When Colbert asked Batiste why he called his record Social Music, Batiste said his music is social because “it’s meant to be shared, you can dance to it, cry to it, laugh to it.” The 12-track album contains elements of New Orleans jazz, neo-soul, blues, rock and gospel blended into traditional Mardi Gras Indian sounds, demonstrating music’s ability to bring different cultures and generations together. The sounds of Stay Human performing in the subway can be heard on the jazz standard “Naima’s Love Song,” a synth heavy instrumental reminiscent of 70s soul and fusion.

“A lot of songs come from improvisation and then I feel the lyrics,” said Batiste. “Social music is music that reflects the human condition. I’m all about drawing from the human experience and making it manifest itself through music.”

As the artistic director-at-large of the National Jazz Museum in Harlem, Batiste is also concerned about arts and music education cuts in schools. When visiting schools and community centers, Jon Batiste and Stay Human show people how to engage with the arts to make their lives better. In a tech-centric era, Batiste believes there should be more emphasis on the power of human exchange through live music because it can transform the world.

Jon Batiste and Stay Human will play a daytime show to benefit the Visiting Nurse Service on Nov 9 at John W Engeman Theater in Northport. They are also playing Nov 8 at the Apollo Music Café.