On film Robert Davi’s been a bad guy, good guy, tough guy and a softie. In addition to acting, he’s been successful at screenwriting and directing. But his latest endeavor, and his current passion, is singing.

Davi has appeared in blockbusters like The Goonies, Die Hard, License To Kill and his successful late 90s TV series, Profiler. His latest film, Expendables 3, was released in the summer. But while Davi is staying busy as an actor, he’s also turning his attention more and more to music. His show, Davi Sings Sinatra, is playing around the world and will make a stop in New York next month at Huntington’s Paramount.

Born in Queens, Davi’s family moved to Dix Hills when he was five. His theatrical talents first became apparent in fourth grade when he was cast in the play George Washington Slept Here. “I played Sam, the black butler,” Davi recalled. “When the play ended my teacher walked my parents out to the parking lot and told them, ‘You should encourage him in the arts.’”

Davi’s parents were supportive. Not only of his acting, but also of his musical interests—there was always music in his home. “My family idolized two people” he recalled, “the Pope and Frank Sinatra. (Not necessarily in that order.)”

Once he was on his way, the early days were a mixed bag—one that gave him the thick skin that’s essential in show business. Davi won a singing competition sponsored by the New York State School Music Association (NYSSMA) at Seton Hall High School in Patchogue. The prize was an audition with the Metropolitan Opera, but something happened on the way to his big break. “On the train into the city for the audition, my throat was scratchy so I started taking honey lemon cough drops. Unfortunately, their sticky, chewy texture made my vocal cords seize up. It was like what happens when you squeeze lemon on a fresh clam. The clam just curls up. That was my vocal cords.” 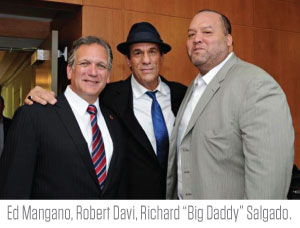 So it was back to Long Island and enrollment at Hofstra University instead of an early start in opera. After Hofstra, Davi moved to Manhattan where he studied acting with Stella Adler, Lee Strasberg, Martin Landau and others. And although his acting career began to take off, he never stopped pursuing music. Over the years, he studied voice in Italy with Tito Gobbi, at Julliard and in Los Angeles with Gary Catona.

Davi won the first of his more than 130 film and television roles at the age of 24. The TV movie, 1977’s Contract On Cherry Street, was Davi’s debut and starred his idol Frank Sinatra. After wrapping Cherry Street, Davi was flown to California for postproduction and was put up in The Beverly Hills Hotel. There, the young Long Islander made important contacts in the film industry and he soon made the move permanent. He has lived in California ever since but still returns to Long Island frequently (his sister Michelle and her family live in Mastic Beach). Last July he received the Long Island Filmmaker Achievement Award from the LI International Film Expo and called the Island the home of his “creative roots.”

Davi is also an associate of Nassau County Executive Edward Mangano, which led to two concert appearances at Eisenhower Park. The latest show, in July, drew nearly 13,000 people who heard Davi perform songs from his album, Davi Sings Sinatra: On the Road To Romance. (The record reached the sixth spot on the Billboard jazz chart.) At the concert Mangano presented Davi with a reminder of his connection to Long Island: A replica of a banner that was signed by the Grumman Aircraft Engineering workers who built the Apollo Lunar Excursion Module. Davi’s father, Sal, a Grumman employee, was one of the names on the pennant the astronauts carried into space. Receiving the gift, Davi recalled that when the original banner was planted, his father said to him, “Look, son, I’m on the moon!”

Davi is finding great acceptance and success as a singer but at the moment he’s still best known for acting. But that might change as he continues to perform internationally. His singing career is no mere vanity project and although Davi sings songs made famous by Frank Sinatra, he presents his own take on the familiar tunes. “Robert has a big voice, almost Paul Robeson-like,” said Len Triola, a Long Island-based promoter who works with Davi. “He’s not like those impersonators who, I think, embarrass Sinatra because they’re just trying to copy him. He’s Robert Davi singing Sinatra, not Robert Davi trying to sound like Sinatra.”

Hear him: Robert Davi performs Davi Sings Sinatra at the Paramount in Huntington on Nov 23.