Using found objects in art typifies the adage, “one man’s trash is another man’s treasure.” Richard Gachot, the lauded local sculptor and longtime Island resident, combines his own carvings with cast-offs to convey social commentary on a pastiche of American themes. “Uncle Sam, First Man on the Moon” and “Miss Liberty (Bartholdi)” feature American icons re-imagined. In the latter work the Statue of Liberty’s head and torch arm take on a rustic feel—a far cry from the bigger-than-life copper edifice on Liberty Island.

Richard Gachot’s America will be showing until Nov 23 at The Heckscher Museum of Art in Huntington.
(631) 351-3250, heckscher.org 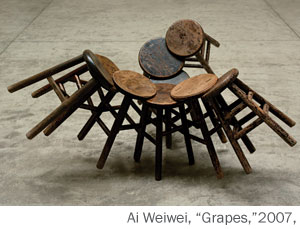 Past Traditions/New Voices in Asian Art

Oriental and occidental artistic movements have evolved and shaped their respective cultures independently in years past. But the interconnectedness of the modern world is beginning to merge all aesthetics. Artists spanning Asia from India to Japan offer powerfully non-representative works in two and three dimensions. Evoking shades of Marcel Duchamp’s readymades, Ai Weiwei’s “Grapes” is a set of stools from China’s Qing dynasty (1644-1911) that seem to defy gravity as they bond together. Nyoman Masriadi’s “Chicken Dance” is a canvas depicting a whimsical hybrid with a chicken head and human body doing a soft-shoe in an open door.

Past Traditions/New Voices in Asian Art is on display until Dec 10 at the Emily Lowe Gallery, Hofstra University.
(516) 463-5672, hofstra.edu