Imagine Plum Island as something other than the Animal Disease Center that it is today and people would think you’re crazy. But long before it was used by the Department of Homeland Security to study foreign animal diseases it was occupied by soldiers at Fort Terry.

Those soldiers had to keep occupied on the island just off the coast of the North Fork, so they took to open land and played sports. Photos of the athletic history on Plum Island are currently being featured in the administrative complex on the island in an exhibit supplied by the Southold Historical Society. Tours and access to the island are by appointment for approved groups only.

At the time, it wasn’t easy to attract and maintain a fit, fighting force for the United States Army prior to World War I. 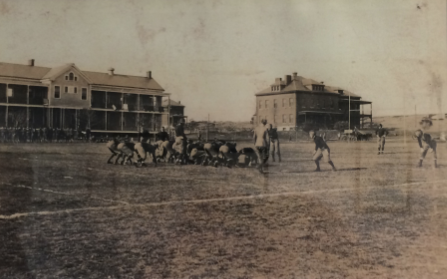 The military encouraged men to participate in various sports and to form teams with their companies. At Fort Terry, there are acres of open land that was once home to football and baseball fields. Soldiers also boxed, swam and took part in track and field activities. The structures from Fort Terry are still standing on the island.

Soldiers often played against other competition from around Long Island and Connecticut.

Fort Terry was a coastal fortification and defense area to protect New York and America from foreign invaders and enemies. It was established in 1897 and used through the end of World War II.

The photo collection is on loan from Bolling Smith and the Coast Defense Study Group who is dedicated to the study and preservation of U.S. Coastal Defense Structures.