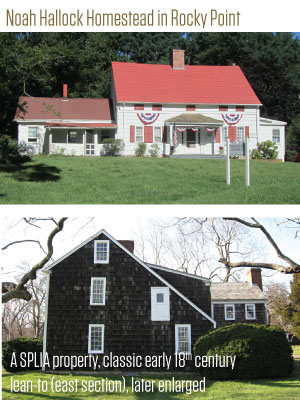 Long Island has served as a font of creativity and a laboratory for home styles for centuries. Many designs that have spread across the country, like Cape Cods, saltboxes, Dutch Colonials and center hall Colonials, can be traced back to the Island during the 17th and 18th centuries. And as most learn in grade school, Long Island also had a leading role in the genesis of suburbia itself.

Barbara Van Liew, an influential preservationist who died in 2005, even compared Long Island to the ancient cradle of western civilization: “Long Island is the Mesopotamia of this country from whence springs everything worth celebrating and protecting in American architecture and culture.” The Island’s location as an entry point by sea and its proximity to New York City help to account for its architectural abundance, said Alexandra Parsons Wolfe, director of the Society for the Preservation of Long Island Antiquities: “It all happens here.”

Southampton town historian Zachary Studenroth called Long Island a “trendsetter during the earliest settlement period,” when the Dutch were predominant in the west and the English owned the east. The earliest example, Old House, sits on the Cutchogue Village Green maintained by the Cutchogue-NewSuffolk Historical Council. Built in 1649 by wealthy English merchant John Budd, it is the oldest English-type house in the state. Few people today build houses like it—Studenroth called it “medieval looking” because of its small leaded casement windows and massive chimney—but its simple lines inspired other kinds of homes, some of which continue to be popular.

Houses like Old House were expanded by adding a lean-to or single-story structure in the back to become what are now called saltboxes, Studenroth explained. By the 18th century when people wanted even more space, they connected two houses of that old shape or built two new ones side by side, creating a center hall. This form is the same center hall Colonial house we still have, he said. And it survives in suburbs across the country.

By 1824, homes like the Nathaniel Rogers House in Bridgehampton were helping to lead the way in a new American style: The Federal period that grew out of the Revolutionary War. “You have to imagine: We just won the war and English style was out of fashion,” said Studenroth. Several fine examples of these homes featuring columned porticos remain on Long Island. The Rogers house was substantially renovated in 1840 and is now undergoing a massive restoration to open to the public by 2015, said John Eilertsen, executive director of the Bridgehampton Museum. The circa 1721 Noah Hallock Homestead in Rocky Point, which had Greek Revival details added in the 1830s, also underwent restoration to become a museum and cultural center and was opened last year.

Another form that appeared early in the 1700s was the Cape Cod, Studenroth said. Low and compact, it is able to withstand coastal winds and, despite its name, started appearing on Long Island at about the same time that it did in New England, allowing Long Island to claim a bit of the credit for this enduringly popular shape. Still, although our region shares recognition for its origins, it’s what this style became on Long Island that’s more notable. Developer William Levitt selected the Cape Cod as the shape for homes in the world’s first mass-produced suburb in 1947 in—you guessed it— Levittown. It set the stage for the rise of suburban sprawl from the 50s to today.

Levittown arrived in the middle of the modernist movement, said Caroline Rob Zaleski, author of Long Island Modernism 1930-1980. At first Levitt considered a flat-roofed modernist house, but according to Zaleski, “he chickened out and went with an open plan inside a historical style, so it was quasi-modern.”

“Long Island was pivotal in the development of modernism,” she added. The movement, which included the International Style, was characterized by open floor plans, a design that tucked into the landscape (like split-level homes), large plate glass windows and patios that could be used as outdoor rooms. Dozens of show houses were built on Long Island to promote the style including Holiday House in Quogue, which was built in 1950. “People lined up for miles in their cars to see it,” she said. “These show houses had enormous influence.” Although most were later sold to individuals, as was Holiday House, many of the visitors who saw them commissioned similar homes in other areas of Long Island as well as the rest of the country.

In several cases, architects who cut their teeth designing such projects on Long Island went on to create iconic structures around the world. Richard Meier—who designed the Getty Center in Los Angeles, a $1.3 billion project that opened in 1997—received so many commissions on Long Island at the beginning of his career in the 60s and early 70s, Zaleski wrote, “it is fair to call it a laboratory in which his career took shape.”

Back in 1962, he was not yet getting billion-dollar commissions. Instead, he was hired to design a beach house on Fire Island for $11,000, a modest budget even then. Inspired by his boss at the time, Marcel Breuer, Meier combined rustic materials with “dynamic structural and spatial features,” Zaleski wrote. Those are qualities he is still known for today, whether he’s working in Germany, Mexico or Brazil, the sites of three recent Meier projects.

He didn’t abandon Long Island in his mature years, though. His United States Courthouse and Federal Building in Islip, completed in 2000, “seems to spring from concepts he developed in his houses,” Zaleski wrote, “and it stands as a fitting bookend to the architect’s long and productive association with Long Island.”

Meier’s homes and others designed by such illustrious architects as Frank Lloyd Wright, Walter Gropius and Edward Durell Stone, Zaleski said in her interview, are “part of our Mesopotamia, an archeologist’s dreamland.”

Find out more about Richard Meier’s influence on architecture and Long Island homes in Alan Semerdjian’s interview with the architect at lipulse.com/meier