The gradual and sometimes spasmodic gentrification of Long Island City continues. And the SculptureCenter (44-19 Purves St) is no small part of it. One key to artistic migration is space, and the SculptureCenter has scored in a big way, literally. To inaugurate its newly renovated, re-imagined and expansive square footage, the SculptureCenter will feature the works of multiple artists in Pothole, Puddle, Portal starting Oct 2. 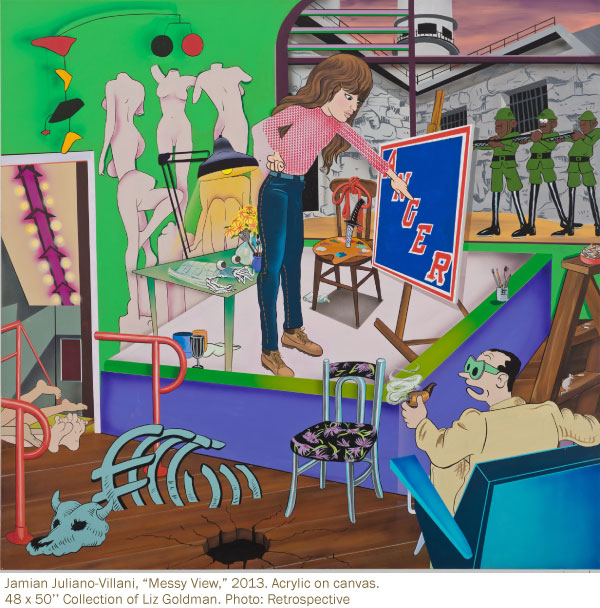 “The title refers to types of spatial phenomena that are ubiquitous and transitory, although they have the potential to be something other than what they seem, suggesting openings into other realms,” said curator Ruba Katrib. “The puddle is natural, the pothole urban and the portal more technological and virtual.”

Ponder it for a moment and it makes perfect sense. Pothole, Puddle, Portal could be the secret code to gentrification and the artistic genesis that so often drives the movement of energy, community and money into certain neighborhoods. The name of the exhibit indirectly articulates the migratory process. When we set out to re-create ourselves, to find new space, what we see might not be pretty. In fact, it might very well be a significant hassle. But if we’re able to navigate the inconvenience, to deftly sidestep the problem, then who knows what may be in store on the other side?

“Long Island City is rapidly transforming and that change is particularly acute in our area around Court Square,” said Mary Ceruti, executive director and chief curator of the SculptureCenter. “Our block has gone from a small street of warehouses and car repair shops to condominiums filled with young professionals and families. While we regret that we have to go further to buy hardware or source sheet metal for our projects, these new developments have brought a new audience to us as well. We have launched new family and community programs to engage these new neighbors.”

The exhibit is an exercise in pushing boundaries, both physical and meta-physical. SculptureCenter is big on play and curiosity; a sense of humor and whimsy underlies both the new works in the exhibit and the curation of the exhibit as a whole. The overall effect is cartoonish, oversized, distorted and rife with tomfoolery—putting the viewer in a state of delighted bewilderment.

The work of Saul Steinberg, well represented in the exhibit, depicts this lightness of being and bemused absurdity. His drawings using ink, colored pencil and crayon are kaleidoscopic and confusing premonitions of some yet unrealized faux apocalypse, exploring relationships between objects and space that both articulate and exaggerate the boundaries of the imagination.

“Bank Street (Three Banks)” (1975), a psychedelic yet minimalistic imagining of a robbery gone wrong, is both hilarious and sinister as little mushroom men mow down spooky rabbit heads with machine gun fire. Steinberg’s “Untitled” (1971) evokes the Blue Meanies of the Beatles’ Yellow Submarine—clownish heads walk on elegant legs, smiling, prancing and maybe even shopping? It’s hard to tell and it’s hard to care. The overall effect inspires laughter, which is more than enough.

While Steinberg’s drawings explore space and object relationships on a flat surface, other sculptures in the exhibit do so within the context of the airy brick-walled museum. The result is a vibe that is retro and mod, vintage and cutting edge. Working within those wide parameters, Mick Peter’s sculpture, “Albert and Jenny” (2011), uses acrylic resin, wood, latex, ink and plastic to put a perplexing twist on a simple child’s chalkboard. The board has been shot through the heart with huge pieces of chalk that penetrate the surface like arrows. Was it a gleeful experiment gone wrong? Was it a fight between two playmates that led to this carnage? Again, we’re left to wonder—and that’s the end result.

Judith Hopf’s “Lily’s Laptop” (2013) is another head scratcher. It’s a coupling of video stills that show the before and after of what might be a tragic broken pipe somewhere. In the first image, a fantastic depiction of cascading floodwater pouring down a staircase captures that moment when we’re frozen in shock when confronted with a domestic nightmare and we can’t do a goddamned thing about it. The second image shows the aftermath, with the subject marooned on top of a lab desk trying to save her computer. Tragic, yet comic. 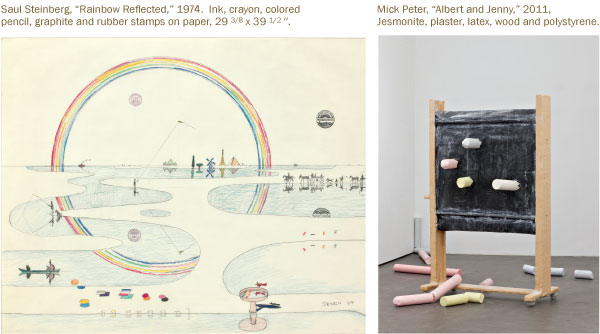 And that’s the spine of Pothole, Puddle, Portal. Hiding in plain sight, as Long Island City continues to evolve and grow around it, the SculptureCenter invites us to inhabit another world where goofiness masks complex questions about what’s real, and more importantly, about what’s important. The rhetorical answer seems to be, “Nothing. And everything.”