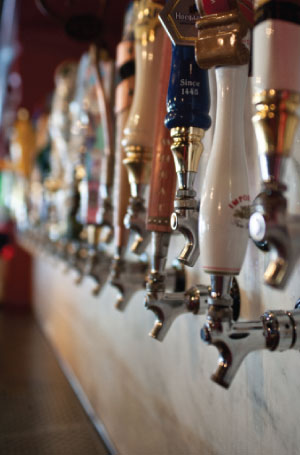 Tagline: The next station is Croxley’s.

What To Know: Croxley’s has expanded to six locations, including two in New York City, with a transparent format centered on beer and wings—the former upscaled by hefty craft-dedicated lineups and a discernable stance against macro-produced lagers.

Each outpost isn’t a facsimile of the 22-year-old progenitor in Franklin Square though. “We build each spot with a different sub-theme in mind,” said co-owner Christopher Werle. Smithtown’s is Germany: A standalone six-draft tower pours Hacker-Pschorr, Hofbräu and Warsteiner into half-liter and liter mugs; food includes wienerschnitzel, sauerbraten and hefeweizen-submerged mussels, and an outdoor biergarten is arrayed with 35 communal tables formerly used by Paulaner at Oktoberfest. The backyard practically adjoins a trestle for the Long Island Rail Road, decidedly proving Smithtown is an easier commute than Munich

What To Drink: Paulaner or Warsteiner’s Oktoberfest. When in Rom—Munich…

Also: The menu of 80 drafts isn’t confined to Germany. A dozen-ish are dedicated to Long Island (which includes Brooklyn Brewery and Red Hook’s Sixpoint) and several worldwide powerhouses are mainstays. Firestone Walker’s Union Jack IPA, superbly balanced, is arguably the style’s best archetype in any country, while Gulden Draak represents the expertise of Belgium.

Tagline: The Adventures of Fondue & Fonbrew!

What To Know: This compact, boisterous and art-driven café, where queues routinely extend onto the sidewalk, is revered for breakfast—gems include sweet potato waffles and Nutella-drizzled French toast. But Toast is equally venerable for late night fondue. Its newest noteworthy however is available at any hour: Fonbrew, my nickname for a bottle-only, American-focused lineup featuring selections from Bear Republic, Two Brothers, Great Divide and North Coast.

What To Drink: The sole menu for beer is scribbled on a small chalkboard stationed at the six-stool counter. “I’m rotating stock every few weeks so the options are constantly different,” said manager Robert Edwin, who, as he erased and rewrote, also promised the addition of “four to six drafts probably by the end of the year.” The latest bottles include Stone’s Go To IPA, danky and melony with manageable-yet-assertive bitterness, and the wheat-prominent Oberon Ale from Bell’s.

Also: The fonbrew, similar to the fondue, has chocolatey options shareable between two humans or more. I recommend a 22-ounce vessel of Weyerbacher’s Heresy, a bold, bourbon-barrel aged stout.

Profile: This rust-colored cryptid strays from the beerforest annually for only three months on a mission to, er, squash autumn’s typical flurry of pumpkin-heavy offerings. The antithetic ale is brewed with butternut squash, dried ginger, clover honey, Sichuan peppercorns and Saaz hops. A unique and tasty example of cryptobrewology.