It’s something so basic it happens daily, and therein lies the problem. The simple act of sitting—at a desk, on the couch, in the car—is the latest pox on society, resulting in all manner of ills from poor posture to debilitating back pain to brain fog. Couple that with what often happens while seated—work, an activity nearly synonymous with stress—and those ailments are compounded.

Fortunately, there are ways to beat the seat. Many people have found relief from the binds of a sedentary existence through a variety of wellness modalities designed to alleviate muscular tension and re-educate posture, movement and breathing. These bodywork therapies, offered by skilled practitioners, put patients in the catbird seat.

ALEXANDER TECHNIQUE: KEYING INTO COORDINATION
What it is? in the early 1900s, Australian actor FM Alexander, who struggled with vocal hoarseness, discovered that misalignment of the head and neck, poor posture and inefficient breathing were causing his problems. Through the development of his technique, Alexander learned how to integrate breathing, posture and body awareness to correct many bad habits and movement patterns caused by internal tensions.

How does it work? A trained practitioner gently guides movement adjustments to redirect energy and posture patterns, effectively training the body to move more mindfully and without tension. Corrections are done standing and seated and through normal activities like bending, walking and reaching. “Through verbal instruction and simple, manually guided movements, i help my students change how they perceive movement, giving them the experience of using their body with significantly less tension,” explained Leland Vall, a certified Alexander Technique instructor in Great Neck. in a session, a client might be told to sit and stand from a chair to realize the motion was being engaged with unnecessary muscle gripping and poor movement patterns. “Through the course of a lesson, i guide the student through a different way of using the chair, and the student is usually very surprised at the ease and power of the result,” Vall said. A minimum of five lessons is suggested and what’s learned can be practiced without an instructor.

What are the benefits? The most profound changes are correcting poor posture and alleviating headaches and backaches, like those that come from sitting at a computer for eight hours a day. The increased body awareness can improve posture even while seated, effectively undoing the damage.

FELDENKRAIS METHOD: IMPROVING MOVEMENT AND BALANCE
What it is? The Feldenkrais Method was developed in the 1950s by physicist and judo black belt Moshe Feldenkrais who sought relief from knee problems and other injuries. He based his lessons on the concepts of biomechanics and neuromuscular function to become more fluid, efficient and comfortable. in fact, “often, to the bewilderment of our clients, we work some place other than the affected area, with the thought that the painful part knows pain really well and doesn’t need that message reinforced,” said Maria Whisenand, a Glen Cove-based practitioner.

How does it work? sessions begin with test movements in which the student follows the teacher’s cues and the teacher analyzes problem movement patterns. The bulk of a session is generally performed while lying down, moving and adjusting the body based on both verbal and manual guidance from the instructor to ease tension in overworking muscles and show new movement patterns. “Most people describe it as very relaxing. They feel very calm and centered when they leave,” Whisenand said. Group classes progress similarly, with the instructor relying on only verbal cues to direct students through what often feels like a gentle stretching class.

What are the benefits? Feldenkrais can help people who suffer from acute chronic pain, particularly in the joints, neck and lower back trouble spots exacerbated by poor seated posture habits. Because of its neuromuscular nature, sufferers of multiple sclerosis, cerebral palsy and stroke have been helped, as have older adults who want to regain range of motion and balance lost in the aging process. Not just for the infirm, Feldenkrais can benefit anyone who seeks facility of movement. “It’s a bit like having a toolkit to go to if you are having difficulty,” said Whisenand. “I teach movements that can be used when a problem begins, as opposed to waiting until the pain is unbearable and then getting help.”

MYOFASICAL RELEASE: ALLEVIATING THE PRESSURE
What it is? Popularized by physical therapist John F. Barnes in the 1970s, myofascial release (MFR) is the idea that body tensions, discomfort and pain may originate not in the muscles, but in the fascia surrounding them. “everything—muscles, bones, organs— in the body is surrounded by fascia, a continuous connective tissue that holds it all together,” said Stephen Sanacore, a licensed massage therapist and Barnes- instructed myofascial release expert in Roslyn Heights. “Because the fascia is completely interconnected, if one area experiences trauma, symptoms can be experienced elsewhere in the body—like when a sweater gets a pull, that fabric can be bunched or disrupted in another spot. it’s the aim of MFR to find the cause, not just treat the symptoms.”

How does it work? Treatments begin with a medical history followed by a posture assessment so the practitioner can view imbalances or restrictions. The practitioner applies sustained pressure to the fascia, easing out tensions, which feels like a gentle form of stretching. “With a sore neck, i’ll provide sympathetic care to the aggravated areas in the back, but then spend time releasing the tightnesses in the front of the neck that are likely the cause of the pain,” explained Sanacore.

MFR also includes gentle, prolonged tissue manipulation (rather than deep or vigorous) with a foam roller or soft ball at home. Treatment occurs as often as needed, though Sanacore recommends allowing days off so body tissue can settle in to its new state of being.

What are the benefits? MFR is focused on alleviating restrictions in the body, making it effective in uncoiling the effects of a hunched desk posture. In addition to remedying the usual aches and pains, Sanacore has used MFR to ease post-surgical recovery (even years after the fact), the agony of fibromyalgia and other chronic pain or stress-related ailments. “We’re not healers, but rather nudge the body in the right direction to heal itself,” Sanacore said. But he conceded he’s often the last option for people who’ve found no relief from traditional medicine or massage techniques. 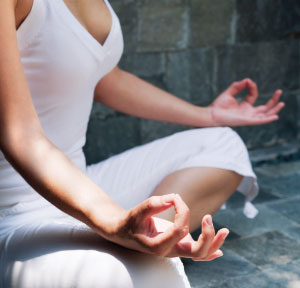 TRANSCENDENTAL MEDITATION: PUTTING MIND OVER MATTER
What is it? A good kind of sitting, transcendental meditation (TM) comprises two 20-minute periods per day of mental and physical calmness. it was created in 1955 by indian guru Maharishi Mahesh Yogi, the famed mentor of the Beatles who introduced the technique to the west in the 1960s and 70s. Contrary to popular belief, TM doesn’t require a dogmatic philosophy or an uncomfortable cross-legged posture. “These things become more work,” said Harry Martinian, Director of Programs at the Transcendental Meditation Center of Long island in Garden City. “TM is not work at all. Believe it or not, people are sitting on the railroad from Jamaica to Penn station meditating.” The process involves a mantra, a simple phrase repeated, allowing the brain to find quieter levels.

How does it work? TM isn’t learned from a book or DVD, it must be experienced. Through a series of four sessions, a qualified instructor explains the process. After that, it can be done solo just about anywhere that’s semi-private—like an office or on lunch break. Done twice-daily, the active mind settles down, improving mental clarity and putting the body into a state of deep relaxation to better confront daily stresses (adios, brain fog).

What are the benefits? TM’s effects have been scientifically verified to have profound impact on a number of mind and body ailments including reduction of stress hormone levels and blood pressure, improved sleep, reduced risk of heart attack and a decrease in tension-related ailments—all of which a sedentary lifestyle can cause

“One doctor i know specializes in helping people with TMJ [a teeth grinding and clenching disorder],” said Martinian. “He’s a world-renowned expert and month after month he sends people to try TM because he realizes it can be caused by persistent stress.” Martinian said sufferers of attention-deficit hyperactivity disorder (ADHD), post-traumatic stress disorder (PTsD) and those with anxiety or life changes like divorce or substance abuse rehab can also benefit.

Ditch the chair
Unfortunately, being seated at a desk is part of the job description for most of us. Step up to break up all that sitting.

Stand more. Even just being upright is a healthy break for the body. A standing desk, or one with an adjustable height, increases time upright without reducing productivity. Either way, make a point to stand up every 20 minutes (even stretch a little) and don’t sit during phone calls.

Move more. During the workday, visit coworkers rather than calling or emailing, pick up lunch rather than having it delivered and schedule walk-and-talk meetings whenever possible. In general, take the stairs, park far from the door or walk from the train station whenever possible. Before long, all that movement will be a natural habit.

Where to seek treatment
Local and online resources for finding relief.