In 2002, the Long Island arts industry employed more than 2,000 people, generating payrolls of $73,810,00. By 2008, the most recent information available from the U.S. Census Bureau’s County Business Patterns, the arts industry on Long Island employed more than 3,000 people, generating $142.8 million in payrolls. In other words, employment increased in the industry by 50 percent and in payroll by more than 93 percent. And yet the arts on Long Island still often live in the shadow of New York City.

People jump on the LIRR to see a show or exhibit in the city, but Long Island gallery owners, musicians and actors are trying to change that and remind people of the arts right here on the Island.

“We’re trying to shine a spotlight on the arts on Long Island,” Theresa Statz-Smith, executive director of the Long Island Arts Alliance said.

The Long Island Arts Alliance is a network of the Island’s not-for-profit arts and arts education organizations that attempts to promote awareness and participation in Long Island’s arts and cultural institutions.

Last weekend, the third annual Arts Alive LI Month kicked off to do just that. Presented by the Long Island Arts Alliance and Bethpage Federal Credit Union, Arts Alive LI is a celebration of art and culture on Long Island. Through Oct. 31, more than 100 events, many of which are free, will take place at 40 venues including music, performing arts, exhibitions and festivals. A complete list of events and downloadable prize coupons offering the chance to win a North Shore ARTventure, an East End Family Getaway or a Long Beach ARTventure, are available on the Arts Alive LI website at www.artsaliveli.org.

“We want people to get of the house,” Statz-Smith said.

This year, the focus of Arts Alive LI is on the venues and trying to remind people of all the places they can partake in the arts on the Island.

Long Island’s Traditions participated with Working the Waters at the Tobay Boat show on September 26-28. The exhibit was a first-hand public account of the historic traditions of the Island’s commercial and recreational fishermen, the factors affecting those traditions and the future of fishing on Long Island. 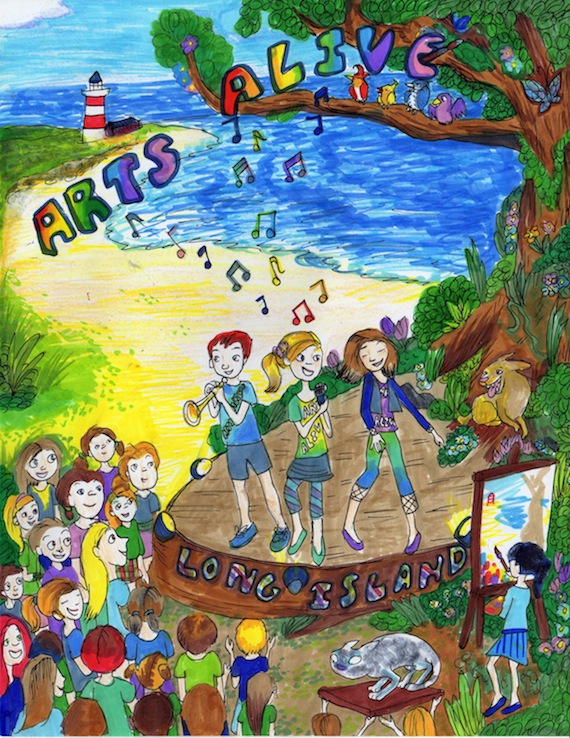 The Long Island Children’s Museum is one of a number of venues hosting multiple Arts Alive LI events. During the month of October, the 2014 Arts Alive LI Commemorative Poster Series exhibit will feature the 10 winning from the poster contest including the poster of grand prize winner, Audrey Zhang, of Island Trees Memorial Middle School in Levittown who was this year’s Google National Doodle Contest winner.

“The arts are vey much a part of the economic well being of Long Island,” Statz-Smith said. “The industry creates jobs that can’t be outsourced.”

Go celebrate that industry this October.