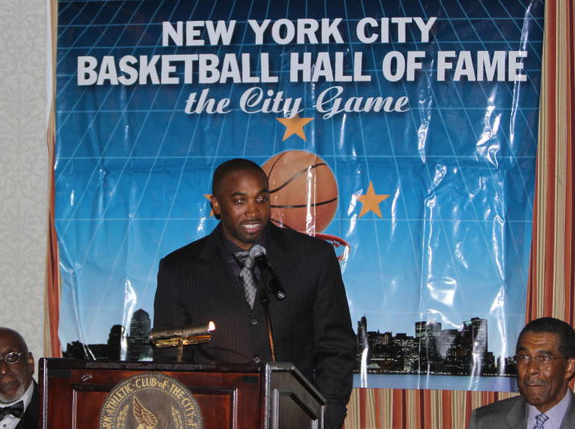 The honors keep piling up for Hofstra and Long Island basketball great Speedy Claxton. He was inducted to the New York City Basketball Hall of Fame earlier this month.

Already a member of Hofstra’s Athletic Hall of Fame, Claxton jumped on board as an assistant coach with the basketball program last season after spending the previous two years as a scout with Golden State in the NBA.

The Speedy Claxton File (Hofstra)
• Graduated from Hofstra in 2000 as one of only six players in school history to score 2,000 career points (2,015)
• Graduated as the program’s all-time leader in both assists (660) and steals (288)
• Two-time Player of the Year selection in the America East Conference (1998, 2000)
• Named the 2000 winner of the Haggerty Award, given to the top player in the Metropolitan New York area, after leading Hofstra to an America East Conference championship and its first NCAA Division I tournament berth in 23 years