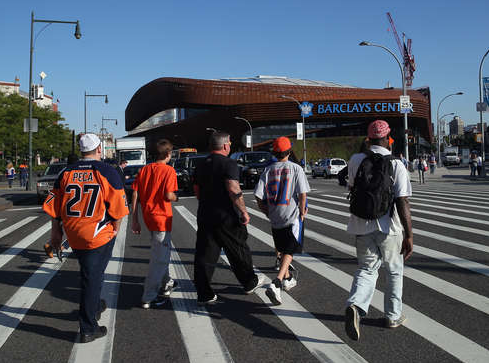 Perhaps the greatest line written about the Islanders pre-season game against the Devils in Brooklyn was from the Isles Point Blank blog on SNY: “After two trips to the Barclays Islanders Head Coach Jack Capuano wasn’t ready to say the building felt like home.”

“It’s a great venue,” Islanders coach Jack Capuano told Point Blank. “There’s no question it’s a beautiful place. We know we’re going to be here at a certain point, but it was good to come. Preseason and now we have to focus on the Coliseum and our fans there.”
Barclays CEO Brett Yormark told Newsday that this year’s pre-season game felt like a dress rehearsal compared to the first go on ice in 2013.

“We’re that much closer to it being a reality and we’re trying to refine the experience for our fans,” he told Newsday.

There were between 11,000 and 12,000 fans in attendance, but not near the 15,000 full capacity the Barclays can hold. The Coliseum, if all goes right, should see more sellouts this season then usual, and possibly the most since the 1980s.

–The team has not yet updated its shop website with any “Farewell Coliseum” items. Check “Orange & Blue” sometime in October to see what the team is doing in the team shop at the building.

–It was announced that Denis Potvin’s mini locker will be available to fans who have full-season tickets. This is part of a season-long collection of locker stalls, which also include Billy Smith, Clark Gillies and Bobby Nystrom during the first half of the season. There will be others in the second half as well. Potvin will be on-hand at the Coliseum on Nov. 29 as the organization honors him.